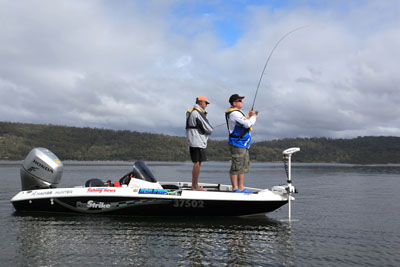 After a year off for both Mike Stevens and Leroy Tirant joined up for the first time and came back with a vengance. A well executed plan started with a comprehensive look around Georges Bay on Friday prefish.

Fishing from Mike's BF150 Honda powered Haines Hunter Pro Strike, Saturday started slowly, but once the bag was full (5) of small fish the pair went looking for upgrades. The fish came slowly, but steadily, and by the end of day one the smallest fish was 35 centimetres. Combined with the other four good fish it was 650 grams ahead of second place.
Videographer, Craig Rist had been invited along to film some bream action and rather than handicap the team, it seemed to bring them good fortune. Craig's work has featured on "The Source" and his short fishing movies are highly regarded, but commercially available.
Leading out of the blocks on day two, Mike and Leroy stuck to their plan, but targeted bigger fish from the start. It took longer to get the five fish necessary in the live well, but with an hour to go the bag was similar to day one. With the live well pump giving up the ghost Stevens and Tirant decided not to risk a fish going belly up and weighed in early at 1.30 p.m. Something that teams up the front rarely do.
Successful techniques for the champion anglers did not vary all weekend and consisted of Lucky Craft Flash Minnows and Lucky Craft Tango lures, combined with three pound fluorocarbon straight through.
Stiffy Prowlers also got a run, but the soft plastics stayed in the hatch.
A new Minn Kota ipilot - specially overnight delivered on Thursday before the comp. was also invaluable. This new piece of GPS technology replaces autopilot on several Minn Kota models and has some unique features. It can follow a programed track, go back along the same track and hold you stationary in wind and current without needing to adjust speed or direction. It makes controlling the boat much more simple and takes a lot less input, which gives more time to concentrate on the fishing.

Another report from www.sportsfishtasmania.com forum.

Marvellous conditions greeted the 25 starting teams in round one of the Spirit of Tasmania Bream Classic series.
After a fun filled Howler Custom Rods briefing, where Tim Colgrave won the Howler Custom rod, valued at around $300, teams soon filed off to their respective dens.
Great Conditions
In cool and overcast conditions and light winds, the teams snaked their way slowly to the end of the 5knot limit before dispersing to all corners of Georges Bay.
With tides suiting the flats style angler, many teams headed for shallow water to fill their five fish limit.
Plenty of Fish
During weigh in it soon became apparent that this was going to be great day, with 18 out of 25 teams recording a five fish limit, and only one team bringing donuts to the scale.
Some quite large bream were weighed in, with several contenders for the Tackle Us Big Bream amongst them.
Weights include the bream bags, so all weights are 495grams heavier than actual weight.
As it was last year, Kenny Beatson holds the big bream lead with a cracker at 1.93kg (including bag).
Team Roz Homes and Construction won the Strike Pro encouragement award for Day One, which includes some hand picked Reaction Baits and some Strike Pro hardbodied lures.
Stevens and Tirant on Top
Mike Stevens and Leroy Tirant hold a good 650gram lead after day one, however all it will take is for teams placed down as far as tenth to have a great day and it becomes extremely tight at the top.
The winner of the round will receive $1000.00, $500 for second and $300 for third, with Squidgy prize packs for teams down to tenth.
Most teams were tight-lipped about techniques and locations for today’s session, but all will be revealed after day two of round one of the Spirit of Tasmania Bream Classic.

Day two of the first Spirit of Tasmania Bream Classic round saw a continuation of the consistent fishing from day one.
Teams set off in a constant drizzle, with Team Tasfish.com – Bigfin leading the pack out onto Georges Bay to protect their 650gram lead from day one.
All boats made the most of the run-in tides and overcast conditions to try and capitalise on the shallow water bite in the early stages of the session.
While some teams felt that the fishing was tough, all teams managed to bring fish to scales, including some thumping contenders for the Tackle Us Big Bream.
212 bream were weighed in over the two days between 25 teams, which will certainly make competitors for the ABT qualifier in March very happy indeed.
Third placed Team www.sportsfishtasmania.com of Leigh McKenzie and Patrick Sullivan weighed in a 10 fish bag of 9.97kg (including bag), and caught most of their fish on hardbodies fished over the flats in quite shallow water. Event though fish were coming to the hardbodies, McKenzie experimented with soft plastics for very little result.
Second placed Team Ecogear/Nitro used the same sorts of tactics, and hunted out the bigger bream for the top bag for day two.
However it was Team www.tasfish.com - Bigfin that held their day one lead to take out round one of the Spirit of Tasmania Classic.
The team consisting of Mike Stevens and Leroy Tirant used a variety of hardbodied lures on the flats to quickly compile a decent bag. Mike Stevens commented that a great deal of their angling efficiency was due to new technology from Minn Kota which enabled the team to hold position with the electric bowmount using GPS technology rather than the auto-pilot function.
Together with a range of hardbodies from Lucky Craft, and a Stiffy Minnow, the team cemented their reputation as the ones to beat in this year’s in this years Spirit of Tasmania Bream Classic Series.
The Tackle Us Big Bream was caught by Andrew Kruska with a thumper of 2.12kg (including bag), which less the bag weight would have come in around 1.6kg.
Teams now prepare for the second round on the Swan River in mid April.
Many thanks to all sponsors: Spirit of Tasmania, Squidgies, Daiwa, Ecogear, Pure Fishing, Tackle Us, Howler Custom Rods, Tasman Door Centre and Warwick and Sally Medwin for their super-generous donation of 2x $100 fuel vouchers for each round. 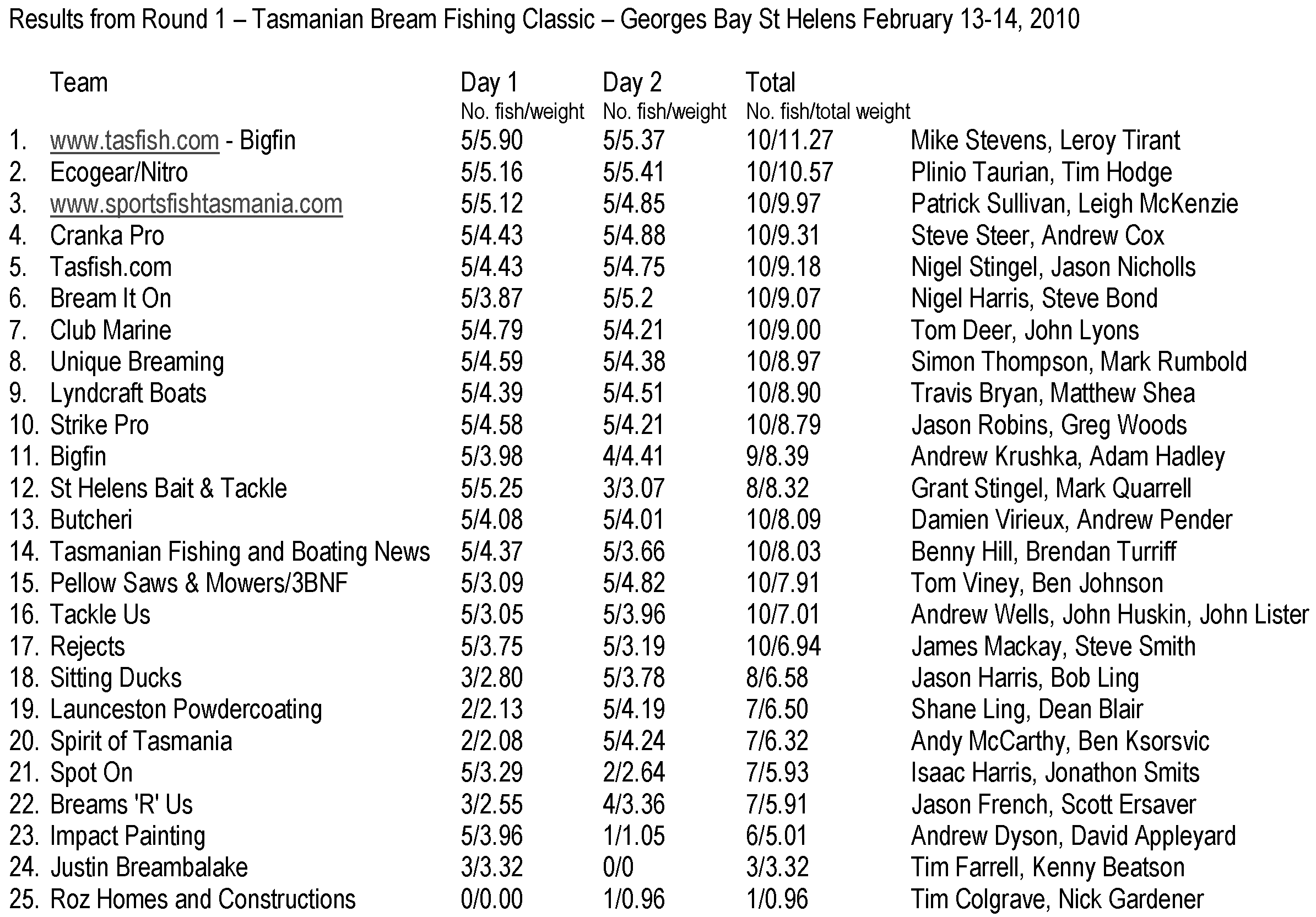