Presented from Issue 109, April 2014
With cold weather and rain just around the corner, it is almost time to say goodbye to another trout season. Many of you will agree with me that the last month of the trout season in Tasmania is generally very productive. For me, April is an exciting time. I spend most of it targeting places like Arthurs Lake and Great Lake. I also concentrate on Four Springs Lake, which is only 30 minutes away from my home in Launceston.

While these are all great fishing spots, there is also another option that is even closer to home. It fishes well at this time of the year and is a spot that should not be overlooked. The North Esk River is the place I am referring to. Launcestonians are often put off by the mere appearance of the very ‘silted up’ North Esk River. If you cross the Lower Charles Street Bridge on a daily basis, you will know what I am talking about. This is the end of the North Esk, one of the Tamar River tributaries.

Presented from Issue 100
Having moved to the North East of Tasmania several years ago I set out to explore my local rivers and found them to be vastly different from the Mersey where I grew up. The rivers up this way tend to be much smaller, shallow sandy-bottomed streams. One of the first rivers I fished was a tributary of the George River, the Groom. It was early October and a nice sunny day as I headed north out of St Helens. As I went I stopped on each of the river bridges to have a look. I found the George River to be a little higher than what looked to be normal and discoloured so I continued on.

A few kilometres up the road I came to the Groom River and once again parked the car and had a look downriver from the bridge. This stream was also a little higher than normal but most sections flowed over a broad flat sandy bottom ranging between 30 and 50 cm deep. Much to my surprise looking downriver from the bridge I could quite clearly see five or six small fish feeding over the sand.

In a Nut Shell
Basic Facts about fishing northern rivers in August and September:

Three Great Days on a Couple of Rivers

Three Great Days on a Couple of Rivers

Day One, 18/11/2014
Headed on over to Lake Leake to catch up with Samuel and Connor who are also well known as the "'Lake Leake Boys'" to have a couple of days spin fishing the Elizabeth River. I checked in at the Lake Leake Inn with mine hosts Jan & Walter Milner who always greet their guest with a warm and friendly smile. After lunch (which was great & very filling) I headed on over to catch up with the Evans family and was met with another warm welcome at their household too. It was good to see them once again as well. Samuel wasn't around as he's working two days a week now with his Uncle in the building trade doing work experience as a carpenter which is a great trade to get into.

Read more: Three Great Days on a Couple of Rivers 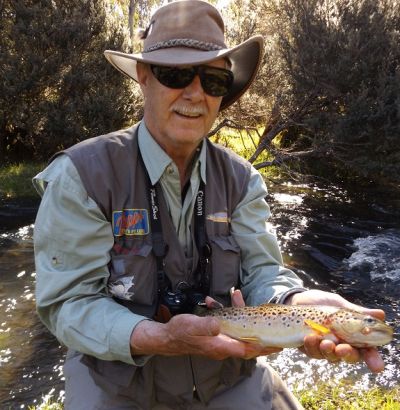 With Adrian Webb up our way for a few days, we decided to give the Elizabeth River a smashing session using the Mepps spinners. We arrived at the river at around about 2pm, where we got the gear out of the car, threw on the waders and started walking down the river. We walked a good 2.5km past the Weir, where we worked our way back up the river
The first 1.2km was unsuccessful, with only seeing 4 small trout that were easily spooked. Where I then swapped to a silver Aglia, and cast in to the faster running water where this little fish started playing up! First fish for the day, a nice little brown that was about 200grams. Back in the river he goes. We then walked through a heap of long grass, where Connor had caught a lovely brown that was about 340grams. A few photos and back in to the water he goes. In this time Adrian had caught a lovely brown around the 200gram mark as well.

A few pics from todays fishing session at the Sth Esk river.
George and I caught 12 trout. I got mine on softies and George caught a few on fly.
Cheers Phil.
Click read more for pictures.

Arrived at the South Esk with George Papp around 11am and fished till 3pm. I used soft plastics, while George tried the dry fly. We managed twelve between us and i got onto a couple of beauties around the 3lb mark, which were kept for a feed. The rest were released. Saw a few moving on top to caddis and spinners. Caught mine on Berkley Black & Gold T.Tails,and George got his on a hopper pattern. All fish were in top nick and fought hard, but this will be our last trip for the season.

I had a couple of hours off today so I decided to hook on the tinny and explore the South Esk River in my little 12 foot tinny. I managed 7 in very short time, 3 taken on a klinkhammer dry and the rest on the orange bead - head nymph. 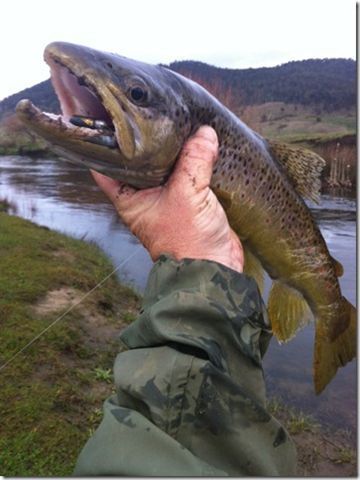 As soon as school finished, Bailey & I had a look at the Upper Nth.Esk River this afternoon. The river was still running clear despite all the rain, we found the fishing a bit hard. We managed five brownies up to around 2lb, all caught on black n gold t.tails. We dropped a couple as well.