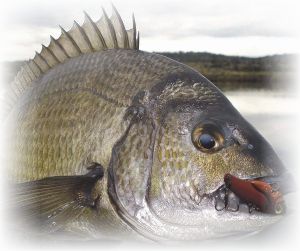 Presented from Issue 106, October 2013
The start of daylight savings excites the trout fisher as it signifies the general start to the mayfly season; an insect that causes many a trout angler to become obsessed, chasing that hatch like a moth to a flame. Many anglers who chase trout also target bream but at this time of year, as trout anglers are in such a mayfly-induced trance, thoughts of bream become nullified. For the sneaky bream angler, this is a gift, paving the way for cheeky little solo sessions and all-round good times for you and your mates!

Where are they hiding?

Many readers would be aware of southern black bream (Acanthopagrus butcheri), but it is regularly surprising how few Tasmanians have ever seen such a fish, let alone catch one. They can be encountered anywhere from the Inglis River in Wynyard all the way clockwise across the north coast, up and down the east coast and as far as the Southport Lagoon in the south. Estuaries, rivers, creeks and coastal lagoons can all contain bream, providing they open out to the ocean at times. For reasons unknown, they don’t exist in the far southwest or on the west coast despite some areas providing prime habitat. They are a slow-growing fish that can be as old as the angler, with studies showing some specimens of 40cm to be up to 30 years old. With this in mind, it pays to keep only what you need for a feed. Some people may disagree, but I think there are much better tasting fish out there! Generally speaking however, silvery fish from saltier regions can have tastier flesh than say, bronze- coloured fish from brackish water.

Cracking specimens can weigh over 2kg and measure 50cm to the fork of their tail, though yarns from yesteryear speak of fish well over 3kg and 60cm! Probably the most intriguing bream locations in Tasmania would include the Tamar River, Mersey River and Port Sorell, where fish seem to enter in the warmer months and retreat in the cooler months leaving behind a very small population of resident fish. These particular fish appear to be migratory, perhaps even hanging out amongst coastal reef systems. It is these silvery sea-going bream that regularly push that magical 50cm mark and haunt the dreams of every bream angler! 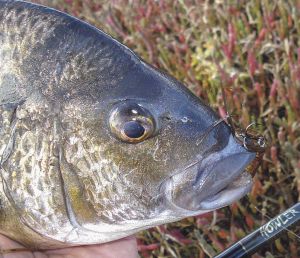 Probably the most exciting way to catch bream is using cast and retrieve methods with spin gear, or even fly gear if you’re that way inclined! Sure, you can sit there and soak a crab, pink nipper, pretty-fish, sandworm, mussel or prawn for bream but with modern gear, imitative lures and a range of diverse locations; covering hundreds of metres of water by boat or from the shore is far more entertaining for the active fisher.

Although bream can be targeted year-round in many systems, things start to fire up from around October through to April. During October and November, bream are often schooling up and gradually making their way upstream to spawn in great numbers. They can be targeted during this journey and indeed while they are spawning, with different factors attributing to your level of success. In addition, the spawning run coincides with a whitebait run in some systems, giving you the chance of landing a sea-run trout too. I’ve had sessions on the Derwent River, for example, where I’ve hooked a bream from a cluster of rocks and while I’m fighting this fish, my companion casts in exactly the same spot and nails a trout – Double hook-up, trout and bream style! There are not too many locations around Australia where that can happen. 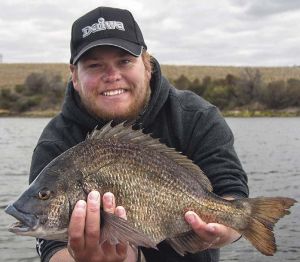 Sometimes, locating bream in larger systems can be half of the challenge. A great way to start is searching deeper holes that contain tidal flow using soft plastics, deep diving or sinking hard body lures. If you have a sounder on your boat, on occasions fish will be so thick that they will appear as a school on your screen. Scented soft plastics, vibrating lures, blades and crab style patterns are great patterns to entice these fish to bite. As we move closer to November and December, fish will often go on school holidays and can be found frolicking amongst snags or tussocks in the upper reaches where they pose a real challenge.

There is no greater feeling than sighting a fish over shallow water. Bream will often move out over flats to feed as the tide comes in and believe me, watching a bream hone in on your lure, pause several times to then eventually crunch your offering, takes some beating! If a high tide occurs at first light or late in the evening, you can see bream in the shallows with their tails sticking out of the water, furiously digging away in the sand or crunching shells with their mighty jaws. Shallow running hardbodies or lightly weighted soft plastics work very well here, with the hard body lure being my favourite. Fish smash these with gusto; often hooking themselves in the process. Bear in mind however, that pausing your lure is crucial to success with these challenging fish.

Like the famous singer Prince once said; “Bream, get on top” (I think he did anyway, I wasn’t really listening). Once you have the bream bug, an obvious progression is to delve into surface lures or poppers. My word, you thought ordinary hardbodies were fun? This stuff is off the charts! Bream can be an extremely finicky fish but when they are in the mood, they will hunt down a surface lure out of aggression alone. A general tip is to work your lure in a ‘walk-the-dog’ style, pausing regularly and for periods up to ten seconds. If a fish boils behind your lure, pause, give a little tweak and pause again. They can be difficult to hook sometimes but keep persisting until you convert that boil into an almighty ‘sluuuuurpp’! Bream will often sit right under your lure with their mouth against the trebles, deciding on whether to commit or not, when all of a sudden, they open up and suck – it’s pretty amazing to watch! Using surface lures is most productive when there’s a slight roll on the water and when it’s cloudy or overcast. 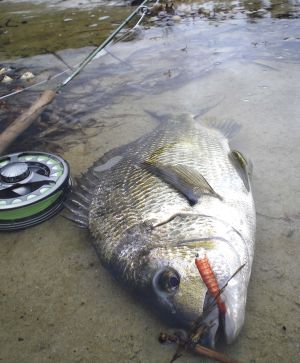 Once again, natural progression and subsequent obsession occurs. If you fish for bream and you also fly fish, then chances are that you want to chase bream on fly. If you don’t, then you should! I’ve had some great success over the past couple of years using home-tied popper flies in various shapes, sizes and colours. These are used in exactly the same fashion as mentioned above but the biggest challenge here, is getting your fly out there without spooking fish. I will only touch on it here but needless to say, for me, this is the most challenging way to catch a bream but by far the most rewarding!

Black bream are an amazing estuary species and due to the cessation of netting in many of our estuaries over the past decade or so, they are quite abundant. You don’t need top-of-the-range gear to chase these fish, just a lightweight spinning outfit of 2-4kg, a 1500-2500 sized reel loaded with 3-6lb braid and some fluorocarbon leader material between 3-6lb. The sunnier and calmer the conditions, the longer and lighter the leader – sometimes up to several metres. Polarised sunglasses are almost imperative for any fishing these days but for bream fishing they are an amazing asset. The sun can begin to have quite a bite as we approach the warmer months, even more so when you’re around the water so be sure to slip, slop and slap between 10am-3pm. If you do encounter bream spawning, once again take only what you need for a feed and it’s a wise choice for the future generations to release bream that are displaying signs of eggs or milt. The more fish, the more fun!