Around the state at the moment there is a multitude of insects of every size and description from tiny midge to large grasshoppers. On a recent trip to my favourite remote western lake I noticed the abundance of craneflies. Walking in scrubby areas and brushing past the bushes would put out dozens of these insects. Most days in this area there is wind and even though craneflies are quite large they are delicate. It does not take much wind to push them onto the water and trout certainly have them on the menu.

Being inquisitive I seem to spend as much time in and around the bushes as I do fishing. On one expedition into a pencil pine grove I found the mating ritual of the crane fly going on. I have not seen so much excitement in the highlands for many years. This gave me time to have a close look at these insects. The female is quite different to the male, the most common to be seen.

There are a number of species of craneflies in Australia. The larvae can live in water but can also be found around decaying timber and damp soil. I have on odd occasions found the maggot-like larvae in trout’s stomach contents but it is the male adult that is of interest to trout

The following fly pattern is one I have used for a number of years with great success, particularly on the Great Lake sharks. The buzzer hook on this pattern is important as the bend and the point sits well away from the body making a really good hook up rate. 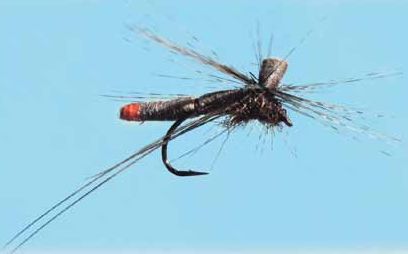 Method Take the brown tube bodiz and thread a needle through the hollow centre that is end to end. Now clamp the needle in your vice with the tail end protruding. With some burnt orange thread, make a few turns around the body a little way in from the pointed body tip, whip finish this over the turns you have made, cut thread away and place a drop of varnish over turns. Cut the very point off the end of the body giving it a blunt end. Slip body off needle. Place hook in vice and take thread back along the shank to the point where the hook starts to take a major bend.

Place the prepared body on top of hook shank, tie down firmly with 1cm of the body protruding at the rear.

Take the thread back along the hook shank and make four more turns over the body. Secure the body to the shank, make sure all this is kept back from the hook eye a little.

Tie two pheasant feather fibres in each side of the body, keeping them long. Cut excess fibres away. Dub some brown seal’s fur for the thorax. There should be some of the fat end of the body. Make sure the thorax is dubbed around this so it sits up vertical to take the parachute hackle.

Tie in the bronze coq de leon rooster saddle feather to the side of the post. Cut away excess feather stem. Carefully wind the feather around the post four times with the thread, wind this through the hackle to secure. Bring the thread down over the thorax and wind a few turns behind the eye. Whip finish and varnish.

Cut the feather tip away and shorten post to your requirement.

A cranefly has six legs, but four on this pattern are sufficient. The parachute hackle will serve as a leggy look as well as wings. This fly floats really well as the tube bodiz are hollow.

These bodies are available from Essential Fly Fisher in Launceston.