Presented from Issue 97
Rebounding stocks of Eastern Australian Salmon along the eastern coast and a revealing study into the salmon’s life history have prompted Fisheries NSW to refine the balance between conservation, sport and industry.

Research findings from an FRDC-funded project have resulted in Fisheries NSW relaxing a 10- year restriction on the commercial take of Eastern Australian Salmon along the NSW coast, north of Barrenjoey Head.

The revised management code for northern NSW replaced a daily bycatch limit of 100 kilograms and permits allowing fishers to retain Eastern Australian Salmon as bait, with a 224-tonne-a-year commercial fishery as of 1 December 2011.

The species (Arripis trutta) is harvested commercially primarily for use as trap bait to catch more lucrative species, such as snapper, crabs and rocklobster, off the eastern coast of Australia.

So dominant is this end use that fishers’ bait requirements were used to determine the 224-tonne catch limit in northern NSW. The species is also highly sought after by recreational fishers for its strength and fighting spirit, and although perfectly edible, is not considered a premium table fish.

Commercial fishers currently harvest about 2000 tonnes of Eastern Australian Salmon annually from Tasmania to northern NSW, where the species is found.

The original restriction was introduced in 2001 when Eastern Australian Salmon was declared a recreational-only species north of Barrenjoey Head, forcing trap fishers in the north to truck bait in from southern NSW. Over the years the restriction became increasingly unpopular and contentious as salmon numbers appeared to be increasing.

“Eastern Australian Salmon are a highly visible species: they are big fish that swim in large schools, which feed heavily on baitfish near the surface,” says NSW Fisheries researcher John Stewart, who headed the FRDC study.

“That meant fishers noticed that stocks seemed to be increasing in abundance and migrating further north, right up into southern Queensland, which historically is unusual.”

Over three years to 2011, John Stewart led a collaborative, cross-jurisdictional team of researchers from NSW, Victoria and Tasmania. The aim was to provide robust data to support science- based management decisions.

This included information about age, spawning activity, stock structure and stomach contents obtained when the team dissected 5000 fish, mainly donated by fishers along the eastern coast.

One finding likely to influence ongoing management practices relates to the geographical distribution of the fish as they mature.

The study found juveniles mainly in Tasmanian waters. Only after a few years do maturing fish migrate northward. Ultimately, the oldest and biggest spawning fish are located off northern NSW. Their eggs and larvae are then carried southward, to southern NSW, Victoria and Tasmania by the East Australian Current (EAC).

“We are very confident with these results,” John Stewart says. “It was a comprehensive study looking at fish across their distribution and included biological studies. We saw no fish at all mature in Tasmania. It is not until they move north that they undergo sexual maturity.” The oldest fish surveyed – aged by counting rings in the otolith (ear-bone) in the same manner as tree rings are counted – was 12 years old.

“This fascinating life history and distribution could explain why stock levels have rebounded in the past decade,” John Stewart says. “During the 1990s there was a reduction in the amount of Eastern Australian Salmon harvested in Tasmania, driven by reduced demand for rocklobster bait. In turn, that could have allowed more juveniles to migrate northward.”

Diet also was found to change as the fish matured. Young fish were found to feed on small crustaceans and fish. As they matured, their diet centred primarily on species considered bait fish.

“One of the drivers for the research were concerns – primarily from the recreational sector – that large schools of Eastern Australian Salmon were eating vast quantities of juvenile seafood species important to recreational fishers – baby whiting, bream, and Mulloway,” John Stewart says.

“That is something else we examined.

“Upon checking the stomach contents of 5000 fish, we found mainly bait fish – sardines, anchovies and Whitebait. We did find the odd juvenile seafood species, but they were a small fraction of their diet.” Another important study component, especially from the FRDC’s perspective, looked at stock structure. This was to determine whether salmon on the east coast behave as a single population that mixes and breeds freely or whether they form separate sub-populations.

Two methods were used to obtain an answer. One involved reanalysing tagging data collected since the 1960s using the new biological understanding of the species. The other involved advanced chemical composition studies of the otolith bone, which provided information about the water chemistry of a fish’s habitat and, therefore, whether different fish mixed or stayed isolated.

“It’s a nice outcome when conservation and the interests of recreational and commercial fishers balances,” John Stewart says. “Plus, now there is better information about the life history of the animal available to all stakeholders. That means we can get the balance right between the need for the spawning adults in the northern reaches and the developing juveniles in the south as we refine recommendations into the future.”

That sentiment is shared by John Harrison of the Professional Fisherman’s Association. He says the findings demonstrate that marine resource can be sustainably shared by everybody, including commercial interests.

“This is a sensible decision based upon science and nothing less,” John Harrison says. “Ongoing monitoring will take place to ensure that catch limits are fair, equitable and sustainable, with a review triggered when the commercial catch reaches 80 per cent of the 224-tonne limit.”

He thinks that is unlikely to happen soon given the decreased demand in southern NSW following the closure of a fish-processing factory.

“With about 300 to 400 tonnes less salmon caught in the state, it is unlikely that we will see an overall increase in salmon catches, despite the lifting of restrictions on commercial fishers.”

Overall, he applauds NSW Fisheries for the decision. “We also no longer have the bizarre situation of fish swimming past home ports of fishers who are unable to catch the fish for bait use.”

The study was co-funded by the NSW Recreational Fishing Trust. This article has been reproduced with kind premission from FISH - The Fisheries Research Development Corporation magazine and the author Gia Braidotti. 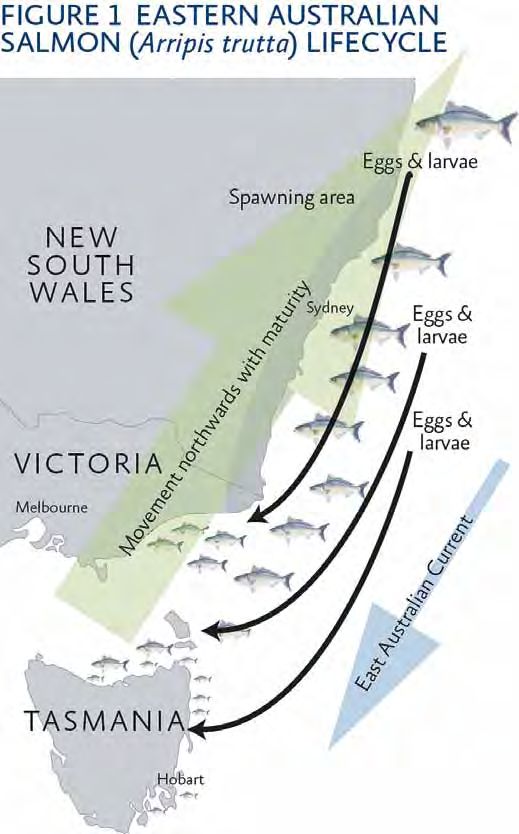