Even though I was a little stiff and sore from the short spin session yesterday, as the morning went on the better I felt so a late start was had in a small tannin stream. In what was pretty good weather it was 11:50am when I finally hopped in the stream, the water level was good and the water itself was a nice medium tannin colour, just ideal for trout fishing. I started the spin session off with the same trout gear as I used yesterday which was the Okuma Celilo Finesse ULS 1-3kg trout rod, Okuma ITX-1000 spinning reel & the Mepps #0 March Brown Bug inline spinner and of course the reel was spooled with the ever reliable ultra strong Platypus Pulse 4lb Mono line. The first few casts and retrieves, not a lot happened until I lobbed the spinner close to the right hand river bank, on the retrieve a dark object appeared behind the lure and followed it for a short distance before it turned and moved off not to be seen again.

That dark object was a large trout, a size that is rarely seen in such a small stream as this, fish of that size a very few and far between. Yesterday the trout went for the March Brown Bug spinner late in the afternoon in similar weather conditions, then sun was much lower too. Today, I'm in the river three hours earlier and the sun was on the water surface, a change of lure was in order. It was a pretty easy choice of what lure would replace the March Brown, it was the Stone Fly Bug that went on on the small snap swivel. I felt that the black colour of the Stone Fly spinner was better suited to the brighter conditions for now, if it didn't attract a trout then I'll make another change.

I had only just made the lure change when I noticed a trout broke the surface near the left river bank a little further upstream. It was in easy casting distance but impossible to get to from where I was in the river due to a couple of overhanging trees that blocked any chance of casting the spinner to where I spotted the trout. All I could do was slowly make my way upstream and tread as lightly as possible on the gravelly river bottom so as not to spook the trout. It only took a few minutes before I was in enough open water where I could make a cast into the area where I had seen the trout rise.

All I was hoping for was that the trout was still in the area and hopefully I had made the right choice going with the Stone Fly Bug spinner. Seeing as I was standing half a meter off the left river bank I made sure the first cast was parallel to the side of the river where I was standing. I lobbed the lure close on sixty centimetres off the river bank, as I retrieved the spinner a bow wave appeared out of nowhere, a trout came hard and fast at the lure and in no time at all it was fish on. It was a nice solid fish too, one that fought hard and made several leaps from the river before it tired and I eased it into the net. This was just the start I was hoping for, a trout caught in the first ten minutes was a good start and with a decent 410 gram trout too, even better was my choice of lure worked. After a couple of photos the trout was released back into the stream for me to catch another day.

The water ahead of me had a few reeds close to the river bank on the right hand side as well as a small bubble line on the surface that was just over a meter from the river bank. To me it was a good run of water that could have a trout in it and I didn't have to move from where I had just released the trout I had just caught. There was a large tree next to the river that was close to the reeds and the water was swirling around it, that's the area I cast the lure into. I was only half way into retrieving the lure when it was taken by another trout, this fish felt bigger that the previous one I had just released. It pulled hard and stayed deep, then it made a run towards me, that's when I saw the size of it, it was a big fish for such a small stream. It made a dash down past me on my left side before it turned and came back past me and headed back across the narrow stream.

At one stage it turned me around in a half circle when it ran from one side of the stream to the other, the Okuma ULS 1-3kg rod was well bent over, the little Okuma ITX-1000 reel was holding well as was the thin 4lb Platypus Pulse mono line, this trout wasn't going anywhere but in my landing net. What seemed like a couple of minutes I finally had it in close enough to slip the net under it, no sooner was it in the net it gave an almighty roll and shot out of the net and back into the water. When that happened my heart was in my mouth as I thought it may toss the lure, thankfully it didn't and I managed to ease it back into the landing net. How it never tossed the lure in the way it played merry hell in the water, then leaping from the net and still stayed hooked amazes me. Once it settled down in the net I attached my scales to the net and weighed it, then deducted the 310 gram net weight which left the trout at a solid 785 grams. It's nowhere near my biggest trout that I've caught in a stream/river at all, but it was one of the best I have caught in this small stream by at least 200 grams.

When I was taking a photograph of the fish while it was in the net I noticed it had a large indent right behind the dorsal fin which was strange. It didn't affect the way it fought for its freedom at all and like all the trout I've caught, it was released hopefully for another day. Once I was over the adrenalin rush of catching that trout I moved on and made my way upstream and continued flicking the Stone Fly bug around in some nice looking water but the trout were few and far between. I did hook and lose a couple of browns before I went on to catch a trout every twenty five minutes before they completely shut down once I caught and released my fifth trout. I tried several different inline spinners and hooked and lost a couple of small trout, it wasn't until I gave a #00 White Miller Bug spinner a go when I hooked the smallest trout of the session.

After it's release I didn't see another trout until I was about to get out of the water an hour later, that's when I caught the seventh trout of the spin session, it was caught on a March Brown Bug spinner. My day was done, the trout had more or less shut down once the North Easterly breeze arrived, not only that my body was getting a little sore so it wasn't worth continuing on any further. I was still happy with how the session went today with some nice trout caught and released with one of them being a PB for me in this small stream. I'll rest up tomorrow and depending on the weather I'll be ready for another session in a day or two. ** Equipment used: Okuma Celilo Finesse ULS 1-3kg trout rod, Okuma ITX-1000 spinning reel, Mepps inline spinners, Platypus Pulse Mono premium monofilament line, Platypus Stealth FC lead line & Boomerang Tool Products. 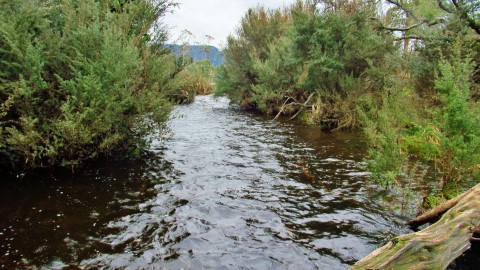 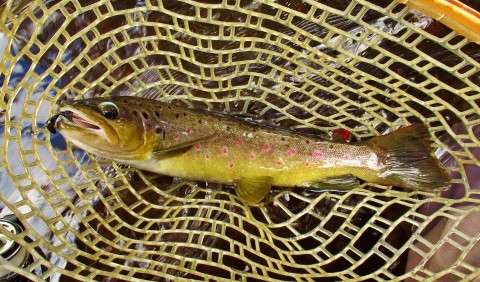 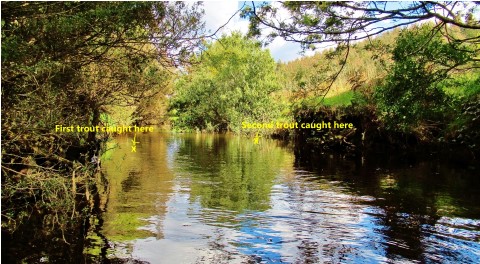 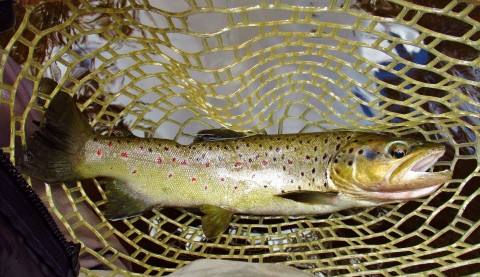 The fish of the day checkout the indent on its back 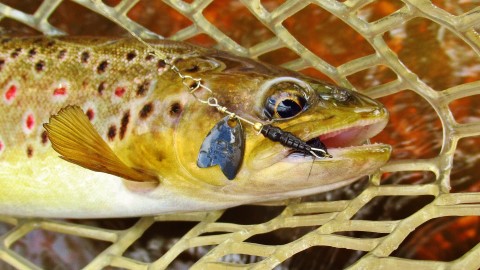 The Stone Fly Bug did the job on this trout 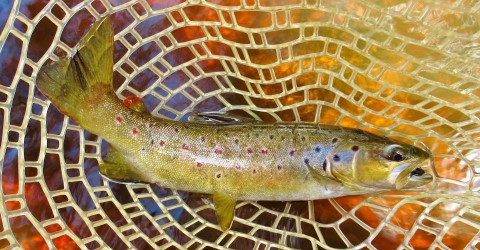 This fish smashed the Bug spinner