500th trout of the season

Seeing as I only need another three trout to reach the 500 trout target I set myself for this season I decided not to wait another day to reach it. With rain forecast for all of tomorrow I made the decision to head off to my favourite tannin water to see if I could get it over and done with. It was 3:05 pm by the time I hit the river which was a little on the low side but still deep enough thanks to the 6 mms of rain we had yesterday. I started the session off using a small copper #00 Aglia inline spinner thinking that the copper colour would stand out better in the dark water.

It wasn't all that long when I decided that the White Miller Bug spinner would more than likely be a better choice, so on went the White Miller. Not long after the changeover I had the first trout hooked, played and in the net, a nice small/medium size trout, it was just the start I was hoping for. The next ten were pretty quiet without a sign of a trout, it wasn't until I reached one of the rare wide deep stretches of water on the little stream when I caught my second trout of the afternoon. I had made several casts and retrieves in that water and was about to move onto the next piece of water when I decided to have one more cast.

Thankfully, that was a good decision, the cast was a long one to the top end of the stream, on the retrieve I felt a light bump on the spinner so I gave the rod a light twitch, that was enough to get the trout to take the spinner. It was a beautifully coloured brown trout that had taken the White Miller and it was a solid fish at that. It wasn't all that long before I had it in the net, once in the net I weighed it then deducted the net weight, the trout weight was 485 grams which was a good size fish for such a small stream. With only one more trout required to reach my season's set target I was feeling quite confident of having it in the landing net sooner than later and it was. Ten minutes later while fishing a small deep pocket of water that was well covered with overhanging Tea Trees I picked up the third trout of the spin session, trout number 500 for the season has been caught.

As much as I would have liked that trout to have been larger than it was, in the end it doesn't really mean all that much, a fish is a fish and size doesn't matter as they all add up at the end of the day. Once released I was about to call it a day, then knowing I only needed two more trout to pass last season's total catch of 502 fish I decided to fish on a little longer. It actually took me a lot longer than I thought it would to catch the next trout, in fact it took me an hour before I finally had the fourth trout of the day in the net. That fish was a beautiful well conditioned brown trout too and not much smaller than the 485 gram trout caught earlier. With just one decent stretch of water ahead of me before I was nearing where I had parked the car I was hoping that water would do the right thing and give up the trout I wanted.

As I approached that open stretch of water I spotted a small trout jump from the water, so I knew there was at least one trout there. Standing at the tail end of that long stretch of water I thought it's now or never, I have to catch a fish here, if not I'm heading to the car as I didn't feel like continuing on any further. I have caught trout in this stretch of water several times before calling it a day and I was hoping to do the same again today. I made a long cast to the top end of that stretch of water, on the retrieve nothing happened over the first five meters of water and just when I thought I'd be having a few more casts and retrieves a trout took the lure. It was fish on, now all I wanted was that the trout didn't leap from the river and toss the spinner, it did make two leaps from the water and the lure held firm, the trout made it into the landing net, My day was done, I had achieved what I set out to do, caught my 500th trout and passed last season's total of 501 trout. With eleven days of the trout season left, every fish I catch from now on is a bonus. 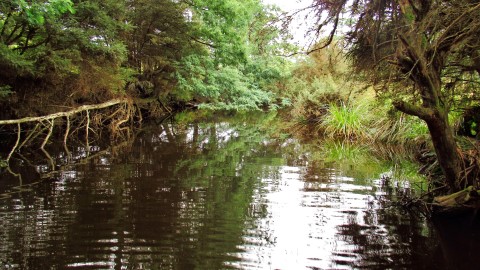 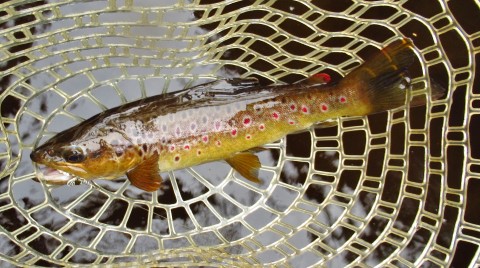 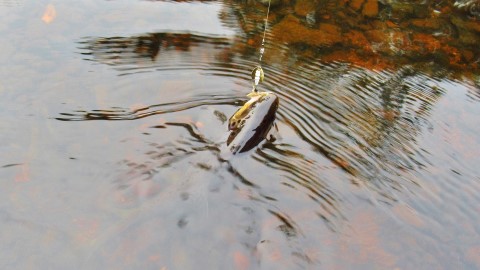 Every trout was caught on the White Miller Bug spinner 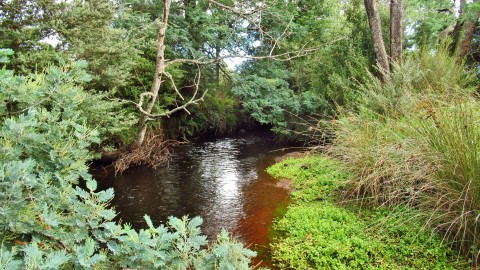 No room for a poor cast here 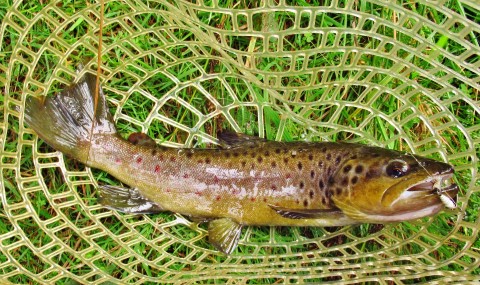 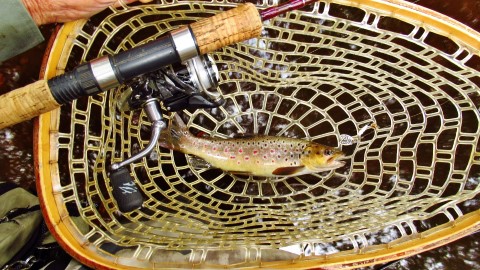