Today is another day and with more rain forecast later in the day I headed back to my favourite tannin stream to hopefully catch five trout to reach another achievement with my trout fishing. The weather this morning was quite good, very humid and no wind, the water level was down to an ideal wading and fishing height too. I was also hyped up and raring to catch the trout, whether it be the five I need or even better ten or more would be great. Once in the stream I started casting the little #00 White Miller Bug spinner directly upstream into a nice bubble line, then retrieved it while giving the lure a light twitch every so often.

Nothing happened during the first five minutes so I changed over to a #00 gold Aglia Mouche Noire to see if that may attract a trout. it wasn't all that long before I had a trout take it, after a short tussle with the small trout it tossed the spinner. While fishing the next stretch of water the same thing happened again, another hooked and lost trout was had. I went for a change of lure again, this time it was a #00 gold Aglia with a few additions that I added to it, such as a Mepps black fury sticker on the spinner blade and a small piece of red plastic tube onto the shaft of the treble hook. A few casts and retrieves and it was fish on once more, same thing happened, the trout tossed the spinner making it three trout hooked and lost in a row. This wasn't making me feel all that calm either, in fact my blood was boiling, a lure change was made once more. In my small lure box I had a very old (40yrs at least) small unbranded blade spinner, one that I painted the spinner blade with light brown paint then added a few yellow dots on the blade to finish it off. It was on the third cast and retrieve in a wide slow flowing stretch of water when the hand painted spinner was taken by a medium size trout, this was a nice fish too and one that I thought was well hooked. It wasn't until I nearly had the fish within reach of the landing net when it tossed the spinner, with four trout hooked and lost in a row that I was really feeling the pressure now. I knew the law of averages that I will have one in the net at some stage of this spin session, I'm just hoping it's sooner than later.

I have tried a variety of spinners of which most have hooked trout, I just need to be patient and stay with the one spinner that I feel will do the job. What I did was go with a plain #00 gold Aglia spinner, after not seeing a fish for at least one hundred meters I was starting to think I may have to go for another change of lure. As I approached a wide waist deep stretch of slow flowing water I decided to stay with the gold Aglia a little longer. The fist cast was to the right hand side of the stream, on the retrieve a bow wave appeared behind the spinner and I thought this is it. Nothing happened, even the light twitching of the rod didn't entice the trout to take the lure. My next cast was into a small shaded area on the left hand side of the river, on the retrieve a trout moved up behind the spinner and stayed hard up behind it. I said to myself, surely this trout has to take the lure, it wasn't until the lure was within a couple of meters from me when it suddenly darted at the spinner and took hold of it, it was fish on.

All I wanted was for it to stay on until I could slip the net under it, after it had made a couple of solid runs & several leaps from the river it tired and I eased it into the net. You wouldn't believe how relieved I was to see that medium size brown trout in the landing net, now all I need is to catch another four trout and my day will be done. It had taken seventy five minutes fishing this little stream to catch the first trout of the morning, something that doesn't happen all that often when I'm in a river chasing trout. As I made my way upstream I was feeling a lot more confident of reaching my target of five trout for today's spin session, over the following thirty minutes I went on to catch another three small trout in a row. As I was recording the forth trout I happened to say that this is the forth trout in a row, I then said “I shouldn't have said that” and I shouldn't have, because three minutes later I hooked and lost the next trout. I continued to fish my way upstream and barely saw any trout, I was starting to get worried that after losing six trout I may not get the fifth one that I wanted so badly. I decided to get out of the stream and head to a stretch of water that I have always caught a trout in, it's my most reliable small run of water in this stream. It was just on 10:58 am am when I entered my favourite piece of trout water and had my first cast in it. No sooner had I started to retrieve the little gold Aglia when it was smashed by a trout, this trout stayed deep and pulled hard and I took my time by letting it do it's thing as I knew it would soon tire, it did tire and I slipped the net under it. You have no idea how relieved I felt to finally have the fifth trout of the spin session in the net, this fish was my 11,000th Tasmanian trout since we moved to Tasmania back in March 2000.

It's amazing when one is close to achieving a milestone how tough it gets the closer one gets to it. Like today, it was as tough as it gets, losing five trout in a row really put me under pressure. By staying patient and knowing it was only a matter of time before I would get there today paid off. After the release of the fifth trout, my next cast and retrieve in that same stretch of water resulted in the trout of the day being caught and released and that's when I called it a day. That last trout was a beautifully well conditioned brown that tipped the scales at 435 grams, it like all my fish was returned to the stream for another day.

** PS: My 10,000th Tasmanian trout was caught back on the 3rd of November 2019. Another thing I picked up on was a trout season for fishing rivers here in Tasmania is only nine months, from August through to the end of April the following year. Seeing as I only started trout fishing rivers here in March 2000 I have missed over 5 years of river fishing for trout and possibly another 2,500 trout seeing as I average 500 trout per season.. Food for thought?? 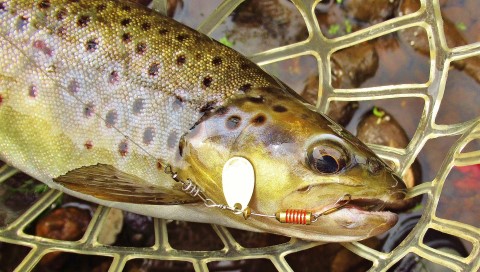 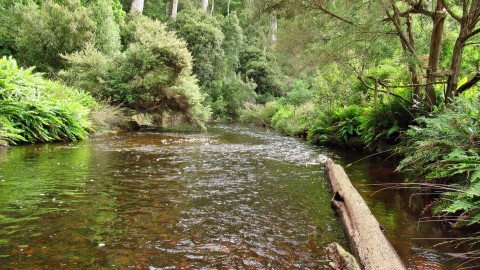 Cant beat the scenery in a small tannin stream 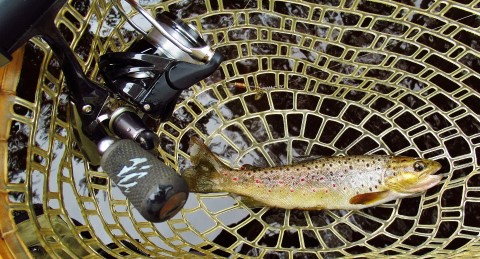 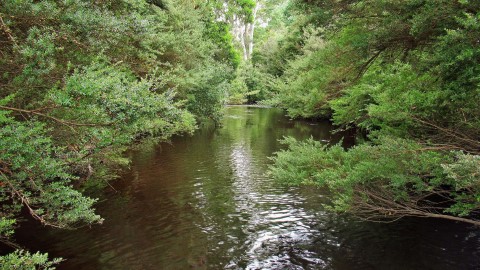 No margin for error casting a Mepps here 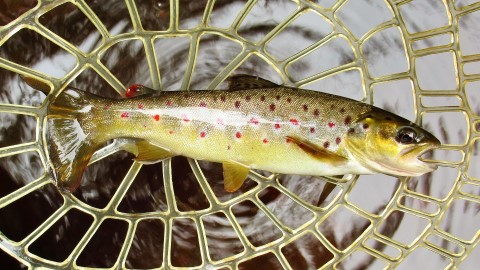 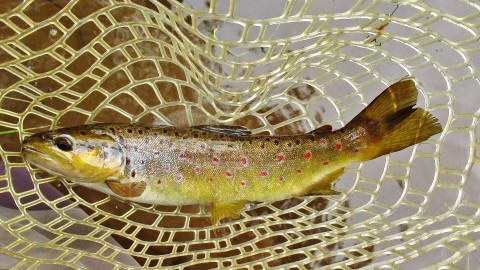