Today's mid afternoon trip was to one of my favourite tannin streams and my aim was to catch four trout to reach my 300th of the season. The conditions weren't all that good with an Easterly breeze, warm day with plenty of sun and a higher than normal water level. The one thing I disliked about today was that it's a good day for snakes, I had to walk through a lot of high grass and fallen tree branches to reach my entry point into the tannin water. It was 2:55 pm by the time I hit the water and started to flick a small #00 gold Aglia spinner into a small section of dark tannin water where I had a trout follow the lure on the first cast and retrieve. It was on the second cast and retrieve when a small brown trout took a liking to the gold Aglia, the first trout of the session was soon in hand. Even though it was a small brown trout this was just the start I was looking for, I was hoping it will continue to keep on going too.

A little further upstream I hooked another small brown, that little fish tossed the spinner on its first leap from the stream. From here on there was hardly a fish to be had, in fact all I had was a couple of soft hits & misses. It wasn't until I changed to a copper bladed #00 Aglia spinner when I picked up my second trout, this one was a nice plump medium size fish, one that was in top condition too. A little further up the stream after flicking the copper Aglia into a small flat water close to the left side of the river I caught another trout, it was a little larger than the first trout caught early on. With only one more trout needed to reach the three hundred mark I was getting a little edgy, even more so when I hooked and lost a nice trout in a fast flowing stretch of water. Just ahead of where I lost that trout was another nice piece of water on the bend of the stream, this water has given up a trout on previous trips here.

My fist cast was a little astray, the second cast landed right where I wanted it, as soon as I started to retrieve the spinner a solid brown came out of nowhere and took the lure. This fish did everything it could to toss the copper Aglia and at one stage I thought it would, thankfully it didn't and I soon had it in the net. “You beautiful little fat thing” was the first thing that came out of my mouth once it was in the net, the three hundredth trout of the season was landed, I was pretty relieved it was over too. It was nice that the trout was a solid fish too, it's always nice to reach a season milestone with a reasonably good size trout, it weighed 415 grams. After it's release I went on to catch one more trout, that fish was only a small one like the others caught early on. With the trout being so few and far between and seeing as I did what I set out to do I called it a day at 4:27 pm. Besides, it was very hot and humid which didn't help either

** PS: I have another record to achieve this season too, that one isn't all that far off either, maybe one or two more trips will do it. When It happens, I will be very happy and relieved as well because it's something I never thought I would achieve in my twenty two years of trout fishing in the rivers here in Tasmania. Hopefully that story won't be all that far away either. 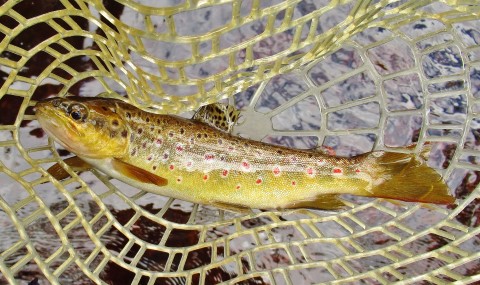 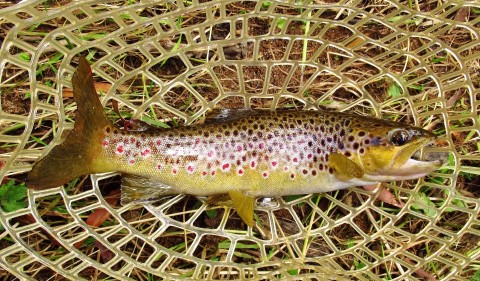 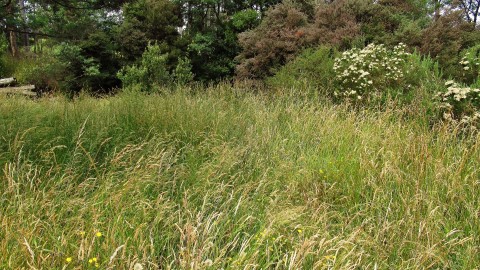 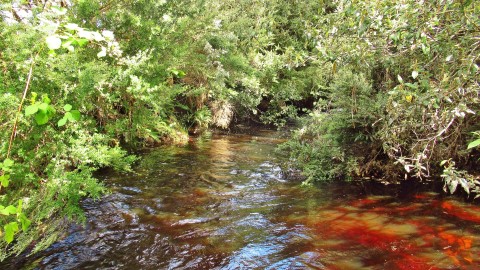 No margin for error when casting a Mepps lure here 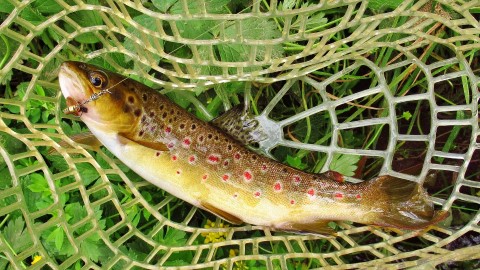 One of only five trout caught today