With another storm forecast later in the day I headed up to a small stream on private property for a quick spin session before the weather turned sour. It was quite humid when I left home and on my arrival I noticed quite a few heavy clouds building up so I had to hurry on and get in the small river. The water level was still good here and there was still plenty of flow, it was a nice medium tannin colour as well so I started off using a small Mepps #00 gold Aglia. The first cast and retrieve resulted in a small brown having a go at the spinner, it missed getting hooked. The second cast and retrieve was much better when another small brown had a go at it and was hooked, the first trout of the session was landed. I moved several feet forward and flicked the spinner into the top end of this narrow stretch of water, no sooner had I started to retrieve the spinner when another little brown snapped it up, trout number two was soon in hand. Another cast & retrieve back into the same area I had a hit and miss from a trout, like the others, it was a small fish.

A little further up the river I had another small brown have a go at the spinner, it wasn't as aggressive as the previous trout and I felt this was due to the sun breaking through the cloud, the river was now in full sun. With the sun on the water was enough for me to take the gold Aglia off and replace it with a #00 March Brown Bug spinner. From here on I had a couple of follows and soft hits and misses from small trout. Finally while fishing a shallow fast water run a small brown took the bug spinner, this trout was the smallest of the three caught. Even though the trout are small in this little river compared to what they used to be a few years ago, it was good to see so many of them in it. These small trout will grow into larger fish and by this time next season and the one after they will be 30cm trout, so the future of this river looks good at this stage. That was the last trout caught for around twenty five minutes when I picked up the fourth fish in a deep narrow stretch of water. Just after the release of that small trout the rain arrived, thankfully there were a couple of large Blackwood trees near the river bank, they acted as an umbrella for me until the rain moved on. It wasn't all that long before I was back in the water, the trout were few and far between from here on, I did go on to catch another three from five hits which wasn't too bad. I called it a day at 1:20 pm when I saw more dark clouds rolling my way, it was a pretty fast walk back to the car where I had time to get out of the wading gear and hop in the car when the rain arrived. Like I stated earlier, even though the trout weren't medium size fish, it was good to see so many of them in the river, and they're still fun to catch as well. 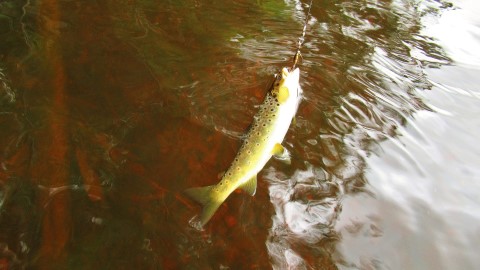 A change of lure did the job 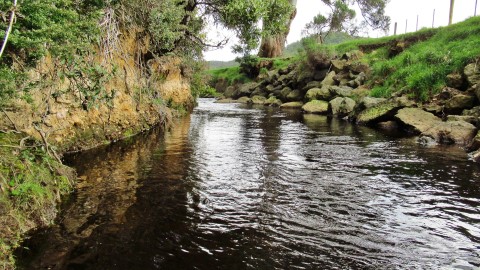 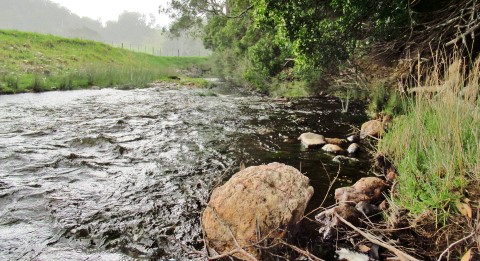 Another shower of rain coming in 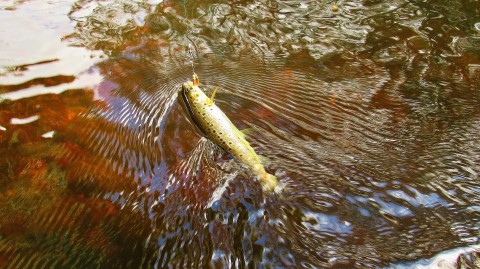 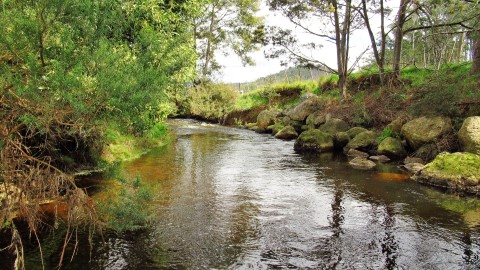 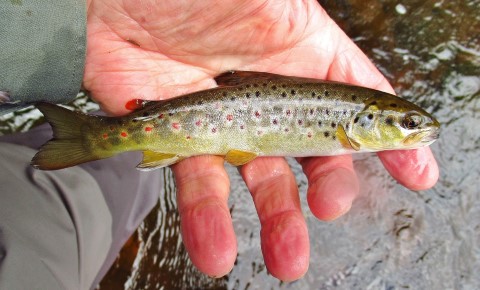 They small and aggressive 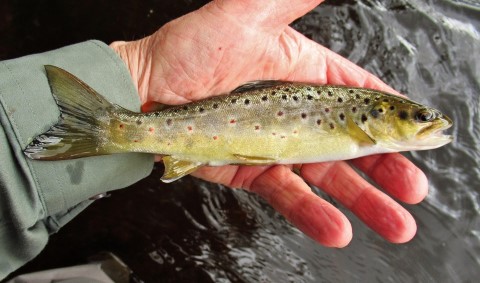 This was the biggest of the seven trout caught