With a more lousy weather forecast for later in the day I thought I would spend a few hours in the water this morning while the weather was calm. Even though it was foggy and quite cool when I left home, there wasn't any wind to contend with and that mattered most. Once I left the car and walked to my entry point at 8:45 am when I was standing on a gravelly river bank, the first thing I noticed was the water level had dropped to a nice wading level. It was down by at least five inches from my last trip here which meant the trout would be in more open slower flowing runs now. I started the session off using a #00 gold Aglia Mouche Noire, I felt it would be a good lure for the dull conditions & lower water today. While I was at the river edge I decided I would cross over and head further downstream to fish a stretch of water that I have fished for a couple of seasons, one that did give up a few fish back in it's day. Before I crossed over I looked at a nice flat water that had a large submerged log in it, to me it looked fishy and worth a few casts to see if I was right.

No sooner had I lobbed the lure near the submerged log with little Mouche Noire I felt the weight of a trout on the lure, a trout mouthed it, not a strike, just mouthed the treble hook. I slowly raised the rod and set the treble hook of the spinner, it was fish on. I couldn't believe how fast it happened, I was stoked to have a hook up on the first cast of the session. That trout made several runs towards the submerged log, I kept the pressure on enough to keep it out of there, it turned and headed back into the mainstream where I took full control of it. It made a few more runs and leaps before tiring and I eased it onto the sandy river bank. It was a solid (410 gms) well conditioned, beautifully coloured trout, like all my trout it was released for another day. Catching a trout on the first cast and retrieve is something that rarely happens all that often and when it does, it can go two ways, either you have a good day on them or one with just a couple caught for the day. Myself, I really felt that with the lower water level it was going to be one that will see quite a few trout make it into the landing net.

After crossing the river I decided not to go all the way to where I had originally intended to start from, I thought I would leave it for another day. After a little bit of bush bashing I finished up hopping in the water around one hundred meters downstream from where I crossed over. The water looked good too, I thought it would give up a few trout as I worked my way upstream, it only gave up one medium size brown, that fish like the last one only mouthed the treble hook, it was taken by raising the rod tip to set the hook. I have no idea why there wasn't any aggression taken by the two trout caught so far, it may be due to the water temperature still being low. I managed to break the treble hook hook with my forceps when removing it from the trout, I didn't damage the trout in any way either. I replaced the little gold Aglia Mouche Noire with its cousin the gold Aglia Mouche Rouge, the difference between the two is the Noire has a black & red tag treble whereas the Rouge has a brown & red tag treble. Having caught two trout from two hook ups now I was quite happy with how the spin session was going at this stage.

Once back at the area I first crossed over I started to slowly make my way upstream in knee deep medium flowing tannin water. I concentrated on retrieving the lure down the bubble line that was to the right side of the river, it also had a nice flat water along that side as well. After several casts and retrieves a small brown took the spinner, this time it was an aggressive attack on the lure which was more to my liking. As I continued to fish my way upstream I picked up two more browns in ten minutes, before I knew I had five trout on my tally sheet, making it my best catch for this season. After the release of the fifth trout the fishing went quiet for a short time before it was fish on again and I had reached the half a dozen mark, now I wanted to reach the double figure mark before calling it a day. With plenty of nice water ahead of me I knew I had a good chance of reaching it too. A little further up the stream I hooked and lost a small trout, a few minutes on I had my seventh trout in the net. Like all the trout caught so far it was taken next to the bubble line, it was also an aggressive attack on the spinner too. Every trout caught so far have been in excellent condition, all nice pump fish and this includes the smaller browns as well. It was 11:45 am when I caught my seventh trout of the session and my back was starting to tighten up on me, it was really time for me to call it a day but I still wanted to reach the double figure catch first. So I fished on, it was a good decision, even though I was in pain I did catch three more trout in twenty minutes and reached my set target, I called it a day and started to head back to the car. On the walk back to the car I decided to give one more stretch of water a go, big mistake that was. As I made my way up in waist deep water I tripped on a submerged log,

Yep!! I took the plunge in the drink, and drowned another camera (my third now) too.. Thankfully my brain was engaged and I pulled it from the inside of my waders in quick time, it was wet and went a little haywire when I turned it on. I rushed back to the car and dried it off with the car heater, it's back in good working order again.. Not only that, while heading back to the car I took the camera battery & memory card out to dry them off. After walking some 40 yards or so I couldn't find the memory card, I had dropped it somewhere. I back tracked and was lucky enough to spot it in the grass.. Was it luck or pure arse that I found it, I didn't really care, all that mattered was I found it, plus it had all of the mornings spin session on it as well as 2,600 other photos. It was still a top few hours spent chasing trout anyway even with the little mishap.

another brown bites the dust 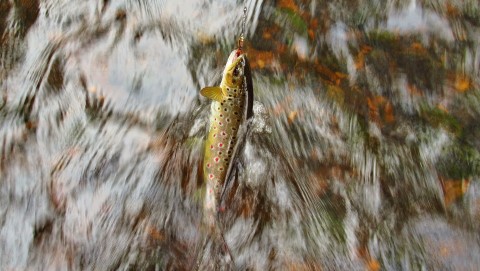 another trout ready for release 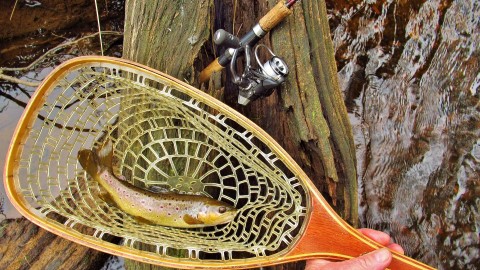 its been two seasons since I fished here 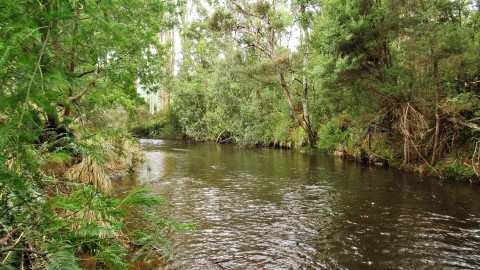 number ten for the session 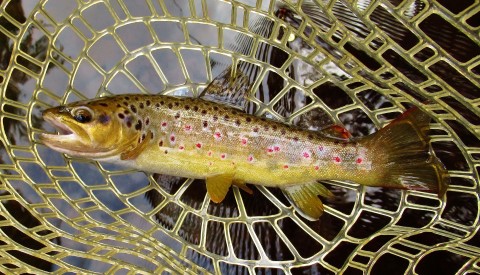 the fish of the day 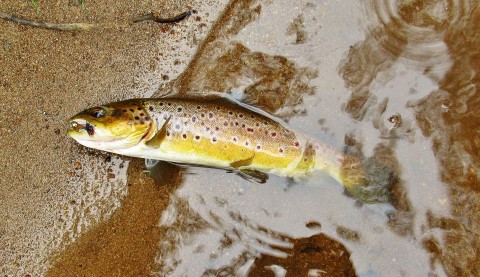 this beautiful brown is ready for release 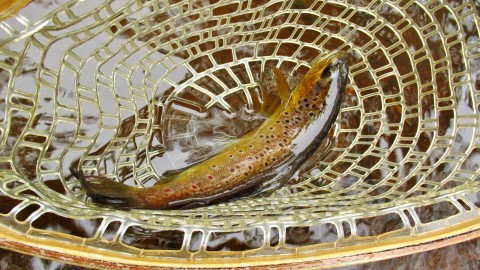