300th trout of the season

Needing only ten more trout to reach my 300th trout for the 2020/21 trout season and with the larger rivers still running high after 47mms of rain three days ago I had no option but to head back to my favourite tannin waters. The weather was fine, no wind to worry about plus I had an earlier start to the day than I normally do, I was in the water by 8:20 am. At this time of the year the sun rises much later than last month and lower in the sky in the morning to what it was last month. Not that it mattered all that much as the area I'm fishing has a lot of dense foliage on both sides of the stream.

The water level was much higher than I expected, it was at least four to five inches higher than my last trip three days ago, it hasn't dropped off as fast as I thought it would have done. It was still at a decent wading height, just running a little too fast in several areas I like to fish. It's just a matter of flicking the Mepps spinner into the small flat waters along each side of the stream where the trout will be holding out, I also fish the bubble lines (food carrying water) that the trout sit next to where they can pick up a feed. With the water being a little murky I was in two minds whether to start off using a gold blade spinner or stay with the March Brown Bug spinner, I chose the latter. There wasn't a sign of a trout in the first medium deep stretch of water I fished and I did have a little trouble seeing the March Brown spinner on the retrieve. I went for a change of lure, it was a Gold #00 Alia Mouche Noire that I went for as I felt it may stand out a little better in the murky water. It wasn't until I moved into the fast water runs and flicked the spinner into the narrow flat water next to the river banks, that's when I had my first couple of hits from a small trout. From here on most of the stream medium flowing water, knee deep and a little above the knee so I went back to the #00 March Brown Bug spinner. The first stretch of medium flowing water I moved into had a nice long flat water on the right hand side, a cast and retrieve into it, I had the first hookup of the morning. A small brown had taken a liking to the Bug spinner, this little brown stayed on and the first trout was landed. A little further upstream after a cast into a nice large flat water I had a follow from a medium size brown before it turned and moved off. Opposite that flat water on the bend of the stream was another small pocket of flat water behind a rocky outcrop next to the river bank. The water was moving fast and swirling past the rocky outcrop but that pocket of water was worth flicking the lure into. The first cast into it had to be spot on, missed cast or poor cast into it would spook any trout that's holding out in it. Before I cast into it I had a practice cast into the stream several meters ahead to make sure I got the distance spot on, the cast was good and the distance was spot on. My next cast was to the flat water behind the rocky outcrop, it was perfect, it lobbed within six inches from the river bank behind the outcrop, I couldn't have done it any better. In an instant the Bug spinner was taken and the water boiled as a solid trout hit the lure, it was fish on. The trout ran straight into the fast water and pulled hard before hitting the surface and jumping several times before it tired and I had it in the net. The next trout caught was a small brown, it was taken in a small narrow flat water that had fast water on both sides of it. I continued to keep on catching trout every ten to fifteen minutes apart right up to when I caught my ninth trout which was the best fish by far. The ninth trout was caught in a narrow waist deep stretch of medium flowing water and it took a while to land it. I had to keep it from running into several snags that were under the surface which I did manage to do before it tired and was safely in the net. After weighing in the net then deducting the net weight from the total weight that beautiful brown finished up weighing 535 grams which was a decent size trout for such a small water. I did have a total of eleven hook ups and several hits & misses too which was disappointing because I was now back (11:20 am) to where I had parked the car. The stream above where the car was hasn't fished all that well over the past few trips so I decided to fish another stretch of water a kilometre away where I'm certain to catch the tenth trout. It wasn't long before I was back in the river in the hunt for that one trout, once I caught it I'm heading for home. It took a little longer than I had expected, after having a couple of follows in the first two narrow runs it wasn't looking good. It wasn't until I moved into a wide waist deep stretch of water, one that has never let me down in catching a trout when I felt confident of heading home in a couple of minutes. This stretch of water has never let me down and it didn't today either, after a long cast into a shaded area on the right hand side of the stream, on the retrieve the March Brown hit hard and fast the tenth trout was on. After a short and nervous battle with this trout I eased it into the net, my day was done. Trout number three hundred was reached and I was on my way home feeling very satisfied in what I set out to do. 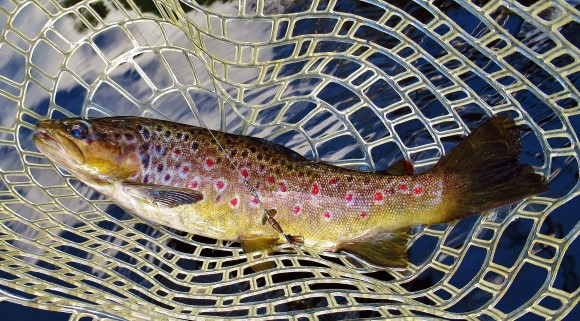 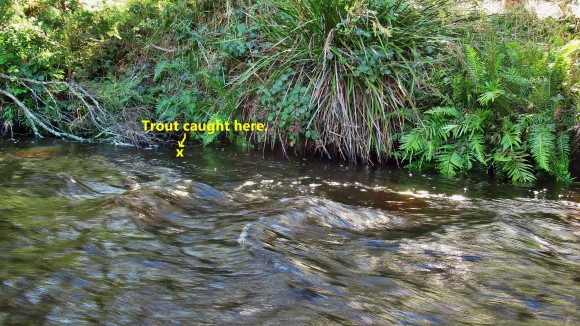 I never bypass any flatwater next to a river bank 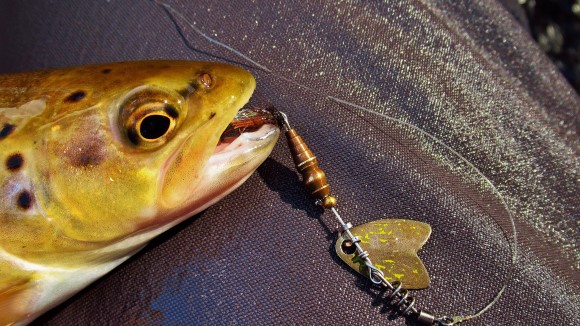 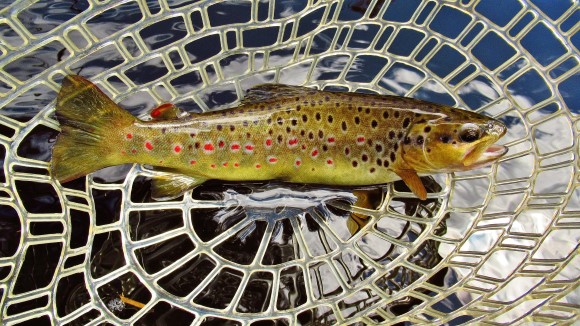 The 300th trout of season 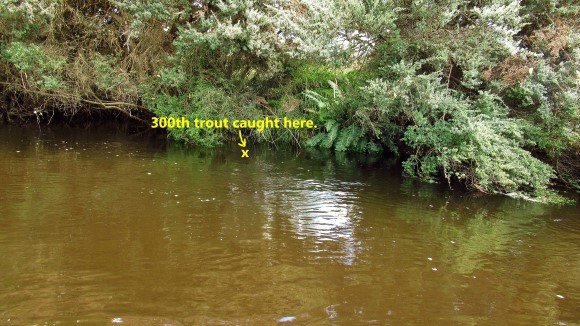 The 300th trout was caught here 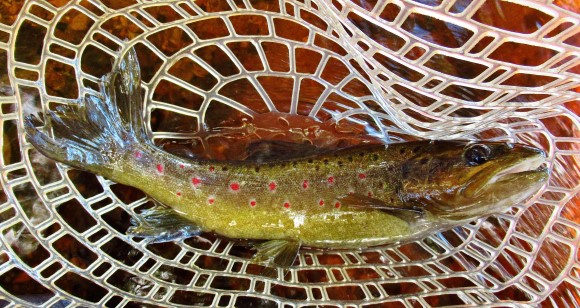 Trout of the day 535 gram beauty