Like the previous season I had a late start to this trout season which is mainly due to the body not being quite right for river/stream fishing. Towards the end of last season I was struggling more than ever with hip and lower back problems, that's the reason for only having 63 river trips over the nine month season. My average since moving to Tasmania in March 2000 is 85 trips per season. During the off season I had x-rays & scans that showed I require having hip replacements & lower back discs (3 of them) removed, hence the late start to this season. Anyway, a few days ago I hit a small stream one day and a large river the next day for a trial run to see how the body would stand up to a sixty minute spin session in them. I pulled reasonably well, it was good to get some practice in to hone up the casting skills, nice to be back in the water even though the water temperature was around the three to four degree mark.

It was now time to do some serious fishing, for my first spin session I headed over to Western Creek in very cool conditions, this little creek does give up a few trout early season as well. It's still Winter too so it's going to be cold at the creek and with more rain forecast it probably won't be a long session either. The reason I headed to Western Creek was because it had risen several inches after yesterday's rain plus it's a very nice creek to fish early in the season and it's easy on the body. I wasn't fussed about having an early start either due to the weather conditions, it was 9:25am when I hit the water and boy was it cold on the legs & feet. Even with my thermal gear on it didn't take long before my legs and feet were freezing. With the water being a little clouded ( or milky as I often call it ) the Mepps lure of choice for starters was a #0 (2.5gm) Aglia micro pigment Rainbow spinner, a colour that works well on the trout in cold water. If that doesn't attract the attention of a trout then I'll go to a Aglia Fluo Tiger, another very good cold water lure, both the Rainbow & Tiger models have done well on the trout here before.

I would have liked the creek to have been a few inches higher than it was but it was still at a reasonably good wading height. The first long stretch of the creek I started to fish was around eight metres wide and varied in depth from around 40cms up to 90cms. I kept to the left hand side of it because it was the shallowest side and the easiest to wade, plus there wasn't a lot of dense foliage along it either. When fishing water that varies in depth it requires one to raise the rod when fishing shallow runs so the lure isn't bottom bouncing, then keeping the rod lower to the water when fishing the deeper sections. It doesn't take all that long to learn what to do, it also varies with different weight lures too. If you're a beginner to spin fishing with lures that's where it pays to have a few practice runs using a variety of weighted lures before some serious fishing.

The third long cast directly ahead of me was when the first trout of the 2020/21 season took the Aglia rainbow spinner. Once hooked this medium size brown made quite a few leaps from the creek, all I could think of was “please stay on,” it did and I had the fist trout of the season in hand, this fish was only lightly hooked too. Lady luck was on my side, catching the first trout of the season is a great feeling and a big relief too. I can't tell you how many times I have hooked and lost the first trout of the season over my many years fishing the rivers, it's been quite a few times. I'm always full of nervous energy on the first trip each and every season, you'd think after all my years of chasing trout I'd be used to it, well I'm not. I continued on slowly fishing my way upstream when a trout had a crack at the anti kink and not the spinner, not long after that another brown had a go at the Aglia spinner and missed being hooked. I mumbled a few choice words when that happened while at the same time thinking I'm so glad that the first trout stayed on. That was the last of the trout until I reached a section of the creek where another small creek entered it, that small creek was running dirty. It was here I hooked my second trout of the morning after a cast to a shallow section of Western Creek to the right of where the small creek entered. On the retrieve I noticed a bow wave appear out of nowhere, as it drew closer I gave the rod a light twitch to make the spinner blade flutter, that did the trick. The trout took the rainbow spinner with aggression, this fish was well hooked, it made several runs and leaps from the water before it tired and I had it in the net at 9:59 am. How did I know the exact time I had it in the net? You may ask, easy, the time is displayed in my camera. It wasn't a big fish, just a nice well conditioned 380 gram brown. The light fog had lifted and the air temperature had risen by a couple of degrees which was good as there was still plenty of good stretches of water ahead of me to be fished. The trout in this creek are mostly light coloured trout, only the odd one is a dark brown in colour.

While I continued fishing my way upstream I could feel the air becoming cooler, the clouds were looking a lot darker, the rain that was forecast was on it's way. It was really getting cold again, to make matters worse there wasn't a sign of a trout since I had caught the second one forty five minutes earlier. There was still some nice water ahead of me to be fished, before I could fish it the rain arrived. I put up with the rain for several minutes until it became heavier, I was getting wetter and feeling very cold, it was time to get out and head back to the car. Once the rain becomes heavy on the shallow water whether it be a creek, small stream or a river the trout shut down anyway, so it's not worth fishing on. It was the right decision because once back at the car it pelted down and stayed like that for the rest of the day. The end result today wasn't to my liking with just the two trout being caught, the good thing was I had a score on the board. Funny thing is, my first trip last season I only managed to catch two trout as well, that was on the 12th of August. 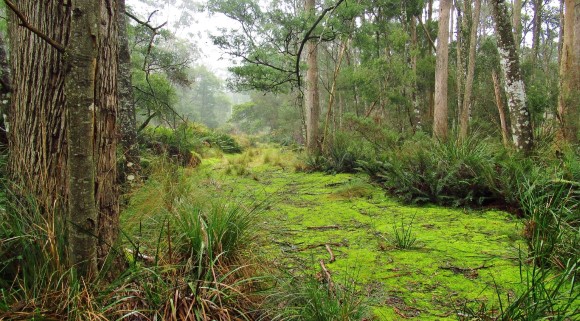 Scenic walk back to the car 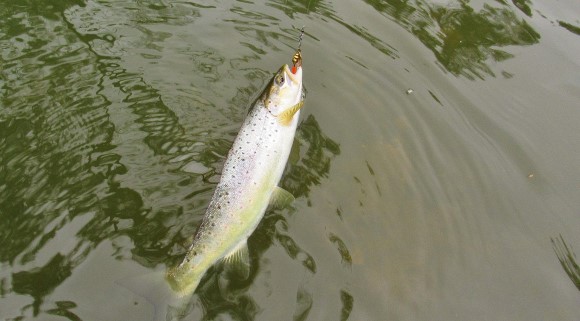 Second trout that fell to the Aglia Aglia rainbow 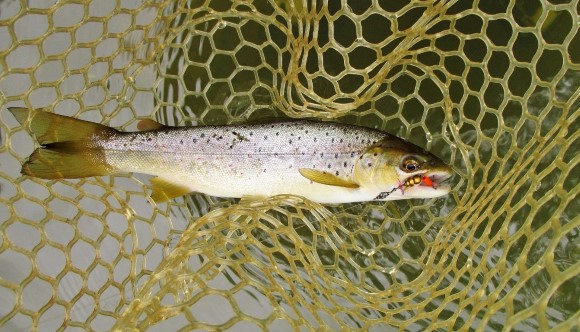 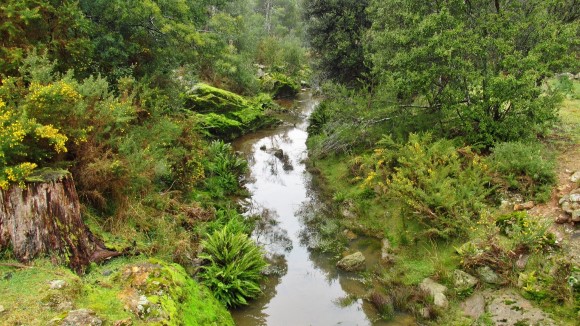