This report covers two consecutive days fishing tannin waters after some decent rains that got the streams up and running to a good fishing height again.

The first trip was the morning after we had 26 mms of rain the day before and into the night and once at the river I found it to be running at a nice height and a very dark tannin colour. Several weeks ago I fished this same little tannin stream and had a good four days of fishing in it, I'm hoping for the same result again this trip. I was in the water at 8:20am and started off with a #00 White Miller Bug spinner, the same little one that did a good job in dark tannin water here before. The area I started off in is the upper reaches and the last trip here (7th March) I caught & released thirteen trout. Even though the water was a little higher and faster flowing it was still good enough to be holding trout in flat water on both sides of it. I slowly fished my way upstream casting the Bug into the flat waters on both sides of the stream and waited for a strike as I retrieved the lure each time. Nothing happened, not a single touch from a trout, not even a bow wave behind the spinner, the trout weren't here. I kept at it until 9:00am without having a hit, in the end all I managed was a follow in a wide flat water and that's as far as it went. I had fished around three hundred meters of water trying a variety of Mepps spinners, it was now time to try another area on this stream, I decided to head to one of my favourite stretches of water a kilometre & a half downstream.By the time I walked back to the car and drove to where I wanted to fish, then walked to the stream it was 9:35am. The area I'm fishing was more open and shallower than the area I had just left, it's here I'm hoping to break what could finish up being a “donut” day, something all fisho's dread. I started off with the White Miller here as well & only used it for a few minutes without success before changing to a #00 gold Aglia spinner. Not all that long after the change of lure when I cast the spinner into a small flat water that had some debris next to it, I had my first hookup of the morning. I was stoked, my first trout of the day was on, that's where it ended, that little trout made a leap from the river and out popped the lure. A little under ten minutes later & with a backhand cast into a small flat water when a nice little brown snapped up the gold Aglia. This time it stayed on and I finally had the first trout of the day, the drought was broken as was the “donut” day. Well, that was the last fish hooked for quite some time, another change of lure was required. This time it was the #00 March Brown Bug spinner that drew the attention of a small brown in a shallow flat water. That little brown didn't hesitate to take the Bug and I had my second trout of the day landed, that was thirty minutes after the first trout was caught. A little further up I had a couple of follows before another brown was caught and released at 10:55am. With the trout being so few and far between I thought it was time to call it a day and head back here tomorrow afternoon and start off from where I finished today. By tomorrow afternoon the water level will have dropped a little and I'm hoping that will bring on a few trout, well that's if there's any in the area..

The conditions were still quite good for trout fishing today with light winds, plenty of cloud and quite cool, the water level in the stream had dropped by a couple of inches as well. It was close to 2:00pm by the time I hit the river where I spent a few minutes watching a resident Platypus drifting along in the tannin water. This trip I started off with the same set up I finished with yesterday, the March Brown Bug spinner and it only took fifteen minutes this time to catch the first trout. A solid 330 gram brown was taken with a backhand cast directly up a narrow heavy foliage covered stretch of knee deep water. This was the start I wanted and hoping for it to continue on like this for the next couple of hours or so. Six minutes on and I was onto another trout, this one was a smaller fish, like the one caught earlier it was a very aggressive take. What looked like being a good day on the trout soon turned sour as the trout were hardly seen after those two fish, they were very few and far between. I did have the odd follow and light hit and miss before I hooked and lost one in a large deep open pool. I wasn't all that far from the car now and knew I was wasting my time fishing on any further so pulled the pin at 3:35pm. It's been twenty days since I last fished this stretch of water and on that day I caught and released fifteen trout. This just goes to show how a stream can change in such a short time. With the season closing in a couple of days I'm hoping to add a few more to my season's tally.. 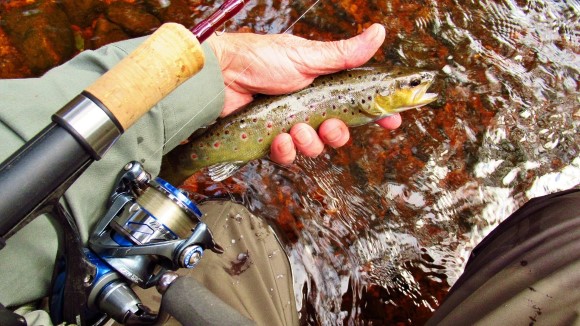 First of the afternoon session 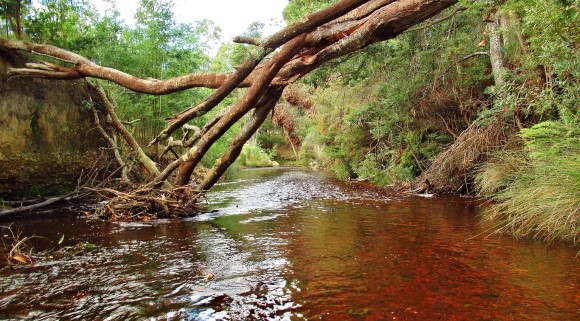 Great stretch of water no trout though 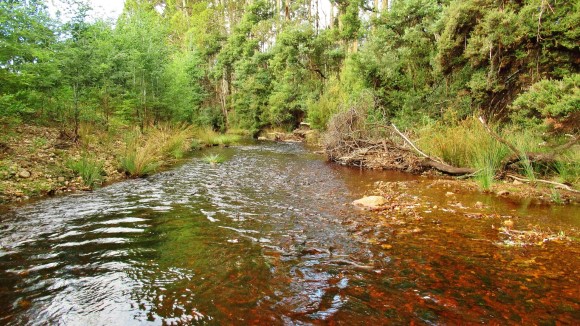 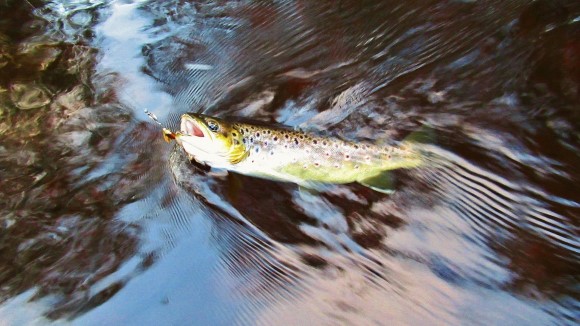 The last fish of the season 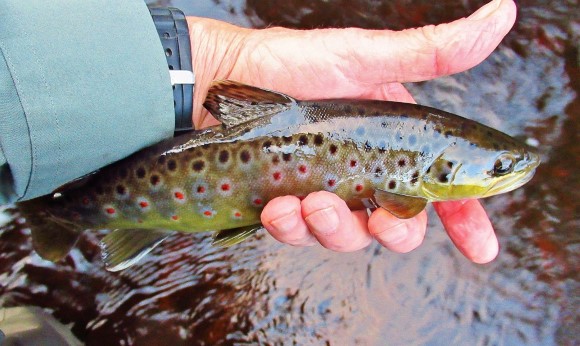 The last trout of the season about to be released