400th trout of the season

After five days of not being able to fish due to windy and wet conditions today I headed back to the same little tannin stream in the hope the trout may be out and about seeing as the river is running a little higher than my last visit. The weather today wasn't all that bad either, plenty of cloud cover with patches of sunlight every now and then, the cool air temperature ( 9 degrees ) was also bearable for a change. It was a late morning start as well, just on 11:10 am when I finally hit the water after a nice long walk to get there. Seeing as the little well used gold #00 Aglia did the job a few days ago I stayed with it to start off the spin session. With the water level running a little higher and faster I did think about going for the larger #0 gold Black fury but decided to wait and see how the little gold Aglia performed first.

After several cast and retrieves to start off the session I did have a follow from a trout which was good to see, that's as far as it went for the first few minutes. A little further upstream and only a few minutes later I had my first strike and hook up, it was fish on. It was a quality fish too and one that was in pretty good condition, not only that it was trout number 399 for the season which was even better. After it's release I slowly continued working the flat waters along both sides of the stream, that's where I felt I'd pick up my 400th trout of the season. It only took another nine minutes before I was onto another well conditioned brown and this one was bigger than the last fish. I was feeling a little worried that it may toss the spinner as it kept leaping from the water, thankfully it stayed on all the way to the net. Finally with only five days of the 2019/20 trout season left I reached the four hundred mark, well down on last season's catch that's for sure. I had set myself a target of 600 trout for this season then realised at the end of December I was not going to reach it, then thought I'd go close to the 500 mark, I wrote that off in March. Reaching the 400th trout was a good consolation prize in a way which I was quite happy to accept. Any way, from now on every fish caught is an added bonus to my season's tally..

After a quick photo the trout was soon back in the water and I was back into working my way up what was left of this long stretch of medium flowing water. Five minutes on and I was onto another nice brown, the idea of staying with the little old gold Aglia was proving to be a good one after all. The next couple of runs were a little quiet, though I did have a couple of hits I missed hooking them. It took around fifteen minutes after having those hits when I was onto another trout, this one was a smaller fish and was soon in hand. No sooner had I released that fish when two casts later I had my fifth trout of the session landed, these were all bonus fish now and I was hoping they would continue to keep on coming. Then there was a lull in the fishing, the trout seemed to have changed from being aggressive to just nipping at the spinner. It took another thirty minutes before they came on the take again, they were back into taking the gold Aglia.

Most of them were small to medium size trout, not that it worried me at all, the main thing was they were back with aggression once more. It wasn't all that long before my fish count was into double figures with ten on the scoreboard, then it dropped off again not all that far from where I had parked the car. It was just on 1:30 pm when I picked up another trout, not long after that I caught another two trout just before 2:00pm or thereabout. My day was done, with thirteen trout caught and released as well as one very sore body it was time to call it a day. With more poor weather forecast over the next few days I'm still hoping to have at least one more spin session before the season closes for three months. The good thing was my seasons tally had jumped from 398 trout to 411 which I'm pretty happy with, better still it was the small tannin waters that really built my catch rate up to what it was mid season when I was struggling to hit double figures. Another good thing that came out of today's spin session was the fact I caught a lot more trout than I lost for a change and I didn't have to change the spinner. I reckon the small tannin streams have gone close to giving up half of my total catch for the season, I know more when I sit down and go through my seasons stats on the rivers and streams I've fished over the past nine months. 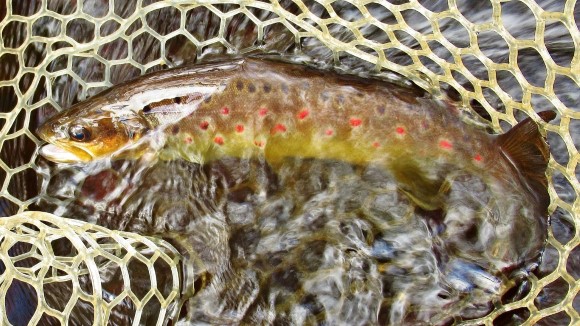 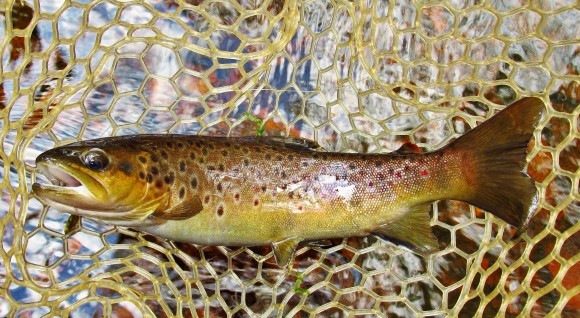 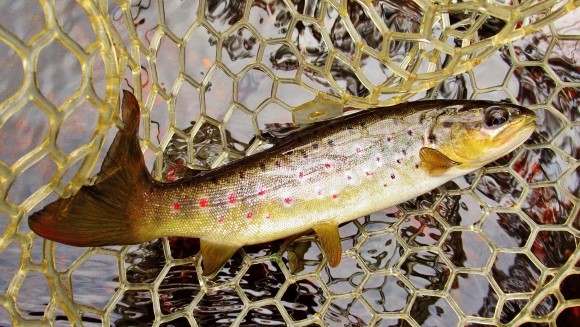 Another brown ready for release 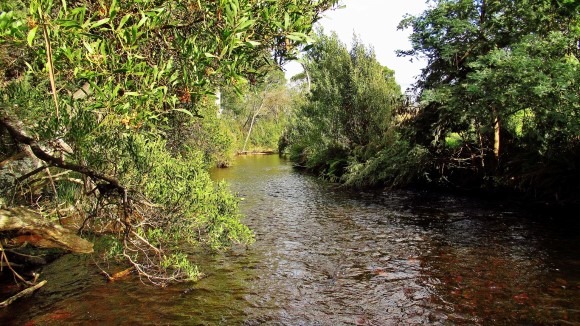 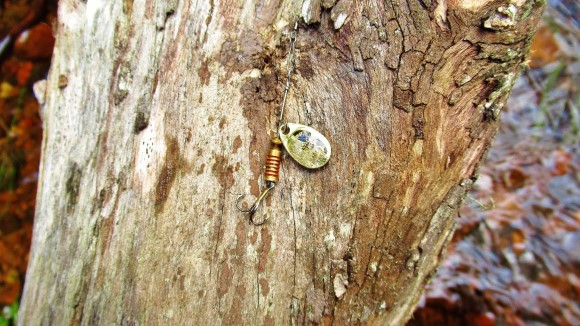