With most of the larger rivers running high & fast I thought it best to head over and hit the small streams again as they're much safer to fish, even though there's plenty of water in them they are still okay to hop into and chase trout.

The weather was damp with light drizzle showing up every few minutes and a very cool air temperature of just eight degrees. I arrived at the area I was about to fish when a couple of young boys (7&10) who were helping their parents repairing a paddock fence wandered over for a chat and wanted to know how to catch trout.

I spent around thirty minutes giving them all the info they could take in, before heading off through the bush I gave them a couple of Mepps booklets plus several Mepps spinners to get them started. It was 2:40 pm by the time I hit the water and started flicking a #0 Aglia Fluo rainbow spinner into the cold dark tannin water.

I thought with the conditions being so dull and the water a dark tannin colour the Fluo lure may suck in a trout or two. After several casts without any signs of trout in a wide medium deep stretch of water I went for a change of lure as I moved into shallow waters. My choice of lure was the ever reliable small gold #00 Aglia spinner and one that's been used a lot of times and is showing the signs of it's use, it's saved the day for me on quite a few trips. Light drizzle started again as I slowly fished my way up this little stream, with the rain came the wind just to make it that much colder on the body.

I knew if I didn't catch a trout soon I'd be calling it a day, not that it was going to be a long spin session anyway. It wasn't until I moved into a long narrow run when I did a back hand cast up the river and lobbed the spinner dead centre between the overhanging tea trees. It was the perfect cast, on the retrieve a bow wave appeared behind the gold Aglia, all it took was a light twitch of the rod and it was fish on. It hadn't taken all that long to catch the first trout either, in fact it was only fifteen minutes into the session to do so.

The thing is, when one is damp and cold it always seems a long time to catch a fish even though it's only been a short time. I know one thing and that's when one does catch a fish suddenly you don't notice the cold, it's straight back into full concentration on the next stretch of water. Six minutes on I picked up the second trout with another perfect cast into a small tight water, two trout in quick time, that's how fast it can turn around.

Well, that was it, after the release of that last small brown I hooked and lost four small browns. I had intended to fish another stretch of water half a kilometre away but decided not to fish on any longer as the clouds were looking a lot darker and there was more rain on the way, my session end at 4:15 pm. With just the two trout caught from six hook ups was pretty disappointing, had it been four caught from six hook ups I would have gone home much happier than I did. Some days they stay on and you catch more than you lose, other days it's the opposite, like I keep on saying, that's just the way it goes when chasing trout in rivers & streams. 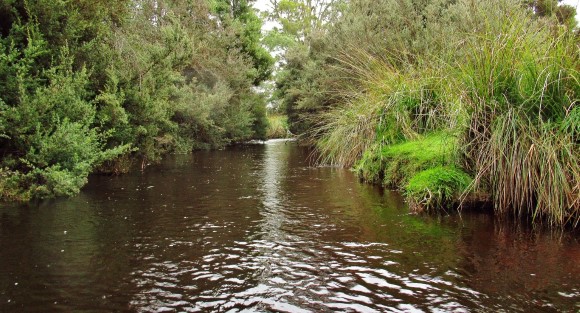 A long cast upstream resulted in the first trout being caught 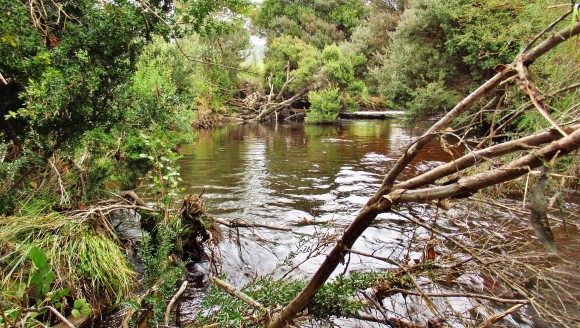 Looked fishy but it wasnt 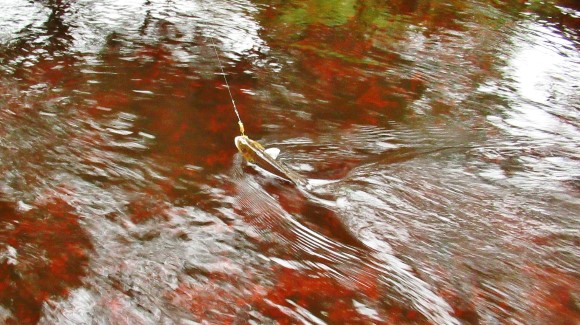 One of only two trout caught today 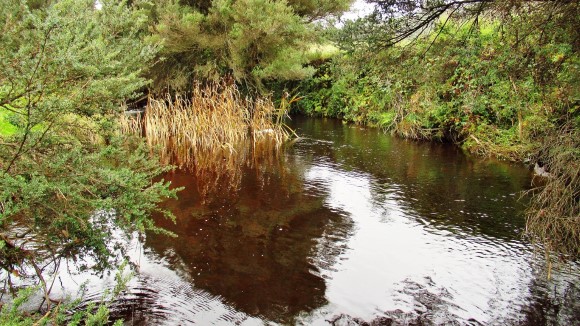 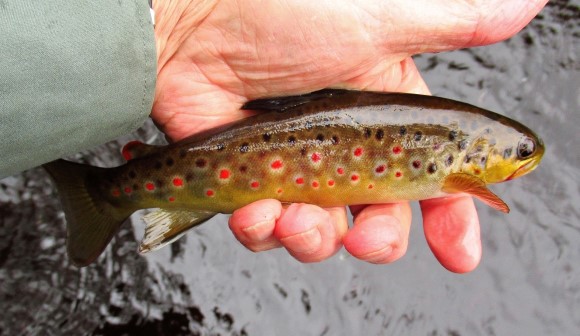