After some decent rain a few days ago I felt a trip back to the tannin waters may be the go, with plenty of water in them there should be a few hungry trout around. This trip was to a stretch of water I haven't fished since the 8th March which is exactly a month ago, on that trip I caught and released nine trout. If I can catch that amount again on this trip I'll be pretty stoked seeing as this tannin stream has slowed down with the trout on my previous trips. Seeing as it's been a month since I've actually fished this stretch of water it will be interesting to see how it fishes this afternoon.

This trip was also a late afternoon one, it was 2:45 pm by the time I hit the water and the conditions were still quite good, though it will cool down quite fast at this time of year. The water level was still at a good wading height and the dark tannin colour had lightened up since the last trip to this stream. I started of with a #00 copper Aglia and had a couple of follows and light taps on it before I finally had a nice brown take it after casting the spinner into the top end of a nice narrow knee deep piece of water. Eight minutes into the spin session I had the first trout landed, just the start I was looking for. Still, I have had starts like this before and they've often turned out to a very disappointing time in the water with very few fish caught.

After the release of that trout the following three stretches of water fished poorly with just the one follow from a small brown. I tried several different coloured spinners and had a few follows but no takers, it wasn't until I went with the #00 White Miller an hour later when I caught the second trout of the afternoon. I thought it was a decent size fish as it darted every where peeling line from the spool, it wasn't until I had it in close enough when I saw it was foul hooked. Once in the landing net out popped the lure from it's front fin, it wasn't damaged and soon released back into the stream. Then five minutes (4:05 pm) later at the top end of the same stretch of water I hooked and landed my third trout. With just the three trout caught and released so far it wasn't looking all that good for a decent catch rate.

The further upstream I fished the less follows I was having, it was nearly time to get out as the sun was lower and it was becoming darker. As I moved through a heavy overgrown area in the river my line became tangled in a tea tree bush and I had to remove the White Miller from the little snap swivel to free the line. Once done I moved into a narrow piece of water, the first cast directly upstream the lure was taken in quick time. I had my forth trout on, well that was until the trout gave a solid head shake and it was gone. The line was limp, I though that trout has snapped the line or perhaps it had parted ways at the knot.

Once I had retrieved the line in close enough I could see the White Miller lure was missing, everything else was still intact. The problem was caused when I placed the lure back onto the small snap swivel, I had missed locking it on properly. So there's a trout swimming around in the tannin water with a new White Miller attached to it jaw, hopefully it will soon part ways with the trout. With that happening I decided I'd had enough, called it a day and headed back to the car. I will return here again before season's end, actually I don't have much choice any way as travel restrictions apply now due to the Corona Virus that's hit Australia. Thankfully fishing is still allowed at this stage and I am lucky enough to have around four kilometres of river to fish thanks to a very kind land owner..... 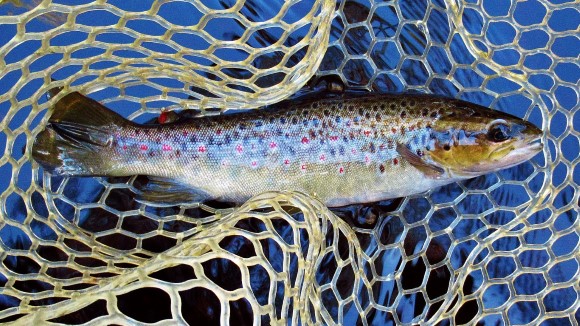 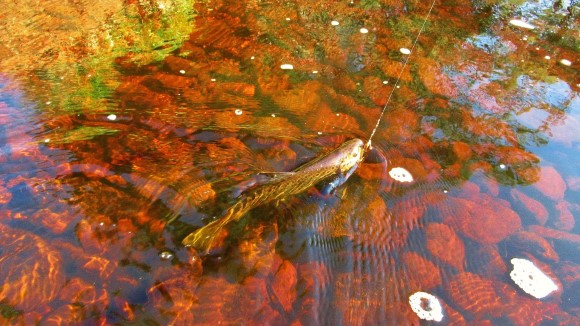 Copper Aglia catches the first of the day 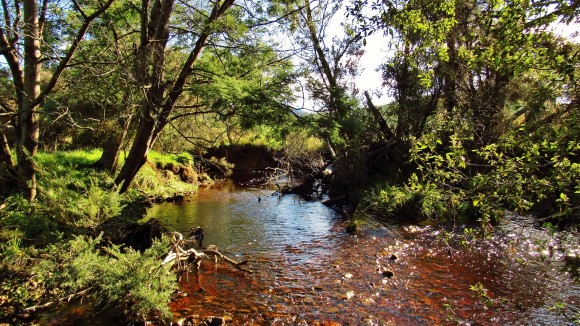 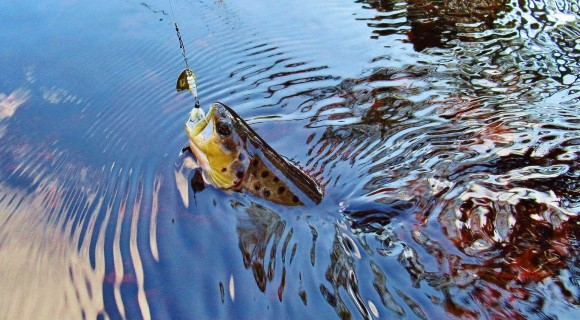 First trout to fall to the white miller Bug 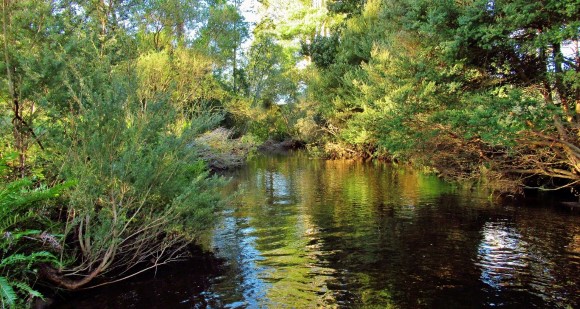