Today's weather is not as good as I was hoping for as it was bright sunny conditions with a North Easterly wind blowing at 15 kph which will make for a tough time in the small tannin stream I'm heading to this morning. It's also a day to be on the lookout for snakes, perfect weather conditions for them to be out and about. I was a little slow of the mark in heading to the stream due to the long spin session I had yesterday the body was a little on the sore side this morning.

By the time I walked (1.5kms) and reached the stream it was 9:20 am, a little late given the conditions that were forecast. The stream had dropped in level as I had expected it to, any lower and I wouldn't have fished it. Today I started off using a gold #00 Aglia Mouche Noire just for something different to see if the trout would take it in the low, light tannin waters. This 1.5 kms of is very tight fishing as it's pretty narrow over the distance and the foliage isn't as thick, it's more open than other areas I've previously fished.

The first stretch of water fished was a mix of sun and shade, it was here I had a hit and miss on the forth cast. The fifth cast a gust of wind hit side on and carried the spinner into the tea trees at the top end of the water I was fishing, tea trees like bushes that don't let go of a lure once it's in them. Good thing was the lure was in reach and easy to get at, the bad thing was by making my way upstream to retrieve it any trout there will be gone. In the next narrow run of water the same thing happened again, this time it was dead wood and branches on the right hand side that the wind gust took the lure into, it took me several minutes to untangle it this time. I was beginning to think perhaps I should have stayed home, I felt I was starting to lose the plot, it hasn't been one of my best starts to a spin session, in fact it's probably been my worst all season.

Thirty minutes later and some fifty meters further upstream I was finally onto my first trout of the morning, it was a plump medium size fish at that and like all the others I've caught on previous trips it was in top condition. This trout was taken at the top end of a small stretch of water, thankfully it liked the gold Aglia Mouche Noire. It was close on fifteen minutes when I moved into the largest and deepest stretch of water in this little stream, a stretch of waist deep water that's divided in two by a large fallen tree. After having a hit and miss in the first couple of cast & retrieves it wasn't until I flicked the spinner close to the fallen tree when a nice brown (325gms) snapped up the little Mouche Noire. After it's release I slipped myself over the fallen tree and started fishing the second half of the deeper stretch of water, it wasn't long when I had a hit but missed it, two casts later another brown (310gms) took the gold spinner. I was feeling a lot happier now with three nice well conditioned trout caught and released, better still, they were on the gold bladed Aglia Mouche Noire that I took a gamble on for starters.

After that the following few narrow stretches of water didn't give up a fish, I was still hooking the odd tea tree in the trying conditions. The next water I was about to move into (10:30am) was a lot shallower and lighter in colour so I changed over to the March Brown Bug spinner, the same lure that did so well on the trout yesterday. The first half of the sun filled water there wasn't a sign of a fish, it wasn't until I was into the second half of it when I cast into a narrow piece of head water (10:35am) when a solid brown followed the spinner into the open water and took the Bug. This fish was the best one of the day so far and it fought like hell in the shallow water, like all stream/river wild trout this fish played up all the way to the net. As it turned out it was the biggest of the spin session, a 345 gram beauty.

From here on the trout were caught in ten to fifteen minute intervals in the shallow and knee deep waters, from 10:35am through to 11:10am I caught & released six trout. With nine trout caught in total I wanted another double figure catch before calling it a day and the way it was going I thought I'd reach it fairly soon. Well that didn't happen for quite some time, after having several solids hits and one hooked and lost fish it wasn't until 12:28pm when I finally hooked and landed my tenth trout of the spin session. I couldn't believe how long it took to catch that last trout, the water I fished was a lot shallower the further upstream I went, I still had the hits from trout much earlier, just couldn't hook them. In the end I did achieve the double figure that I wanted which topped off a day of highs & lows in the little tannin stream that has given up 47 trout in four trips. There is some rain forecast in a couple of days, hopefully it's enough to get some good flow back in these little tannin streams. 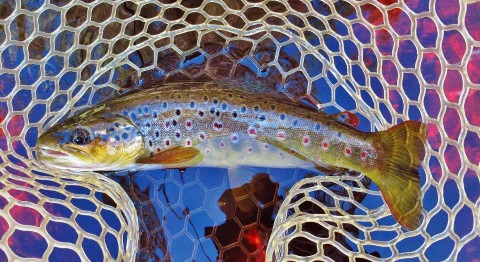 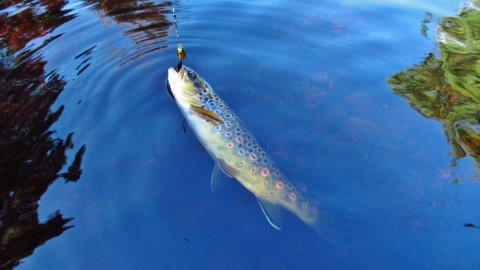 First trout of the session 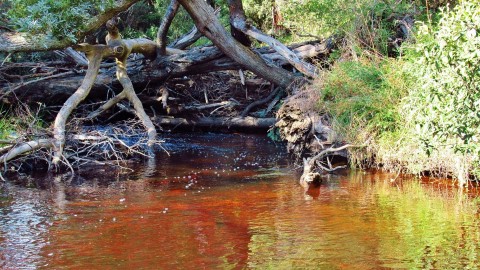 One of the hazards when fishing small tannin waters 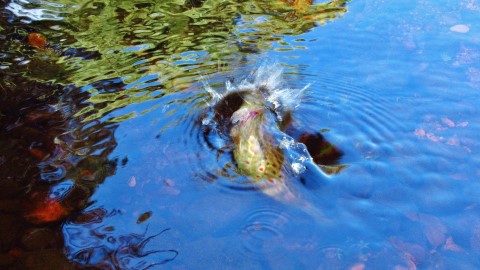 This trout took the spinner on the surface 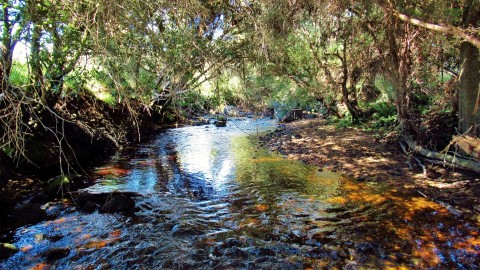 Water level now on the low side