Wild windy weather is going to hit later today and it's going to hang around for the next few days so I thought I'd better get a spin session in before it arrives. When I arrived at 9:05am the first thing I noticed the water level had risen by around three inches which was great to see, yesterdays much needed rain did the job.

The rise in water level meant the trout should be in a aggressive mood with any luck. With the water being higher meant I could also use the anti-kink today and my spinner of choice was the Mepps #00 White Miller the same lure that caught thirteen of the fourteen trout a few days ago. The tannin coloured water was only marginally darker so everything was looking good for a spin session here today. By the time I had my wading gear on and hopped in the stream the wind had arrived, even though it was still sunny the air temperature wasn't all that warm.

The fishing was very quiet over the first ten minutes before I finally had a medium size brown take the white miller in a rush, one hit and an instant hook up. That brown didn't stay on all that long, two leaps from the stream it tossed the lure. I may have missed catching my first trout of the day but the good thing that came out of it was that it was an aggressive attack on the lure.I continued fishing my way up the stream with not a sign of a trout for nearly twenty minutes when I had a hit and miss which raised the spirits. I was starting to wonder where they had gone, with the rise in water level they may have moved further upstream now from where they normally held out.

Funny thing here I am wondering where they may have ticked off to when on the very next cast the spinner was snapped up in quick time. No sooner had the lure hit the water a bow wave appeared behind it, one light twitch off the rod the trout took the white miller. I had the first trout of the session on and soon landed, it was a nice medium and beautifully coloured brown trout that was quickly released back into the stream. It's always a relief when one catches the first of the day when the fishing's been a little on the slow side.

After the release of that trout I had another hit and a miss, it took me twenty five minutes before I picked up the second of the day & just another five minutes to catch the third. This is one of the things I love when trout fishing streams/rivers, it can turn around so fast from having nothing or just the one fish then all of a sudden one can pick up two or more fish in quick time. There was around twenty minutes of fishing where I hooked and lost two more browns as well as having several hit and misses, the trout where certainly here & still aggressive but for some reason they weren't staying on.

Then like earlier on I picked up two more at five minute intervals, it all seemed to fall in place they became more aggressive and I starting catching them every ten minutes. Before I knew it I had caught and released a dozen trout on the little White Miller Bug spinner, it was a good choice to stick with it again today. As the session went on the wind really picked up, it was gusting around 30-35 kph which was making it quite difficult casting the 1.5 gram spinner to where I wanted, not only that the air temperature was down to eight degrees and I was really feeling cold.

I kept on saying “I'm just going to fish on for another twenty minutes or so,” then I'd catch a trout or have another hit and miss and this kept me pushing on to the next stretch of water. I did have to change the White Miller spinner due to a damaged hook, the replacement lure was a brand new White Miller so it wasn't a problem at all. I continued to work my way upstream catching small/medium size trout and before I knew it I had caught seventeen trout. I was totally buggered now and looking to the North West I could see the weather was going to get worse in no time at all.

It was definitely time to call it a day and head back to the car that was around one and a half kilometres away. As it happened, it turned out to be a great spin session in the tannin stream again today and the little Mepps White Miller Bug spinner did the job on the trout as I thought it would. The rise in the water level certainly helped bring the fish on as I thought it would and with more rain over the next few days it will really do the little streams and rivers a lot of good. It will freshen them up and make for some good trout fishing over the next few weeks too.

I did go through my previous seasons records again last night and noted what streams/rivers fish really well and that's why I always head to them at this time of the season. Anyone taking up trout fishing I really do recommend that you keep records of each & every trip you go on, the records I've kept for the past twenty years have certainly sent me back to the right rivers every time. Just buy a yearly diary and write in what river & where you fished, what the weather and water levels were on the day, the lures used and how many fish you caught, it's that simple..

** PS: It was a good decision to head back to the car because I had no sooner started to head for home when the rain set in.. One other thing, sadly the best trout of the day a 485 gram brown was kept due to gill damage. 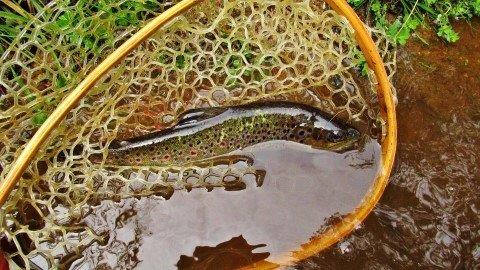 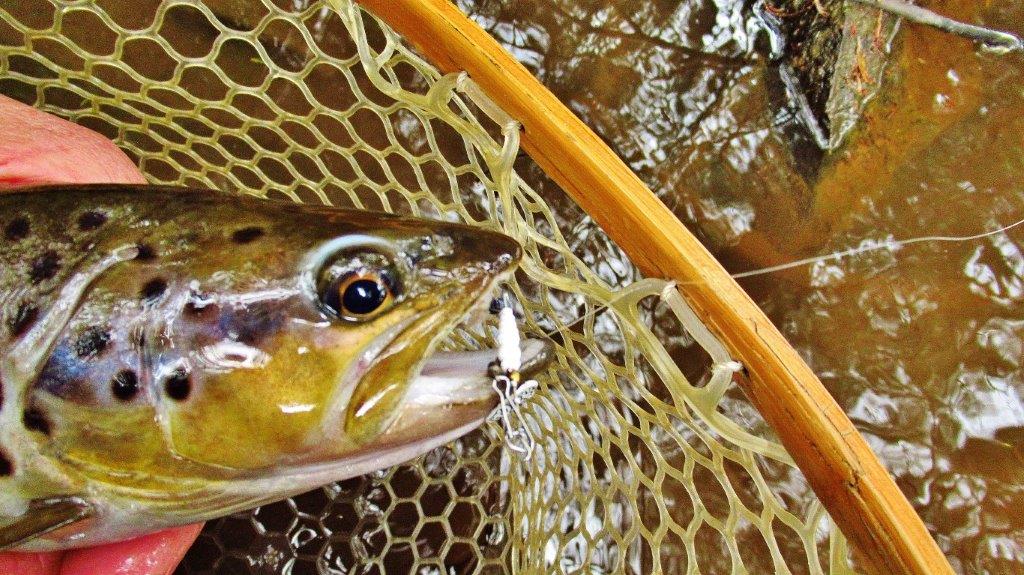 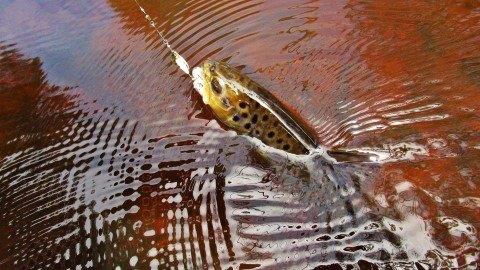 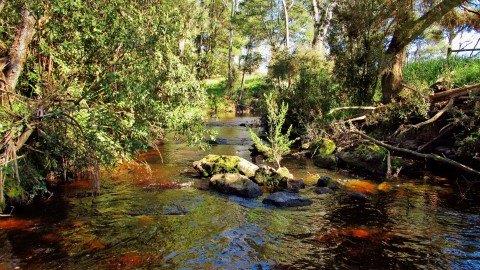 Great day to be in a stream