Today is the day I'm going for my 10,000th Tasmanian wild trout since we moved here back in March 2000 & I'm going to catch it in one of my favorite tannin waters. Looking through a few of my past trout seasons records I found that these tannin waters fished extremely well at this time of the season so that's a good enough reason to head there. It proved correct yesterday when I fished a new tannin water, the trout were there and pretty aggressive and with cooler weather and recent rains they'll be on the take today.

I only need seven trout to reach a milestone I never countered on getting, in fact one that was never planned for. It was only by going through my previous end of season trout reports that dated back to March 2000 that I noticed I was only 129 trout short of catching 10,000 trout which blew me away when I found out. So today is the day I am going to reach it, in fact I will go well past it going by my previous season trout reports. The weather was a cool twelve degrees with rain forecast for later in the day, the sky was mainly cloudy with patches of sunlight every now and then, the biggest problem was the gusty 20-25 kph N/NW winds. It wasn't an early start for me either as I didn't hit the water until 11:20am, that was mainly because of the weather conditions.

The river was up slightly from yesterdays rain which was good as it meant the trout would also be feeling refreshed and in a aggressive mood. I started the spin session off with a Mepps #00 Stone Fly Bug spinner, it's always a good trout attractor most times and it did draw the attention of two trout in the first section of water I fished. Seeing as they didn't attack the lure I decided to go for one that every now and then produces a few surprises, the #00 White Miller Bug spinner. It's a spinner that I use every now and then, also a spinner that sucks the trout in from time to time when conditions are suitable. Today was one of those days when I felt it may just suck in a few trout and with a few caddis (white) moths hovering above the water it could do the job today.

I was only five minutes into the spin session when the White Miller sucked the first trout in, just a nice medium 300 gram brown. Three more cast and retrieves straight up the narrow water I had several hits and one hook up which I lost, the trout were in the right mood today. After climbing over a few logs to reach a small pocket of water I flicked the spinner close to the left side off the water and it was taken in no time at all, two trout in just over ten minutes it was all go today. I had to get out of the stream to go around a large log jamb then hop back in some twenty meters further up. From here on I had several hits and like before the trout missed getting hooked, the aggression was still there so I wasn't changing lures yet.

Finally after fifteen minutes I had my third trout landed, ten minutes later I was onto another medium size brown, it stayed on and I had my forth trout. I hooked & lost two more trout and it took another twenty minutes before the fifth trout was landed, five minutes on I had number six in hand. With just the one trout to go now I was feeling a little nervous but also confident I would soon have the trout required to hit the 10,000 mark. After having several more hit and misses then hooking and losing another fish there was a little cursing going on. I was still confident of catching the seventh trout, it was just the frustration of hooking and losing so many that was the problem.

I had faith in the little White Miller Bug spinner, I wasn't about to make a change of lure any time soon. It was 12:26pm (time in the camera) when I caught the sixth trout and I had so many chances in that time to catch the seventh, just another thing that bugged me. As I moved into the next stretch of water I disturbed a small trout at the tail end of it and I thought that it's probably spooked any other trout that's here. I was near the top end of it and flicked the white miller right next to the bank that was covered with overhanging ferns, it was the deep side of the stream.

Nothing happened on the first cast there but the second cast was much better when the white miller was taken hard and fast, I had the trout hooked that I needed reach the milestone. What made it better is that it was a solid fish and the best of the spin session by far, it was well and truly hooked. I did hesitate to get the camera out and video it at first then after seeing how well it was well hooked I couldn't help myself. After a short tussle with the fish of the session so far I slipped the net under it, I had the fish I needed in the net at 12:50pm.

After taking a couple of photos of the 485gm trout as well as a selfie holding the fish it was returned to the stream. It took a little while to take it in and even while I'm writing this I still find it hard to believe what I have achieved since moving to Tasmania back. I do feel proud of what I have achieved over my 54 years of trout fishing here and back in South Australia where I started my trout fishing.

Yes, I suppose it is a pretty big milestone in my trout fishing years, one I'm sure I will cherish for a very long time. Another thing I forgot to mention was that when I caught the sixth trout I remember while doing the video I said I wasn't overly fussed what size trout I caught to reach the 10,000th trout because it's really all about being here doing what one loves. Trout fishing rivers in beautiful surrounds is what it's all about, the size of the fish to me isn't all that important, though it was nice to get one that size for the milestone wasn't it. Right, now back to the rest of the spin session, I continued fishing my way up through several stretches of shallow and medium depth water still sticking with the white miller spinner I picked up another five small to medium size trout on it.

I was still having a lot of hit and misses so I finally had a change of lure, it was back to the stone fly bug spinner. I caught another solid brown with it, a beautiful trout that was marginally smaller than the trout of the day. Not long after that I had a few more hit and misses on the stone fly before I went back to the white miller to fish the last two runs before calling it a day. It was the second to last stretch of water that gave up my fourteenth trout of the day, it too was a beautiful well conditioned fish and a great way to end what was a memorable day in a small tannin stream, the spin session ended at 3:15pm. No pressure to catch the trout now I'm sure the hit and misses will now be less and the hook ups more frequent.. Well, I can only hope that's how it will play out.. 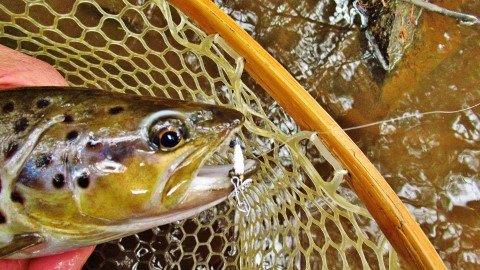 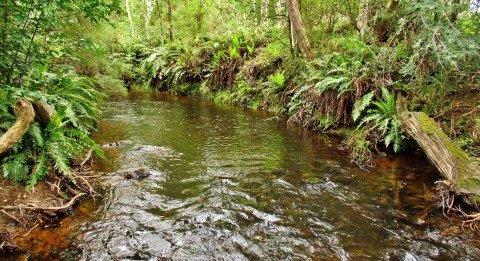 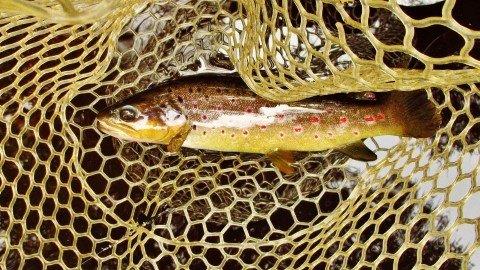 Number fourteen for the spin session 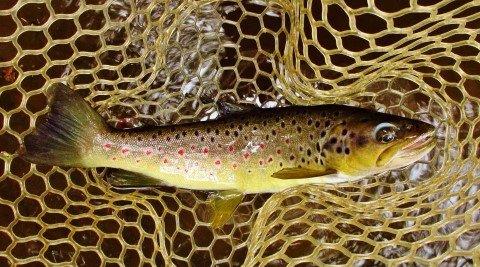 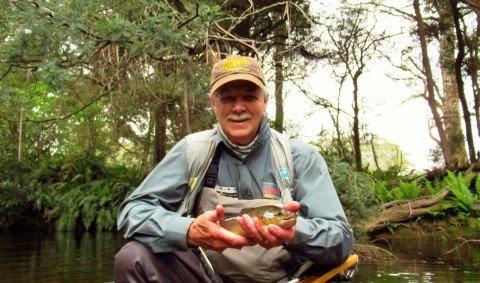