After having around 5-6 mms of rain and with the morning being quite humid I thought a trip to tannin waters would be well worth it this morning. I was just about to leave when the rain arrived again so I had to sit around for an hour before heading off. This trip involved a long walk and plenty of bush bashing to reach a new tannin water, one I came across while looking around on Google Earth. With nineteen trout still needed to be caught for me to reach a milestone of 10,000 Tasmanian wild trout I thought the change to a new water may help bring it that much closer and maybe a little quicker.

It was 9:15am when I started the walk and just on 9:55am when I finally reached the water. It took me another ten minutes to catch my breath because the bush was much thicker tougher than I had expected. I was quite happy to see that there was a reasonable flow in the stream. Better still, I noticed a small circle appear on a short flat water which meant there were in fish this stream, seeing that may have made the bush bashing worth it. I'd be quite satisfied if I can catch and release a minimum of half a dozen trout this trip, any more over that would be a real bonus.

I started the session off with a gold #00 Aglia Mouche Noire and it wasn't all that long before I had a hit and miss from a small brown, two cast later the same thing but still no hook up. I needed a lure that was going to turn them on so I went for the March Brown Bug spinner seeing as it's done well in tannin waters before. A few casts into a medium deep stretch of waters resulted in a couple of solid hit and misses before I picked up a very small brown in a short shallow piece fast water. I reckon that little brown was close to being the smallest one I've caught so far this season.

Ten minutes on I had several more hit and misses plus a couple of hook ups all of which were lost. The trout were certainly here in good numbers and very aggressive but for some reason they're not getting hooked. They're actually darting out and hitting the spinner hard and fast side on in the shallow water, that's why I felt they're not being hooked. I'm sure it's due to the water being shallow and a light tannin colour that has a lot to do with it too. Another change of lure was in order, this time it was on with a black #00 Aglia Mouche Noire another spinner that's always done well on the trout in most waters.

This time I went for the #00 Stone Fly Bug spinner, another lure that always performs well on the trout. The half a dozen trout I was hoping for was looking good and with any luck I could add a few more above that if I can just them to stay on. The aggression is there, it's just the way they're taking the spinner that's the problem. Another thing I did was to take off my anti-kink set up, that was mainly due to the water being so low the extra weight ( not that it was all that much 2gms if that ) was keeping the spinner too close to the bottom. I knew this would create line twist as the spin session went on but I was willing to put up with that if it produced a few trout, not only that it would stop the lure fouling up each time it touched the rocky algae covered bottom.

It certainly made a difference because it wasn't all that long before I was onto a trout in a shallow stretch of water, trout number seven was caught. From then on the fishing did improve and the spinner wasn't being fouled with green algae but the line twist soon appeared. The line twist wasn't bad enough to make me go back to using the anti-kink at this stage and with the rain getting a little heavier I doubt I'd be fishing on much longer. I had now set myself a target of a dozen trout before calling it a day, something I should have already reached had I not hooked and lost so many trout during the session.

I was long before eleven trout had been caught and released, with one trout to go to reach my target I hooked number twelve. It was a beautiful solid brown too which I had on for a while before losing it while trying to get my camera out to film it. Had I just slipped the landing net under it instead of worrying about getting it on video I would have had it. The rain was now the heaviest it's been, I was not giving the fishing away until I had the twelfth trout caught and released.

I was as wet as a shag so it didn't really matter now any way. Thankfully it only took another ten minutes to catch the twelfth trout of the spin session, my day was done and dusted at 1:30pm. Tomorrow I will be heading back to the tannin waters full of confidence in catching the seven trout required to reach the unplanned milestone. Today's rain will give the streams/rivers a lift that will bring on the trout more than it has today. With twelve trout caught from twenty hook ups not to mention the amount of hit and misses I had today, tomorrow will be better and hopefully the 10,000th trout will be caught. 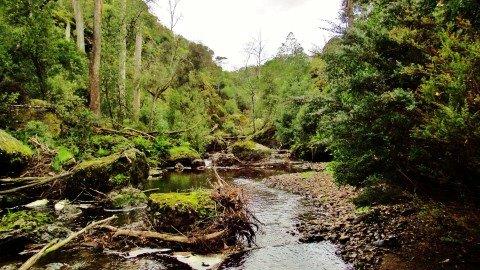 A long tough walk to get here 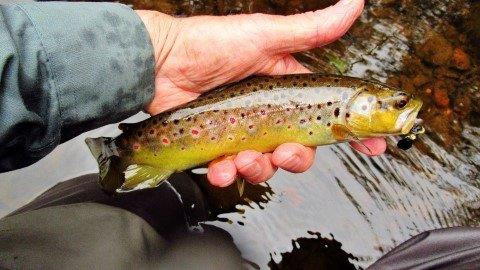 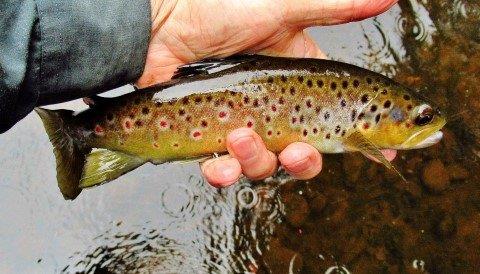 Not big but in beautiful condition 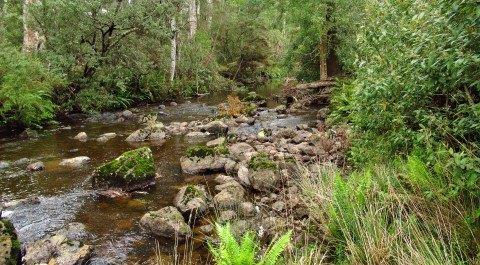 Not easy on the body here at all 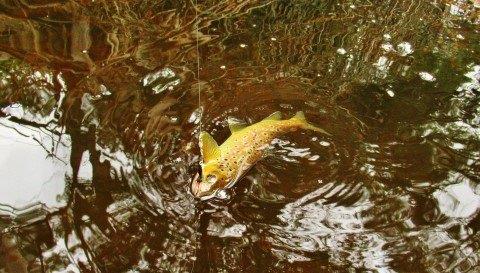 This brown fell to the Aglia Mouche Noire