A light breeze and a forecast temperature had me heading off to fish another tannin water, it's one I had partly fished sometime ago but really would like to fish a lot more of it. Today was the day because that's the area I felt would fish well and give up a few wild brown trout. The water level was around the same as last time, running at a medium to low level and a good rich tannin colour with a water temp of four degrees. There's been some more snow falls in the highlands and we've also had some heavy frosts, that's why the water temperature had dropped two degrees since the last trip.

I knew that it probably won't have a great effect this trip for some reason as I was full of confidence today. I started off (10:10am) using a #0 Aglia Fluo Tiger blade spinner this trip to see how it would go, it's a lure that normally produces fish in cold waters. It was pretty quiet over the first fifty meters of water before I had a hook up and my first trout in hand twenty minutes into the spin session. It was a slow start, much like it started the last time I fished this area so I wasn't overly concerned at this stage.

It's such a peaceful area to fish and it's full of a wide variety of birds that makes it even better when they're in full song like they were this morning. The next couple of runs I had a few hit and misses from some small half interested trout, so I went to the #0 Aglia Fluo rainbow spinner, same results with just a few light hits. I thought it was time to try a small 44 mm olive coloured (improved redfin design) hard body lure sent to me from a friend in Claremont who makes his own lures asked me to try them out on the trout.

I had two of the smallest of the four hard body lures he sent me & with the trout not being all that aggressive I had nothing to lose in giving them a workout. The first few casts in a medium flowing run did draw the attention of a small brown that had a real crack at the lure before it finally took it. A little further up the stream a nice size brown came up behind the lure and looked like it was going to take it when a small brown came from nowhere and took the lure. That was my second trout on the new lure, even though it was a small fish the signs were good for more trout to be taken on it.

The larger trout had darted off upstream, so my next cast was to the top left hand side near some overhanging foliage. I had no sooner started to retrieve the little hard body when it was taken, it was a decent size brown that fought all the way to the net. Now whether or not it was the one I had seen earlier I have no idea, but I was happy to finally get a decent size (430gram) fish at last. It had taken just over an hour to catch the four browns which wasn't all that bad, it was looking good & there should be more trout to be caught.. I was about to move into water I have never fished before and looking forward to seeing how many trout it may give up. Getting to the new water ahead wasn't going to be easy because there was a massive log jam ahead that I had to make my way over.

I couldn't go around it due to high river banks that were lined with blackberry bushes, I had no choice but to go over it, I went over it & boy it wasn't all that easier either. Once over the log jam I could see there was some great water ahead of me to be fished, nice wide shallow/medium flowing dark tannin waters. A few casts into it resulted in a quick hook up on the small hard body lure, trout number five was landed. After that it went a little quiet with a few small trout just nipping at the little lure before I came to another large log jam on the water, another tough one to get over.

Once I managed to get myself back into the stream I was about to go back to the blade spinner but decided to try the red hard body lure that was called a "Ladybird" because of it's colour and several small black dots on it. The waters I fished were all good looking runs that did hold trout, I had several hits but I just couldn't hook them. They really liked the red coloured lure so I thought I would stay with it a little longer as it was only a matter of time before I had a trout well and truly hooked.. As a moved on up the stream the more log jams I came across, it wasn't getting any easier at all, there was plenty of good water to be fished from one log jam to the other.

Finally I picked up another decent 440 gram brown, not long after that I picked up two more well conditioned browns in two casts. Both fish were caught close to the left side of a wide medium flowing deep stretch of water that had a bubble line on it. The little Ladybird lure was doing a great job on the trout so far with three trout being caught on it. I went over a few more hurdles before I picked up another nice brown from two hook ups before I thought it was time to call it a day.

Being on nine trout for the session I thought what the heck, try one more stretch of water to see if I could reach the double figure catch again like I did a couple days ago. I was glad I did give it a little more time because I did catch trout number ten in that stretch of water, not only that, it was the best trout of the day, a beautiful well conditioned 515 gram trout. A little over three hours of stream fishing, jumping hurdles, climbing over & around several log jams was well worth the time & effort I put into it. 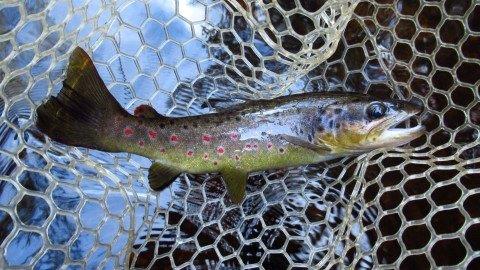 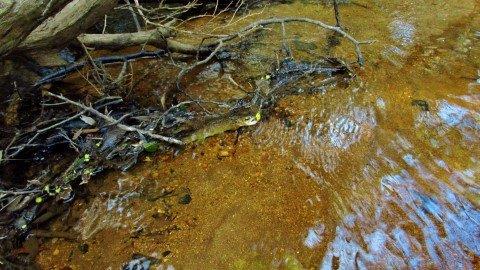 First of eleven trout for the day 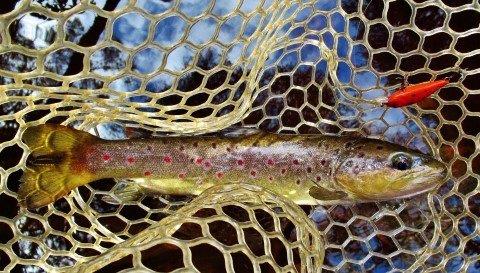 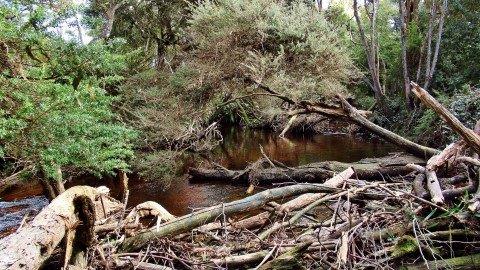 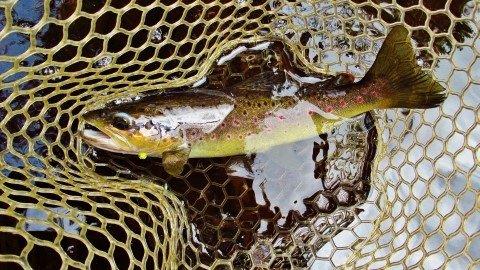