Beautiful warm (17 degrees) conditions saw me heading off for another spin session in a small stream this afternoon. This trip was one to a stretch of water I haven't fished since the 12th August so with the warmer temps I felt it was time to give it another go. The last trip this area only gave up two small browns, today I'm looking for a big improvement with the fishing. I had a twenty minute walk to where I started the spin session off and found the water was still running at a nice wading height. The water temp sitting on six degrees, a rise of three degrees which was good, three degrees doesn't sound a lot but it is when chasing trout.

I went with the Mepps #0 Aglia Fluo rainbow inline spinner for starters, because it's the lure that's being doing well in the cold tannin waters. If it doesn't fire the trout up today, then I'll make a change. There wasn't a sign of a trout in the first small run of water, it was the second & much larger run that gave up two small browns in two casts. Both trout were taken with casts to the top end of the pool with both trout taking the Aglia Fluo in quick time. It was just the start every trout fisho likes to have, it doesn't get any better than that, just hoped it would continue as the session goes on.

The following run was a little shorter & deeper than the previous water fished, here I had two hits and misses from a small brown. A little further upstream & fishing a wide shallow stretch of water, one that I thought had a nice trout holding zone on the deeper left hand side didn't give up anything. It took just on thirty minutes before I picked up my third little brown, next cast I had another trout follow the spinner for some distance before it took it. My catch had moved to four trout now which felt better because I was thinking my luck had run out. It went quiet again for another thirty minutes until I had to get out of the water and bypass a deep pool and re-enter the water a little further up.

Wasn't all that keen on the dead wooded area I had to make my way through either, it's now that time to be on the lookout for snakes. It doesn't have to be hot to have them out sunning themselves at all.. Once back in the stream I felt more at ease and continued slowly fishing my way upstream, it wasn't until I came to a nice wide knee deep stretch of water when I had a light hit and miss on the first cast into it. Two casts later I was onto a small/medium size brown, it was a nice well conditioned fish. A few casts later directly to the top end of that stretch of water I had another trout take the Aglia fluo spinner, number six was landed. I couldn't believe I was catching them in two's at this stage, not that I minded, it's better catching them in pairs every half and hour than none at all.

From then on it slowed down with just the odd trout being caught in various small stretches of water, my catch was now nine trout caught and released. The good thing was I haven't needed to change lures, just rub the little sharpening stone on treble hooks up every so often to keep them sharp. I was probably thirty meters or so from the car and about to call it a day when I thought I would just finish the spin session by fishing one more short piece of water before hopping out. It was one of my better decisions too because I picked up two more trout in four casts which took the tally to eleven trout in the end. It was my first double figure spin session for the 2019/20 trout season, one that was long over due. I was stoked that I made the decision to flick the spinner into that short piece of water, had I not the score would have been another disappointing single figure ending. 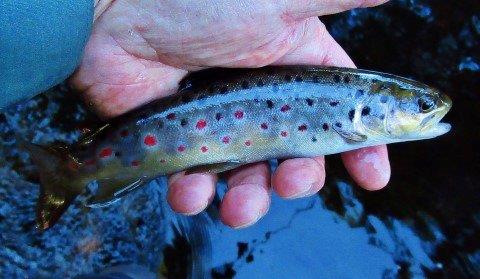 First of the session 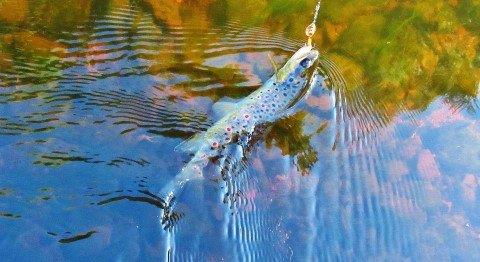 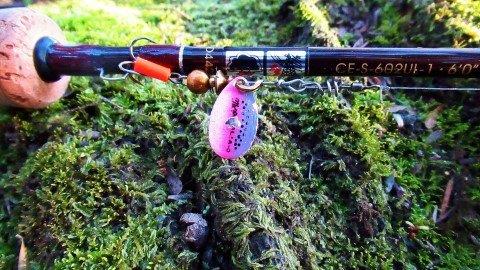 The lure that did the job well on the trout today 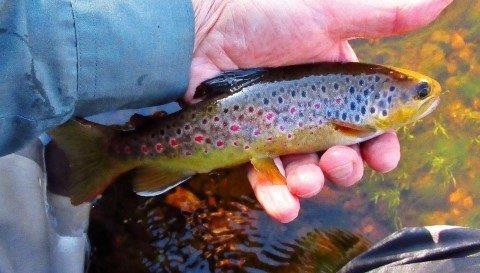 The red spots looked like theyre painted on this trout 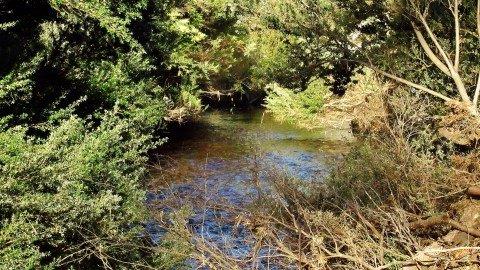 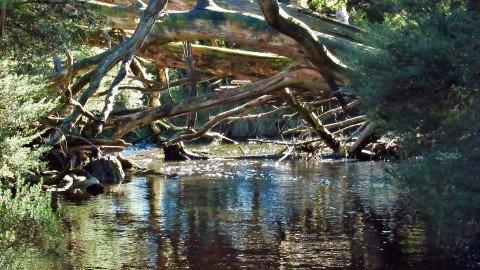