Beautiful conditions to be chasing trout

The conditions for trout fishing today couldn't have been better with a clear sky and hardly any breeze, it was a beautiful day. I had a few things to do during the morning so I couldn't get to the water until after 2:00pm, I was in it by 2:35, it was still running on the high side and a cool 3 degrees. This trip as like all my trips so far this season was to a small tannin stream, mainly because they're the only ones that are low enough to hop in for a spin session. Not only that, they're giving up a few trout where as reports from those fishing the larger rivers aren't all that flash.

I'll more than likely be hitting the larger rivers mid to late September if all goes well if and when the weather & water temps warm up. The area I fished today was one I fished several times last season but the first time this season, it's another beautiful area to fish too. I started off using a #0 Aglia Fluo brown trout inline spinner and caught my first trout on the second cast into a small well covered flat water.. It actually took me by surprise because it happened so fast, it was only a little brown that was soon put back in the water.

A few more backhand casts into the same piece of water another brown had a crack at the spinner but missed taking it proper. With two trout having a go at the lure so early into the spin session I thought I was in for a top day in the water. The following few runs were narrow tight medium flowing waters that looked really fishy. Well they weren't, all I managed was a follow from one brown trout in them. I changed over to a rainbow coloured Aglia Fluo to see if that would draw the attention of a trout and have it take the lure.

The sun was starting to get low which put more shade from the foliage on the water as well as dropping the air temp to around six degrees, that with the low water temp I was now feeling the cold. There were some lovely long medium deep stretches of water ahead which I thought would be holding a few trout. They only held the one trout, it took the spinner and spat as quick as it took it. These small streams early in the season are really tough to work out at times, they look fishy but have nothing in them. I suppose it because I'm used to them holding fish later in the season rather than early with the water being so cold. Once it warms up later in the season it will all turn around, the trout will be a lot more active in them. I stuck to casting into every bit of water where I felt a trout would be holding out, still no trout.

They just weren't in these stretches of water yet, if they were here, they sure weren't in the mood to chase the spinner. It wasn't until I came to a 90 degree bend in the river where I flicked the lure into a small flat water close to the river bank in a shallow run of fast water, it was then I finally had another trout take the spinner. This brown stayed on all the way into the net, it was 4:18pm when it was caught going by the time in the camera. It had taken quite some time to catch the second trout of the day that's for sure. My third trout was taken ten minutes later in a short medium/fast flowing stretch of water, it was picked up from a small flat water close to the left river bank just as the last trout was. With three trout caught and released from five takes I was feeling much better on how the afternoons session was panning out, just need a few more to finish it off. The air had become much cooler when the sun got lot lower and I was really feeling it. I decided I would fish two more stretches of river then call it a day.

The first one I fished was one I had caught several trout in on previous trips last season so I thought I was in with a chance of adding a few more to my catch rate. I didn't land any trout, but I did have two hits for one hook up which I lost. At the top end of that run I had a brown come at the lure, once at the lure it just mouthed it and swan along with the spinner as I retrieved it. It didn't take the full treble hooks so there wasn't a thing I could do, it held onto the spinner right up to when I had it close to me when it let go of the spinner and darted off. That was a first for me, I've never had anything like that happen with a trout before. I've had them come up behind the lure and nudge several times but never like what happened today, I suppose there's a first time for everything isn't there.

It wasn't until I fished the last stretch of water when I caught my forth trout of the afternoon, that fish was taken from a flat water under some overhanging tea trees. It was the most aggressive take of the trip by far, that trout was a medium length fish and a bit on the skinny side. My day was done, I was cold and as much as I would have liked to fish a few more runs that were ahead of me it was time to head back to the car. It was 4:45 pm when I exited the water & just on 5:15 pm when I arrived back to the car, four trout from seven hook ups wasn't all that bad. I know it won't be all that long when I'll be having catches of 12 -15 trout on some trips as the season goes on. 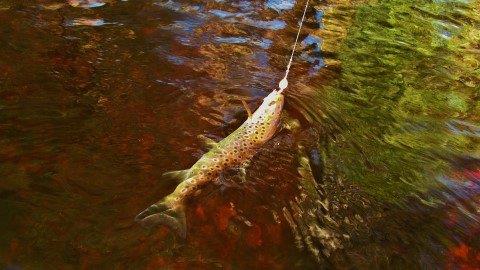 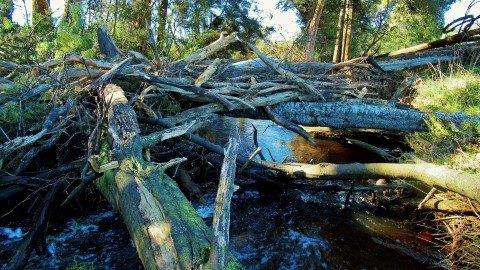 I used to fish up through here Winter flood damage 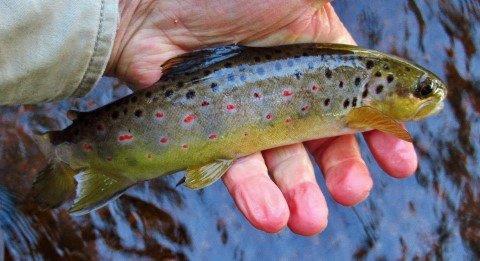 The last trout of the spin session 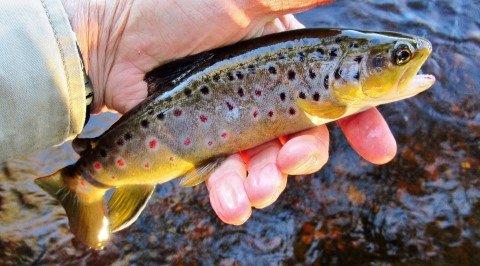