More poor weather was forecast for later in the day so I was a little undecided whether or not to head off for another spin session in a small tannin stream. At the moment I'm staying away from the larger rivers due to the lack of trout being caught in them as well as the high water levels & water temps being so low. Not only that, I really do love fishing the little tight tannin streams, even though the trout may be small it's still a challenge finding them. In the end I got my act together & headed over to the same little stream I fished back on the 12th August where I caught a couple of browns on the Mepps #0 Aglia fluo rainbow trout coloured blade.

When I arrived I spotted the land owner coming down the road so had a twenty minute chat with him before heading off to the stream. This trip I thought I would try a different stretch (approx 800 meters) of water to see if I could find a trout or two in it. To start off I had to do a little bush bashing to get to the river due to a lot of debris from Winter floods, but it wasn't all that hard to reach the water. The water level was still at a nice height and a nice medium to dark tannin colour, just perfect for wading. Once in it I did a water temperature test and found it was sitting on four degrees, two degrees warmer that the last trip which was good to see. It was 10:05 am when I hit the water and slowly started fishing my way upstream in what was a perfect morning to be in a stream, no wind & cool overcast conditions. Not only that, this new area I was fishing was so peaceful catching a few trout here would be a great reward. The first couple of runs were a mix of wide, shallow medium/fast flowing waters, I did manage a follow from a small non aggressive trout in the second run.

Having that follow I knew it wouldn't be all that long before it would be fish on, my confidence running high. It was just on 10:30 when the first trout took the spinner, a small brown that spat the lure just as I went to slip the net under it. Several minutes later & a little further upstream I was onto another trout, this one stayed on and I had the first wild brown trout of the spin session in the net. Not a large fish by any means, it was a skinny trout that looked like it needed a good feed.. Seven minutes later I was onto another brown, this one was a better size fish, one that went 320 grams and was in much better condition. After that I hooked a couple more small/medium size browns but lost both fish, those two fish weren't all that aggressive when they took they spinner.

They were very light taps at the lure on the retrieve and I had to give the rod several quick jerks to get them to take the Aglia Fluo spinner. I decided I would change lures and go to a small #00 aglia gold, another deadly trout spinner. It wasn't very long before I had a follow from a medium size brown but that's as far as it went, no sign of aggression from it. Same thing happened again in the following short stretch of water so I went back to the #Aglia fluo seeing as it was the one the trout preferred here. A cast back into the same area where I had just retrieved the Aglia gold a trout come out of nowhere and took the Fluo straight away.

Trout number three was soon in the net, changing back to the Aglia fluo was a good move. It wasn't just a matter of cast & retrieve, one still had to work the lure by continually giving the rod a light twitch to make the blade flutter to get the trout to take it. That trout was taken at 10:58, it like the last one was a nice well conditioned solid fish around the same size. It was around twenty minutes later when I had a very small trout dart out from a flat water close to the left river bank, that little brown didn't hesitate to take the spinner. With four trout caught and released I was quite happy with the decision to try this little stream again.

From here on it was the trout were few and far between with them staying hooked. I was fishing some beautiful stretches of water in which I hooked and lost a couple more trout making a total four hooked and lost for the morning. I continued fishing my way up this little stream when I came to a narrow deep stretch of water that had quite a bit of debris in it, it was a little deep but I did manage to get through it without taking a dive and filling the waders. It was worth the effort as I caught two more browns before I called it a days as the wind arrived bringing some light rain with it.

I had finished the 1-3/4 hour spin session with six trout which I was quite pleased with, could have been a much better result had I not lost five trout, but that's just one of the things one accepts when trout fishing. **PS: If you're wondering how I know the time the fish were caught it's from my camera when I video & photograph the fish capture.
Equipment used: Okuma Celilo ULS 6' 1-3kg trout rod, Okuma Helios SX20 spinning reel, Mepps lures & Platypus Super 100 mono lines. 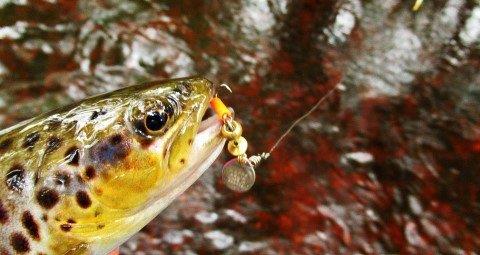 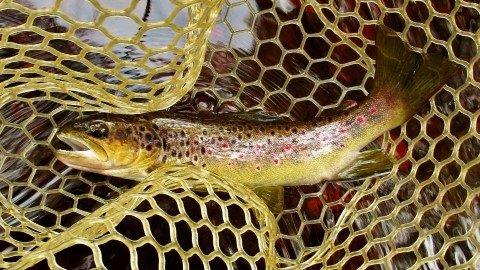 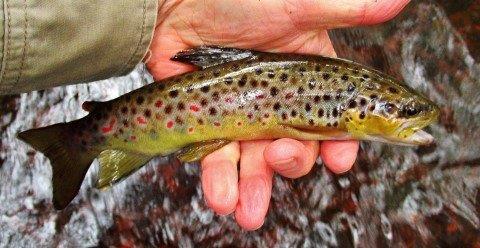 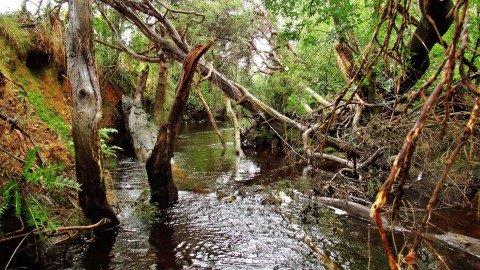 Took a chance and made my way though this