With some good rain forecast for later in the day and with it being a dull humid overcast day I thought another afternoon trip to the small tannin stream was worth a shot. I was hoping it was still at a nice depth for a spin session. Once there I could see the water level was well down, much lower than I had expected it to be so it's going to be a tough spin session. With the water being so low is going to have the trout on edge, they'll be darting every which way at the slightest sound on the river bottom.

Even the small 1.5 gram Aglia spinner lobbing on the water is enough to send them darting off. As I approached the stream a couple of trout took of in a rush, I was still on land and twenty feet from entering the water. As I started to fish my way upstream in water that was only 6'' to 8''deep at least five small browns scurried off and hid under debris or where ever they could find cover. I wondered if I should get out and head off to a larger river then thought by the time I do that I will have lost at least an hour, so decided against it. I knew there were several stretches of this stream that would be close on two feet deep and others around a foot, I knew I was still in with a chance of catching a few trout here.

Well, what happen was the trout were there and quite aggressive in hitting the little Mepps gold Aglia spinner, problem was they weren't staying hooked.

They were hitting the spinner hard and fast and taking it as they turned to dart off, they were only being lipped. I hooked and lost the first eight fish in a row which made me feel like it was like it was my first trip fishing for trout. Finally I picked up a small brown and lost a few more before hooking another small brown, then lost a couple of others after that. The day wasn't going as planned at all with so many trout being hooked and lost it was a pretty frustrating time in the stream.

I caught another two trout which took me to four for the session, the worst thing was I had also hooked and lost a total of sixteen trout too. I was ready to start screaming that's how frustrated I had become after continually hooking and losing fish. Then to top it off the rain that was forecast arrived, only light rain to start with which may have helped the fishing a little bit when I caught another two trout from four hook ups.

The last trout being the fish of the day, a beautiful dark tannin coloured fish that went 460 grams. The rain became heavier & I was getting wetter, it was time to make my way back to the car. On the way back I spotted some field mushrooms so picked up enough to make up a nice cream of mushroom soup. Like I stated early on, the very low water levels didn't make the fishing easy, had the level been 4''- 6'' higher the end result would more than likely been reversed. 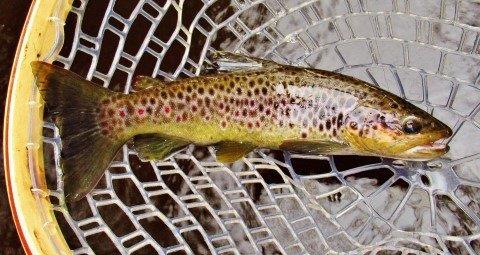 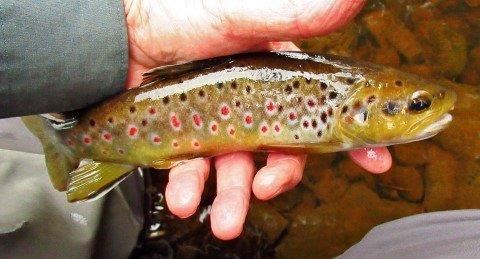 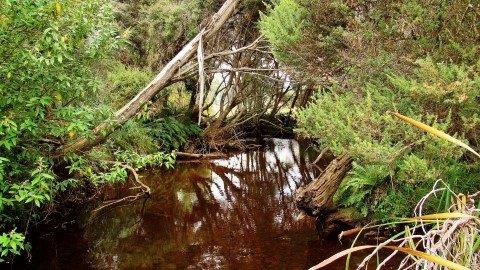 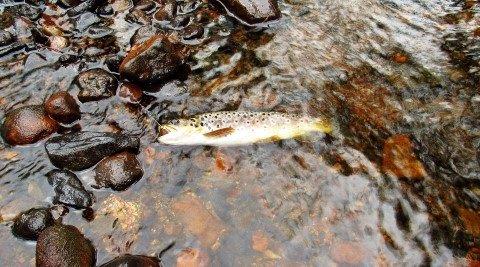