Trout and Platypus - the joys of chasing trout

I had no intentions of going fishing today, then as the day went on I couldn't help myself, I just had to go even if it was only for a couple of hours. The original reason I wasn't going is because I'm having a big spin session in the Leven River tomorrow and I didn't want to aggravate the back & hips. I had placed several heat patches on my back & hips from the time I got up in the morning and I felt fine. It was dead on 2:00pm when I hit the little tannin stream, my set up was a Okuma 6' LRF 1-3 kg rod, Okuma Ceymar C-10 reel spooled with brand new Platypus Super 100 clear 4lb mono line, the starting lure was a Mepps #00 copper Aglia spinner.

The stream was around 3-4 inches lower than my last trip here a week ago but still good enough for a spin session. It only took two casts up and across a small pool to catch the first brown trout, like most in this stream it was a small fish. The next cast was straight across to the opposite side of the pool where I had an instant hook up, two head shakes from the trout and it was gone. It was my fault that I lost the fish because I was too busy holding the camera in my right hand to film it for a short time. Both the takes from the trout were quite aggressive which was good, hope there's plenty more like it.

As I approached a wide deep pool I noticed a trout break the surface so I had a direct cast straight up the pool. As I retrieved the copper Aglia spinner a bow wave soon appeared behind the lure, that's as far as it went. The trout just followed it, I twitched the rod to make the spinner blade flutter, the trout still didn't take it. A change of lure may turn things around, I went for the #00 gold Aglia Mouche Noire mainly because of the gold blade, I just felt the gold colour may do the trick on the trout. The very next cast into the same area and with the same retrieve action the trout pounced on it, I had my second trout hooked and landed. Not long after that I picked up two more trout in the another wide deep pool, four trout from five hook ups in twenty five minutes was just the start I was hoping for. The following twenty minutes I hooked three more trout, landed two and lost one on it's second leap from the river. Good thing was that one of the two trout I hooked and landed went 515gms, a beautiful dark brown/gold coloured well conditioned male fish.

The further up I fished the shallower the stream became, the slightest movement sent trout heading in all directions in the low tannin coloured water. I continued to pick up trout on a regular basis, all small solid well conditioned aggressive fish. As I approached a narrow stretch of river that was full of debris I spotted some movement in the river which I thought was a trout. Well it wasn't a trout at all, it was a adult Platypus feeding in and around the debris. I was lucky enough to be videoing the area at the time and watched as it swam towards me, it stopped in a shallow gravelly piece of water three feet from me before moving off downstream. Seeing a Platypus is always a bonus and one of the highlights of trout fishing rivers & streams here in Tasmania.

A little further up as I was slowly making my way up a very narrow shallow stretch of water I heard a noise to the right of me. It was the sound of rocks being moved, at first I thought it may have been a freshwater lobster close to the river bank. Then I spotted it, a young Platypus had made it's way out of it's den and started fossicking around in front of it's den. I did managed to get some video footage of the young Platypus before it spotted me and darted back to safety. Seeing that young Platypus topped my day right off & I didn't care if I caught another trout. The adult Platypus I saw a little further down the stream on was more likely to have been it's mother. When I called it a day at 4:00pm I had caught and released eleven trout all up, it was another good spin session in this small stream. Unless we get some rain I doubt I'll return here again with the river getting lower as each days passes by. 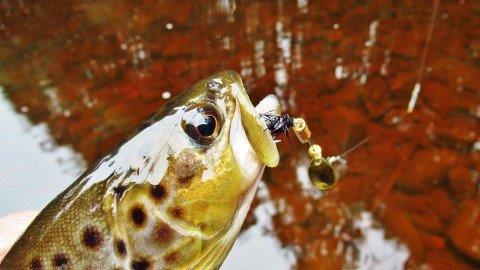 Always great to come across these little Platypus 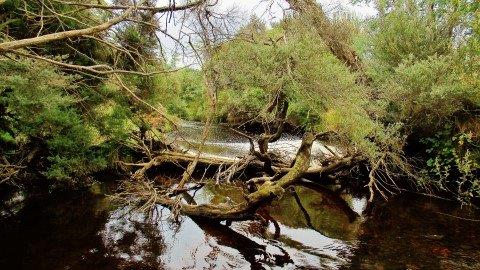 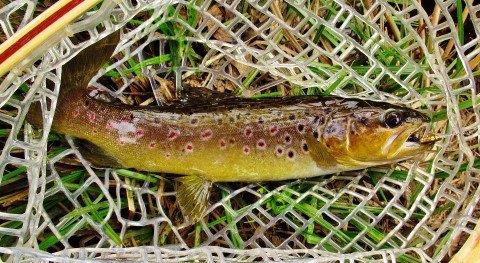 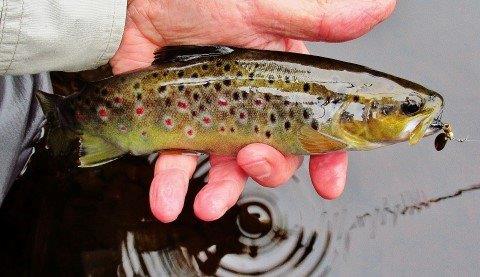