Presented from Issue 111, August 2014
If you’re anything like me, your tackle box is overflowing with various trout lures that you have hardly used. I insist on keeping them however, just in case ‘the right time’ happens. However, realistically it is pretty much the same six lures that get tied on every trout season, simply because I have the most confidence in them. This confidence has come from years of these lures constantly producing good results; it is not easy for a lure to make the cut at being one of the six. There are so many good trout lures on the market today, lures that grab your eye as soon as you walk along the lure wall, however these six lures don’t just catch fisherman, they catch trout.

A very popular lure used extensively in Tasmania and Australia, the Rapala floating lure in Brown trout colour, is a proven fish catcher. Available in sizes from 3 cm through to 13cm, this lure can be used in any trout fishing situation. I have found the smaller 3cm model deadly on small rivers and creeks when not only fished the traditional down and across technique, but cast directly up stream to the 1-2 O’clock angle and allowed to float back towards you. By just keeping the line tight enough to keep the lure submerged, with the occasional tweek, the F3 looks like injured prey and is often jumped on by the larger cannibalistic trout in the river! Often trolled in conjunction with cobra style lures, the Rapala floater will swim slightly deeper than cobras and allows anglers to cover a deeper zone. Very similar to its close relative the Rapala Countdown, the reason it pips its deeper running brother is because as its name suggests, it floats! This comes in very handy when you choose to cast and retrieve this lure amongst snags and timber. Once cast towards the bank, a steady, stop/start retrieve is very effective. When casting this lure into shallow water, keep your rod tip high on the retrieval and if you feel the lure bump the snag, a pause will allow the lure to float out of the snags and the retrieve can be continued. As you swim the lure out into deeper water, you can lower the rod tip to allow the lure to swim deeper. If casting from the shore into deeper water, the same method is used but in reverse, begin the retrieve by lowering the rod tip and begin to lift as the lure reaches shallower water. This will avoid snag ups and ensures your lure stays swimming in the zone.

After hitting the market during the re-vitalised soft plastic craze 10 years ago, the power minnow 3’’ in Pumpkinseed colour stood out as being a great fish taker, especially on Arthurs Lake. The size and colour roughly resembles many of the natural bait species upon which trout feed in our lakes. These lures are best fished on the lightest jig head that you can use whilst still being able cast it effectively. It is also important to be able to keep in contact with it as you retrieve it. Factors such as wind, depth of water and current will have an effect on how heavy a jig head you should use. The lighter you make these lures, the more natural they look in the water and the longer they take to sink – giving it more time to be eaten! Best reserved for deeper shores, they should be allowed to sink as long as possible and then jigged/hopped back.

Whilst using this lure in the Derwent River to target finicky black bream, I found it to have a welcome side effect, it was dynamite on the local trout! It has since proven to be my number one go to hard body lure for cast and retrieve fishing in our lakes. Its slim profile and action mimics a range of natural prey items and it is available in a range of natural colours. This lure suspends in freshwater and with the addition of lead tape to the underbelly of the lure, you adjust its rate of ascent back to the surface. I have found this particularly useful when fishing for sea-run trout in the lower reaches of rivers such as the Derwent, the Lune and the Henty. This lure is ideal for cast and retrieve fishing in shallow water and gradual deepening shores where it is hard to fish soft plastics. Unlike the soft plastic, once paused on the retrieve, this lure will sit perfectly balanced mid-water. It is often on this pause that it will get eaten!

The 65mm Panish isn’t cheap, but well worth the dollars spent. Both a fantastic bream and trout lure. 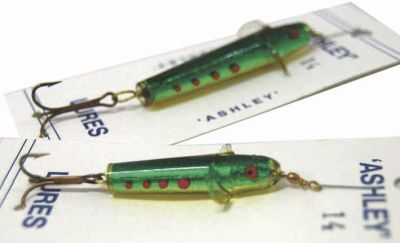 This lure has been forgotten to some degree, overlooked by flash new lures like the Panish and the T-Tail, however the humble Ashley Spinner still remains a classic trout catcher. The Ashley Spinner no.14 is a must-have lure for this coming trout season. Inexpensive and simple in design, it is very effective on any of our lakes and larger rivers. Using an anti-kink above this lure will help to eliminate tangles or twisting of the line. I have had great success with this lure when cast and retrieved along rocky, wind facing shores. The rougher the day the better for this little lure!

Shown: Ashley Spinner in Colour No. 14

The Berkley T-Tail has become a famous fish taker on waters such as Arthurs Lake, Great Lake, Lake Echo and Woods Lake. The same fishing technique used for the Power minnow can be used for the T-Tail; plenty of stop-start retrieves and lifting and dropping of the rod to impart a darting fish action. The tail on this lure provides plenty of action when slowly retrieved unlike the Power minnow. The same rule applies as the Power minnow when selecting jig heads for the Tail; go as light as possible. Try not to use a long shank in the hook either as longer shank hooks will stiffen the body of the lure and reduce its mobility. Many anglers find it hard to accept that a fish will get hooked when the hook is only covering the first 1/3rd of the lure. Have faith! The hopping, random movement of the lure gives the fish little chance but to grab the whole lure in its mouth resulting in a solid hook-up.

Available in various colours, the Black and Gold T-Tail remains a form favourite in the top six. 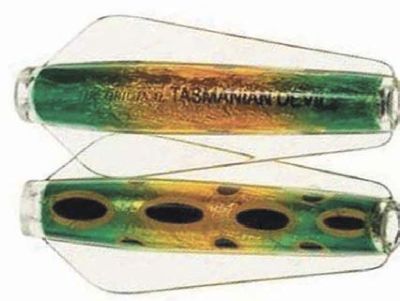 The cobra is Tasmanians’ trout angler favourite lure . It’s cheap, comes in a range of various colours and sizes and is very effective as both a trolling lure and a casting lure. Available from various manufactures including Tasmanian Devil, Loftys and Tilllins, the cobra has a unique flutter when retrieved/trolled at a steady pace. The cobra can be rigged in a few different ways, but I prefer to run this lure with a simple bead and single hook. I have found this set-up to provide better hook- up and less likely to snag. Available in several sizes, the smaller 7gram cobra is a great lure for larger rivers with the standard 13 gram size being a fantastic trolling or casting lure on the lakes.

Shown: The Tasmanian devil ‘frog’ is a must for any trout angler.