Hi folks, I had one of those last minute moments where the moons had aligned and the boss was kind. I had been given a long weekend!!! So as you do, living on the East Coast, you plan a solo trip to fish a river on the West coast for the ever elusive sea-run trout (the grass is always greener they said). This was the time of year to go as the whitebait season is in full swing and willy weather had told me that the wind was going to be calm in the afternoon of Thursday and in the morning hours of Friday. It was on.

After a solid 5 hour drive, I had driven out along the track to the informal campsite out in the dune area. The river was mirror still. It was 20 degrees@6:30pm. There was no-one around. I was almost tripping over myself to get my kayak kitted up, leaders tied, and lure selected... all whilst the trout were rising everywhere all up and down the river, some of which looked quite solid. At this point every knot seemed to take forever to tie, and every little mistake or procrastination was taking up valuable casting opportunities. We all have been there before...

I had been to the same spot last year and the sands had changed somewhat, but there was still a good long run to the river mouth. I put the kayak in. Only ten to twenty strokes into my paddle a fish rose two metres from me as i trolled a small bibbed strike pro lure...I was getting pumped up, but it was soon to be dark...I paddled on (headtorch in my backpack)... after this I had found some water that was quite deep next to a dune that had eroded into the river. This provided a good spot for the trout to push the whitebait up against the edge for a strike, and the fish were there. Two fish at any one time were thrashing around, gorging themselves on the slippery little suckers. This was a dream moment and I was pinching myself I can tell you!

I drew back a cast and fired it into the spot... BAM... a small brown had swiped my lure pretty much straight away... it fought hard all the way to my hip. Great, I had got a fish, but i was here for something better than that lil fella. Unfortunately this had spooked the action here.Time to move on. I trolled/ casted almost to the mouth and then back to the campsite with fish rising everywhere but not taking my offering... the fish seemed to be sipping bugs off the surface as I returned up river. (A little teaser for all you fluff-chucking officianados.. ;) )

The next morning after a night in the swag, I rose to the same conditions, but I knew from the reports that the wind would arrive at 10am... I promptly paddled to the mouth and stood on the bank and cast across the channel a gazillion times, changing up all different types of lures that had worked for me in other waters, but not a fish?? Hmmmn... I was puzzled and also thought that the fish had whitebait on their menu- and nothing else perhaps.

I paddled to a place where the water was eddying nicely. The breeze had already arrived which put a slight ripple on the surface. This was good cover for the fish and myself and it wasn't long before a fish rose aggressively around the eddy. I pulled out a lure that I had bought specifically for this place after last year's effort and research. It was the clincher as I cast it across some sandy undulating flats.... as I was only a third into my spinning retrieve, a big fish emerged from the dark tannin stained water and began to follow my lure across water that would only be a foot deep at most. A full rounded bow wave and crest of water was coming up behind my lure as it followed. It was only at the point where I gave my lure that extra tweak that got the trout into the striking mode and within moments I was well and truly on..... zizzzzzzzzzzzzzzz . Yeewwwww!! Heart pounding for a couple of good runs and scary "almost gotcha" moments before it fled off back into the dark waters again for another strip of my drag. Finally I got a nice trout. Not a record breaker for this water by any means, but a very nice trout none the less!

As the wind picked right up I decided to have a crack up river so I paddled up stream for a couple of hours flicking some black and gold t-tails at fishy spots, right into the structure trying all types of retrieves... but no action. Well it was an awesome paddle up there all the same.

At the end of the day I only caught a couple of fish but geez it was just good to get amongst it.

Here's a few pics of my efforts. 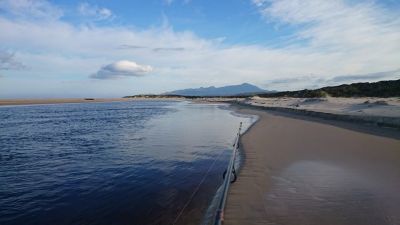 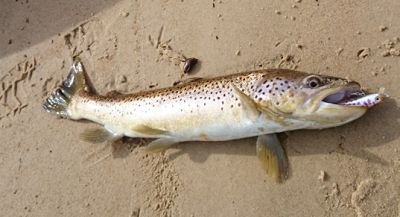