After a poor spin session in a tannin stream this morning with just one small brown trout being caught from five hookups, this afternoon I decided to give the River Leven at Gunns Plains a go. The reason I headed to this river was because it was down to a safe wading height, plus it's a river I love to fish even if it does run hot and cold with the trout. The trout can be hard to find at times and when one does come across them they can be very moody, they're either aggressive or they just sit behind the lure and tease you. Seeing as I had an angling club meeting meant it wasn't going to be a late finish, I would have to be back at the car around five thirty. It was 3:10 pm when I arrived at Gunns Plains and after a short walk it was in the river flicking a #1 Aglia Furi around in the very light tannin coloured water. It didn't take all that long before a nice medium size brown trout followed the spinner right up to where I was standing in the river. There was not a sign of aggression from it either, straight away I thought it's going to be one of those teaser days.

I stuck with the Aglia Furia for another five minutes without seeing a trout so I moved further up the river where I spotted a few trout surface feeding. Those trout were in a wide deep flowing stretch of water, one that hasn't given up too many trout when I have fished it in previous trout seasons. I gave the Aglia Furia a few more minutes in the deep water and it didn't attract the attention of a trout so I went for a change of lure. I went for an unbranded 50 mm small olive coloured hard body lure to see if that may draw the attention from a trout. The first few casts and retrieves I had several small trout follow the lure but not one of them had a go at it, a few more casts and retrieves a little further up the river a trout finally took the hard body lure. It was a solid fish too, one that made several leaps and runs in the deep water before it eventually tired and I eased it into the net. It was a nice golden coloured fish that was lined with red spots on both sides, it was a beautifully coloured fish. Five minutes later and a little further upstream I picked up another brown trout, this fish was a lot smaller than the last one. After the release of that trout and a few minutes later I was another nice brown, this one really pulled hard, I thought it was a large trout until it leaped from the river, that's when I saw it was hooked in the front fin.

It took a little longer to get this fish into the net with it being foul hooked too, I eventually got it into the net, photographed it and sent it on it's way. I came to the shallower water that I love to fish here, the first stretch is medium flowing water and it was here I had another lure change. I went for another hard body lure, this one was a home made brown trout one that a friend in South Australia sent me. I have used it before and I did catch a few trout on it when I gave it a short workout in a river last season. The right hand side of the river here has a nice narrow flat water along it and it always has a trout or two in it, that's the area I concentrated casting and retrieving the little hard body lure. It didn't take long either, on the second cast then retrieving the lure was taken hard and fast by a very nice trout.

This was the best fish of the day, it played hard to get in the flow and kept to the river bottom as much as it could before I raised it to the surface, once there I had it under control and eased it into the net. Once I released the lure from the fish I weighed it while it was in the net then deducted the net weight from the total weight, which left the fish at 460 grams. It was only a few minutes after it's release when I was onto another nice brown trout, like the previous fish was taken from that long flat water, this fish was a little smaller, it went 410 grams. I had reached the end of the flat water and started making my way into the fast flowing shallow water, it was here I replaced the little hard lure for a #0 Aglia Fluo micro pigment brown spinner. What I did here was to cast and drift the spinner, something I love doing in fast water runs as it produces a lot of hookups. Fast water fishing also results in a lot of hooked and lost fish as well, today it did with three trout lost, the upside was I hooked and landed four trout by the time I had to call it a day at 5:30 pm. With nine trout caught and released for the spin session I was quite happy with the end result today, it's one of my better ones in this river for a couple of seasons. 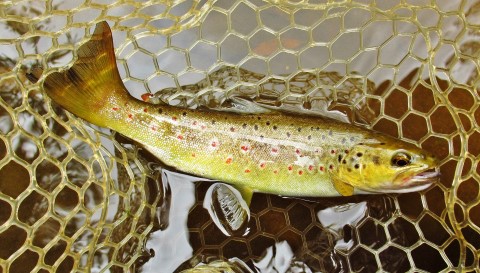 Beautiful colours in this brown trout 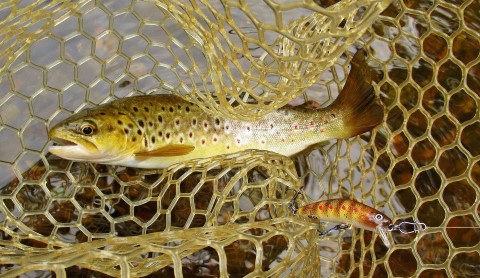 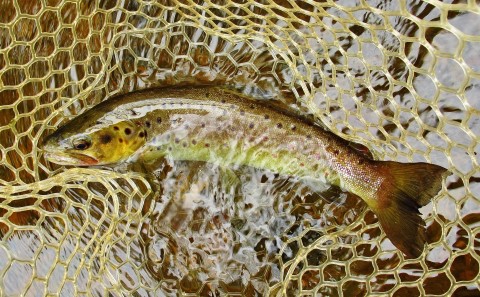 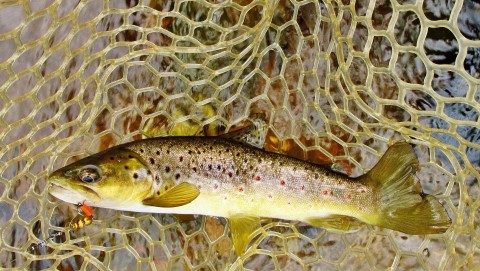 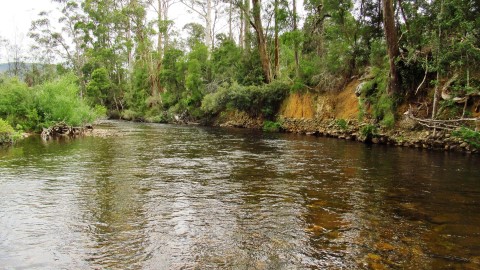 The end of the road time to go 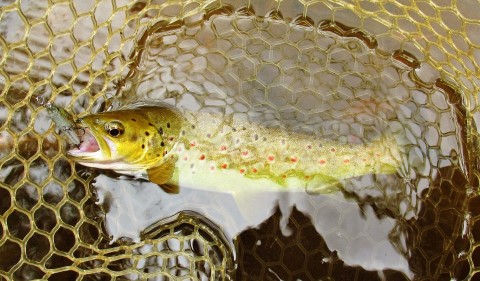 The first of several browns caught and released