Today I decided I would head on over to the Leven River seeing as I haven't given a thought to fishing it all season for one reason or another. Last season I only had the one trip here and that was early February 2017 after we had 20 mms of rain, that day I caught & released 10 browns and 1 rainbow. Since we had some good rains a week or so ago I checked the river levels and it had a reasonable flow of water in it so I felt it's worth a shot. I'm well over due for a good bag of fish so I was hoping this may be the day as I new exactly the stretch of river I'll be fishing too. It's fished well before for me and I'm reasonably confident it will do so today. The hardest thing will be the choice of lure to use, the gold & copper Aglias & Black Fury spinners have worked well here before, so have the f3 Rapala rainbow & brown trout hard body lures.

I arrived at the river at 8:45 am to find there it was running a few inches higher that I preferred it to be, but it's still safe enough to wade my way upstream. The water was a pretty dark tannin colour so I chose to start the session off with the rainbow Rapala. When I hopped in the river I immediately felt the cold through my waders, that's even with the thermals on as well. I started fishing a long wide & reasonably deep stretch of water that I could fish from one side of the river, even then it was waist high. The river bottom was still as rocky as ever & also very slippery under foot, the spiked felt soles on my wading boots weren't getting a grip on them. Not only that the rocks kept moving and rolling with each step I took making it tough to stay upright several times.

Any way I fished my way up this long one hundred & fifty meter stretch of water while changing lures several times because I hadn't had a hit or follow from a trout.. It wasn't until I had reached the fast water that was running knee deep it was here I went for the gold Aglia spinner to do a bit of cast and drifting to see if that may attract a trout. It did draw the attention of a nice brown but not enough to get it to take it. It was time to try something different, so out with the small tackle boxes to see what else I had tucked away in them that may work in the tannin water. I needed something a little brighter that will get them stimulated into taking the lure. I found a small Strike Pro Smelta 5 cm lure in a rainbow patten that I had bought a couple of seasons ago and have yet to use it. It was a nice slim bright shiny little light weight suspending lure that looked like it would stand out in the dark water. Well, it only took a couple of casts with this lure to catch my first trout of the morning.

It was a solid 520 gram brown that fought like hell in the fast water while doing a few crocodile rolls at the same time. I don't like it when they roll because the line can wrap around the head area which results in the line getting tangled up with the treble hooks. After a short time it tired and I had it in the net. It was well hooked & the line was tangled with the trebles hooks too, it was untangled & released back into the river no worse for wear... Once I had released the fish I held the lure and gave the main line a solid jerk to test the line for any weak spots. The line parted around four inches above the lure which goes to show one must always do this test if a when a trout wraps the line around the lure. I do this test after every second or third decent size trout that I catch too because you never know if there's a weak spot when using very fine four pound mono line. Better to snip a few inches of line off than lose a nice size trout and a good trout lure. Catching that trout was the start of what turned out to be a pretty good session on the river and not long after catching that brown I had a very large brown come up behind the Smelta lure and have a couple of goes at it but missed taking the lure, it moved off not to be seen again.

It was one hell of a fish and would have been close to two kilos at least. Over the following five hundred meters I caught and released another ten lovely browns from eleven hook ups as well as having several hit & misses. That little Smelta lure was doing a great job on the browns and there were so solid fish amongst them too with the best of those going 610 gms. There were plenty of other that went above the 520 gram mark too, only three were just under 400 grams. I had reached another very long wide slow flowing water so I decided to head back to the car and try another fast water spot a kilometer further upstream that I liked to fish when I fish here more often than I have over the past few seasons... After a five minute drive and a bit of bush bashing I was back in the river flicking the little Strike Pro lure around and it wasn't all that long before I had my twelfth trout on and in the net. This was just the start I wanted and I'm hoping it will continue as I work my way upstream.

A little further up the river a had another brown take the lure and it took several leaps from the fast water and did a few of those crocodile rolls that I hate. Then it happened, jut as I went for my landing net the line went loose, the fish was gone and so was my little trout catching lure. The line had been cut by one of the treble hooks when the line had got in the gap of the barb on the treble hook. What made it worse was that it was trout number thirteen that it happened with and that was the only Strike Pro lure I had as well. So it was back into looking through the little tackle boxes where I found a Gaga Goon perch hard body lure that had quite a bit if silver in it. That little lure did an excellent job too in catching not only trout number thirteen, but also another four after that one from five hook ups. My session came to a sudden end when a thunder storm came from no where, heavy rain and lightning sent me packing off back to the car at 2:15 pm.. With seventeen trout being caught it was one of my best days in a river for quite some time and the first time I've been back in double figures since the 29th March this year when I caught eleven trout.. 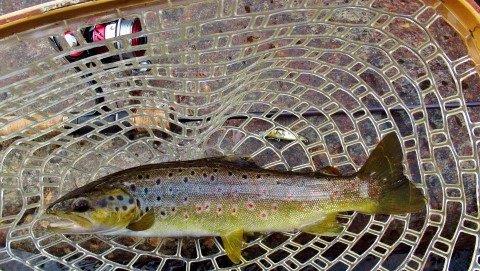 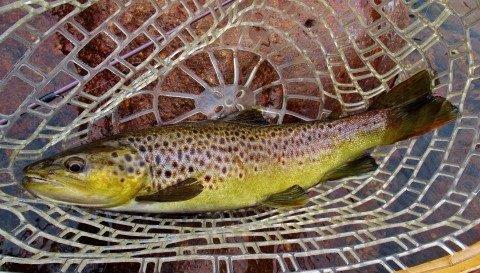 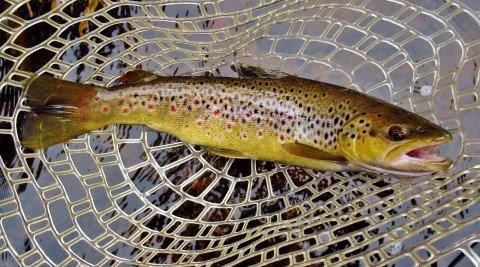 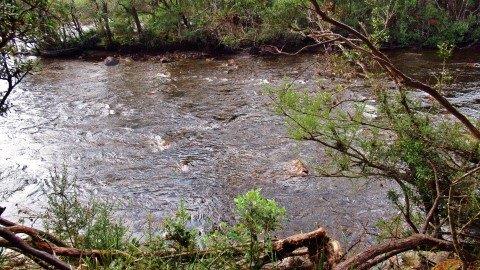 Good flow in the river 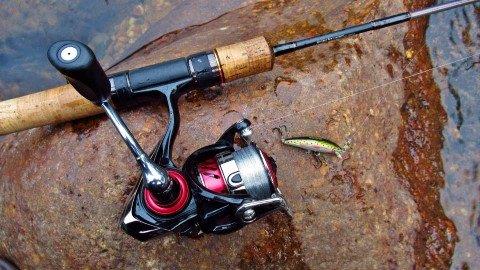