Well it was an earlier start on the river today than yesterday, this time I was back in the water by 10:00 am. Yesterday it was sunny and windy whereas today it's very dull with low cloud and a cool South Westerly breeze. I prefer it like this too with no sun on the water, it gets the trout out and about more often than not. Stuck with the same set up that I finished with yesterday and the session started off very quiet. Not a sign of a fish over the first three hundred meters at all. Where the hell have they gone I said to myself, they were every where yesterday.

Still can't worry about it, just continue to work my way upstream as I'm sure I'll pick up one sooner or later. I came to a large fallen tree across the river that had a nice pocket of water under it and with a back hand cast into it I was soon onto my first trout of the morning. This was a solid fish too and one that was in a fighting mood as it fought hard all the way into the net. This female trout went 540 grams and was in excellent condition.

It was all quiet again over the next one hundred meters before I picked up my second brown of the morning, this one was on the Rapala rainbow patten that I changed over too five minutes earlier. Ahead of me was quite a lot of scrubby area that was near impossible to get through with tea trees covering the stream from one side to the other. Not feeling like getting on my hands and knees to get through it I hopped out and walked for some two hundred meters where I found a clearing with some open water to fish.

The first stretch was a shallow 20 cm deep piece of water and it was here the Rapala picked up three browns one after the other. I couldn't believe it, three browns in this small shallow water and to catch them one after another was great. This was the start of what was to be a great end to the brown trout season. I went on to catch another two browns on the Rapala until a well hooked brown wrapped it around a snag and broke me off. I changed to a small Rapala X- Rap in a brown trout pattern. That little thin hard body did a good job too in catching three more browns from seven hook ups. All the browns caught and released so far have been in top condition and the colour of them, well they were just a beautiful rich golden brown.

Not real happy with the X-Rap losing more trout than it caught I changed over to a copper #00 Aglia spinner. This little lure was soon taken by a trout, then another and another, the more water I headed into that little spinner was taken hard & fast in no time at all. The trout are full on the attack for now and I'm loving every bit of it. With most fish going between 400 grams and 540 grams it's just full on enjoyment. Bow wave after bow wave on every retrieve and a hook up each time, it couldn't be better. Finally it was time to call it a day, as much as I wanted to fish on my lower back, left hip & groin were killing me so the session had finally come to an end.

The little #00 copper Aglia did a great job in finishing off the day by catching another ten browns from thirteen hook ups and many hit and misses. The last day of the brown trout season certainly ended on a high that's for sure.. The 2016/17 trout season was one that went a lot better than I had thought it would after the record floods and the damage to the rivers of last June. I was thinking doom and gloom for the season ahead but it wasn't to be as it turned out. The trout weren't as large in the Mersey & Meander Rivers but they were there in numbers which was good to see, though I did manage to catch several in the 600 gram to 1.3 kg range.

I finished the season with 646 trout (of which only 8 were kept) which I am pretty happy with, something I didn't think I would achieve this season. It my seventh highest total in the 17 seasons of trout fishing since moving to Tasmania back in March 2000. Also put my Korkers wading boots into retirement after three years of river fishing they did their job well. Over the three years they went on 279 trips and covered around 980 kms.

First brown on the last day of trout season 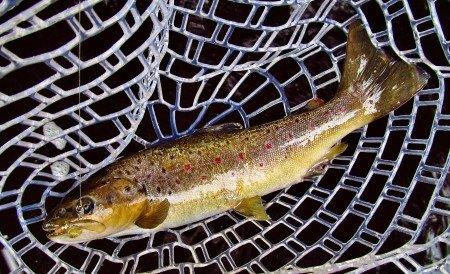 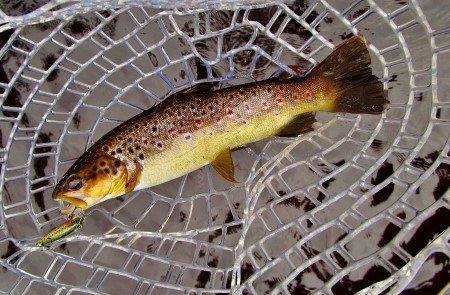 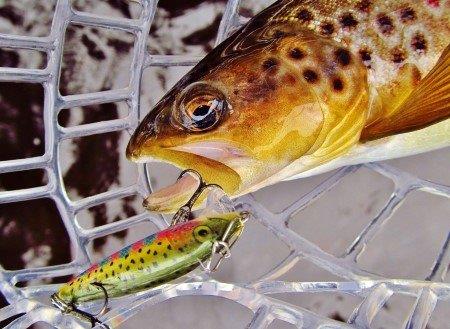 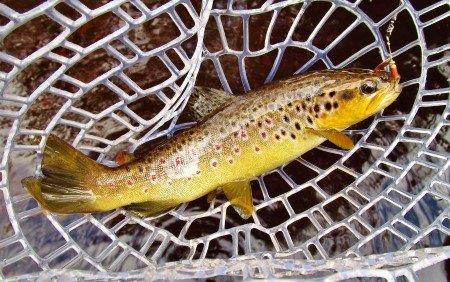 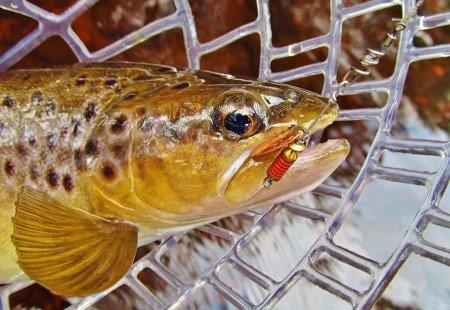 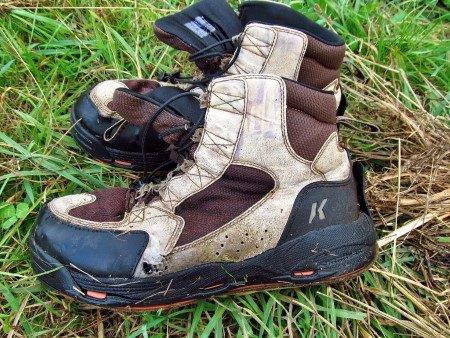