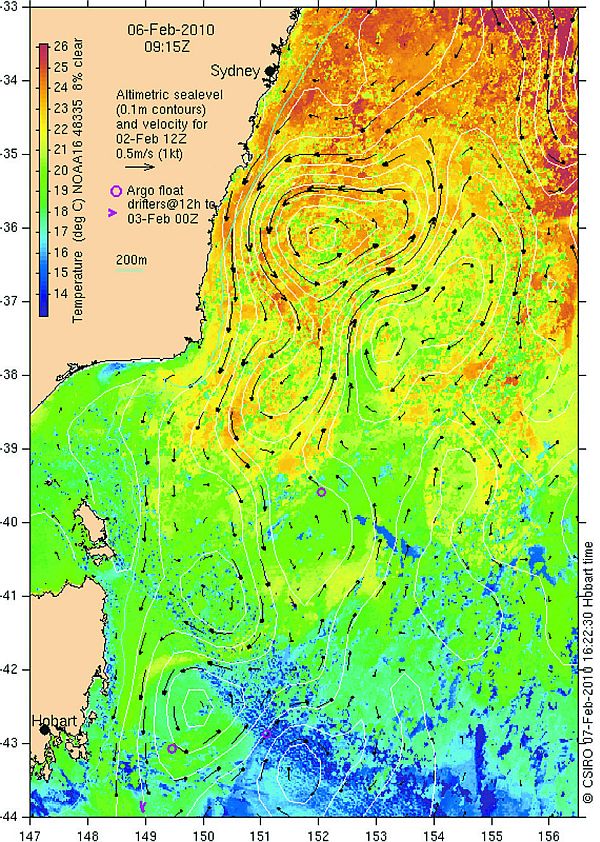 by Craig Macaulay
Tasmania’s east coast is recording its highest-ever winter water temperatures of more than 13ºC  – up to 1.5ºC above normal – due to a strengthening of an ocean current originating north of Australia.
Satellites have given oceanographers an insight into a remarkable phenomenon – a significant extension of the Leeuwin Current curling around the southern tip of Tasmania and reaching as far north as St Helens.

Remote sensing specialists at CSIRO's Wealth from Oceans Flagship have been observing the current in recent days using satellite data, and ocean measurements made near Maria Island on Tasmania’s east coast.
CSIRO oceanographers Katy Hill, David Griffin and George Cresswell study ocean behaviour in the Australian region. Dr Cresswell says that scientists use ocean observations from satellite, ocean instruments and research vessels – such as the Marine National Facility, RV Southern Surveyor – to track the currents but there are also other indicators such as tropical species reaching Tasmania.
“It’s important for us to monitor these changes in the ocean, as they can have consequences for marine ecosystems, fisheries, aquaculture, coastal communities and more,” Dr Cresswell says.
The Leeuwin Current forms north of Australia and flows right around the western half of the country, meeting its better known cousin, the East Australian Current (EAC), at Tasmania. The exact location of this meeting point varies both seasonally and from year-to-year, depending on how strongly each current is flowing.
Oceanographers believe the EAC has gradually been getting stronger, and the Leeuwin Current weaker. Changes in the EAC are among the most significant in the global ocean, with a continuous record of monthly measurements one of Australian oceanography’s most valuable indicators for climate and environmental monitoring.
Observations of temperature, salinity and nutrients have been collected monthly just east of Maria Island since 1944, showing how the influence of both the EAC and Leeuwin Current systems varies in Tasmanian waters. As part of the Integrated Marine Observing System (IMOS), a National Reference Station mooring has been deployed at the same site, and data is now available online every 10 minutes. Monthly samples are taken by boat to measure nutrients, phytoplankton, and zooplankton (biomass and species composition).
Satellite images indicate the surface water temperature over the continental shelf current is around 13 degrees, a degree or two warmer than at this time in recent years. The EAC has been a research focus for Katy Hill since 2005 as part of her PhD in the Quantitiative Marine Science program – a joint initiative of CSIRO and the University of Tasmania.
The St Helens-based Chief Executive of the Tasmanian Rock Lobster Association, Rodney Treloggen, said he was not aware of any reports of Indian Ocean species but he said fishers were concerned at what he described as a “bad year” for the industry in the south-east and east coast.
"We know the warmer waters have an impact but we're not sure how much," Mr Treloggen said.
Craig Macaulay CSIRO