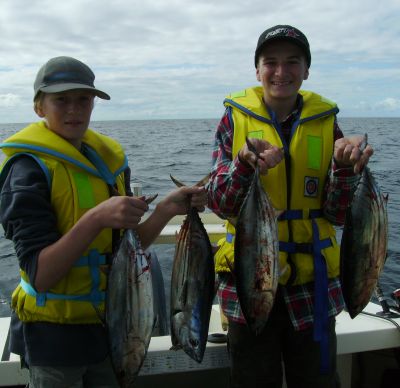 Not every kid gets the chance to go out to the Continental Shelf off Bicheno, but luckily enough my brother and I had the opportunity to. Mick, our next door neighbour invited us out for a day trip tuna fishing out at the Continental shelf. We would be taken out in his 5.2m Shark Cat.

Connor was so excited at the chance to go tuna fishing (as he is mad about it) was wide eyed at 3:30am instead of waking at 5am.  We arrived at Bicheno at 6:20am, filling the boat up with fuel, and then heading to the boat ramp near the fish factory. We were the first ones at the ramp, and it wasn’t long before more boaters arrived.
We were out on the water at around 20 to 7, seeing a few penguins on the way. We cast out, two tuna surface lures and one diving one. We were out on the water for a while, and then all of a sudden, the reel screamed! Mick stopped the boat and I started winding. It was easy winding until the tuna saw the boat then he went down deep, peeling off more line, fighting the fish for 3 or so minutes until I got it back to the boat. It was only a baby one, 55cm, around 8lb, but it was my first tuna! We trolled around for over an hour, but not another one hit the line.
At around 12.5/13 nautical miles from Bicheno at the shelf, my brother Connor got his first tuna, around the same size as mine, another stripy tuna, great stuff we thought, we are on to them. But we kept on trolling and trolling getting nothing, so it was decided to pull up stakes to do some flat heading.
As we were heading back, we spotted a school of tuna busting up on the surface. We threw out the lures and trawled circles out around them. I ended up catching another one, around the same size. As we weren’t getting as many bites as we were hoping, Mick suggested that we swap the tuna lures and rods for silver lures on our flathead spinning rods. I caught two more tuna doing this and Connor one, it was awesome fun, seeing all of these tuna following your lure, and then one takes it and runs. Best lot of fishing fun I have had in ages!  Oh and how can I forget the blue ringed octopus Connor caught too! As Mick was cleaning the tuna whilst we were still fishing, this greedy albatross came down and ate a whole carcass; he then had it stuck in his throat, talk about not chewing you food before swallowing it!
After a while of having some tuna excitement, we decided to try flat heading again. We were using Yep Tassie tackle Pearl white, flappers and fork tales. We only caught 3 flathead but it was getting late in the afternoon and it was time to head back in to the boat ramp.
Back at the boat ramp, there was a school of cocky salmon; we couldn’t catch them, only some wrasse!                                                                                                                                                           Connor sung out that he had a stingray on, Mick and I were expecting a small skate, but no, not Connor, if there is something different to be caught, Connor will catch it. It was a huge stingray that would have been able to fit easily across the bonnet of the Hilux! Thankfully it got off. He would have been bragging for weeks if he landed that in.
Any way, it was an absolute awesome day, for our first trip out to the Continental Shelf we felt very privileged to have been taken out by Mick, as some people fish the ocean all their lives and don’t get that chance. A day we will defiantly remember- Thanks once again Mick.
Samuel Evans, Kalangadoo- Lake Leake. 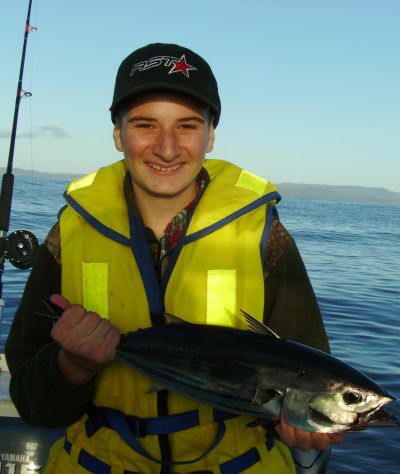