Right now, recreational fishers are out in their tens of thousands around Tasmania, supporting small communities and businesses with their purchases. Our ability to have a positive impact on regional and remote communities that have been doing in tough in 2020 should not be underestimated. Someone recently said to me that recreational fishers don’t generate “new money” into Tasmania like the commercial sector does when it exports fish. That is largely true but it’s not the full picture. Each fishing sector plays an important economic role in Tasmania. As recreational fishers, our role is to circulate money throughout Tasmania. By fishing in coastal and regional communities, we are like veins – we pump money from the city centres of Tasmania out into the regions. Of Tasmania’s 29 Local Council Areas, 20 touch Tasmania’s coast line and with over 100,000 Tasmanians fishing every year our ability to support those communities through the simple act of going fishing is real.

As the Government continues to develop it’s 10-Year Recreational Fishing Strategy, TARFish continues to advocate for you with particular focus on: protected access arrangements to key species, infrastructure investment that makes it easier for people to go fishing, and funding for the long-term. We are seeking fair and protected outcomes for recreational fishers and to be fully recognised for the role we play in supporting Tasmania’s economy and its place in Tasmania’s way of life.

The strength of that advocacy comes from you, our members and I warmly welcome the hundreds of new members that have joined us in recent weeks. As the Government-recognised peak body, the Government will listen to our views but how hard they listen and how they respond is up to all of us. The more members we have, the harder we are to ignore. A single and united voice is a compelling one for Governments. As we approach both a state and federal election in the coming months it is important that we work together and throughout February TARFish will be visiting communities around Tasmania to meet with recreational fishers. Dates and locations will be available from our website by the end of the week and we’ll promote them on our Facebook page. I encourage all recreational fishers to come along and share their views on what a positive recreational fishing future looks like and how we can get there. Your views will shape the ongoing development of TARFish’s position on the things that matter most to recreational fishers and how we can work for you to deliver results. 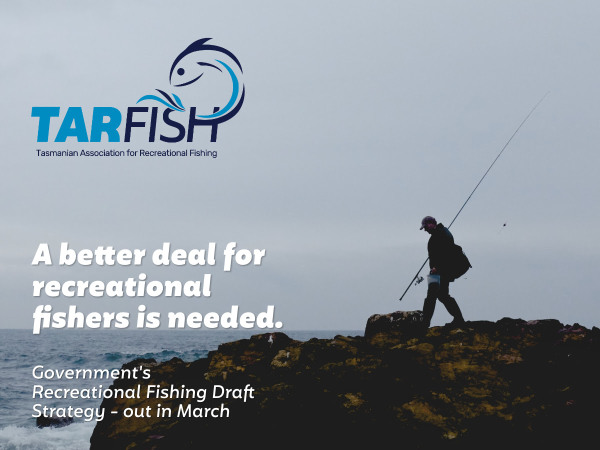 The TARFish submission to the Government’s Discussion Paper that is helping shape the 10-Year Strategy, recommended three key initiatives that should form the basis for moving toward Harvest Strategies for key species.

We also recommended that they develop a “decision-support tool” to help develop harvest strategies. What that means, is that the Government puts together a range of guiding principles and scientific sustainability, environmental and social measures to help them determine the “right” settings for a specific fishery.

As your Peak Body we back your right to access fisheries safely, sustainably and for the long-term.

You can read the full TARFish submission here. 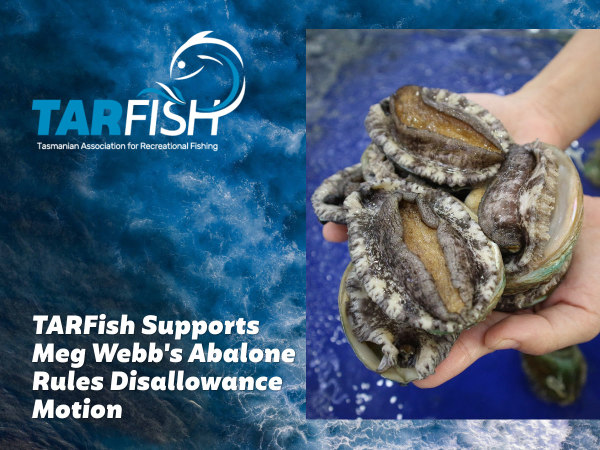 We haven’t forgotten about the Proposed Amendments to the Abalone Fishery Management Plan Amendments – have you?

TARFish does NOT support the amendments.

It is TARFish’s view that a better approach would be to undertake a comprehensive review and from that, develop a formal resource sharing management plan, similar to that for Rock Lobster.

TARFish will not support decision making that effectively denies fair and reasonable access for recreational fishers.

So where is it at right now?

Parliament doesn’t resume until the first week of March so the disallowance motion can’t happen before then. We’re keeping in contact with Meg Webb and there’s more to come on this. We’ll keep you posted! 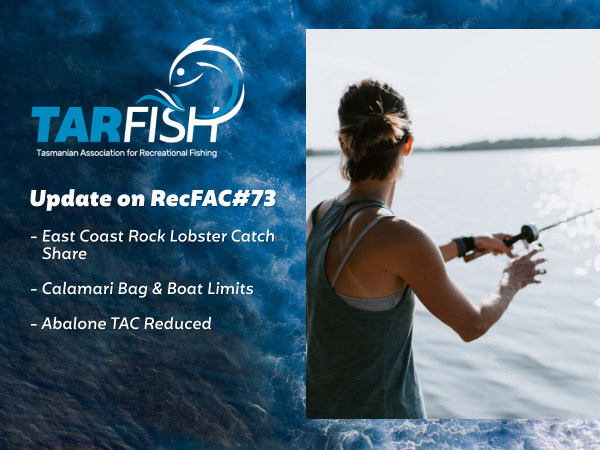 RecFAC meetings usually have a big agenda and plenty of ground to cover and the December RecFAC (#73) was no different. Below is a summary of the top 3 topics – rock lobster, calamari and abalone.

Rock Lobster
We didn’t hold back when it came to discussion on East Coast Rock Lobster and we thought it important to re-state our view for all recreational fishers to understand our resolute position on this.

Until recreational fishers have received a clear commitment by the Minister to protect fair and reasonable access to the ECSRZ, specifically 50% of the TAC or 80 tonnes (whichever is the greater), that no recommendation could or should be developed (by RecFAC).

It is our view, that TARFish and RecFAC have a responsibility to represent the interests of recreational fishers and despite numerous recommendations to move to a 50/50 split, a rebalance of the ECSRZ allocation has been ignored.

The current allocation of 21/79 disproportionately affects recreational fishers and we cannot continue to accept this manifestly unfair approach to decision making.

Calamari
RecFAC also discussed calamari and recommended leaving the bag limit at 10 but introducing a boat limit of 30.

Abalone
Abalone was also on the agenda - TARFish supported a reduction of the abalone TAC to 833 tonnes (185.5 t reduction) because it was based on the science provided by IMAS. We, TARFish, are still concerned about the abalone fishery and we requested a progress update on the implementation of the new size limits to improve recruitment and overall fishery sustainability at the next RecFAC meeting. 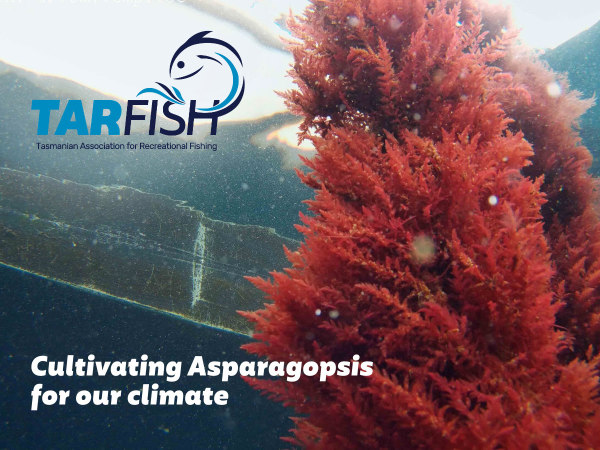 TARFish was asked to consider and comment on a permit application from Sea Forest Pty Ltd to harvest up to 10 tonnes of Asparagopsis seaweed in Tasmania as part of a research project.

Over 5 years of scientific testing has found that Asparagopsis as an additive to animal feed reduces methane emissions by 99%. To put this in perspective, if all livestock had just 2% of their feed supplemented, it would have a greater impact on global emissions than removing the entire transport industry.

We think the project has very exciting potential to positively impact global emissions and we supported the application to harvest by dive for the initial 10-tonne research project.

Whilst we support wild-harvest for this initial research project, TARFish do not support long-term wild harvest and we encourage land-based production as technology and scientific understanding allows.

We’ve encouraged the proponent to maintain contact with TARFish and provide updates on the project so we can keep recreational fishers up to date.

TARFish is the official peak body and your representative recreational fishing organisation.