We catch and stock migrating elver and lampreys from two Hydro Tasmania catchments:

1) Meadowbank Dam in the River Derwent

The lamprey run at Meadowbank Dam started in October and peaked in December. Overall we caught 2 414 kg of lamprey for the 2018-19 season.

In November, we began to catch elver using nets set in the Trevallyn Tailrace and in December from a trap at the base of Meadowbank Dam. By 6 February we had caught 1 308 kg of elver across both sites.

We completed all environmental stockings, Commercial Freshwater Fishing Licence (CFFL) holders received their industry elver allocations of 50 kg per licence and 180 kg of surplus elver were sold to Victoria. 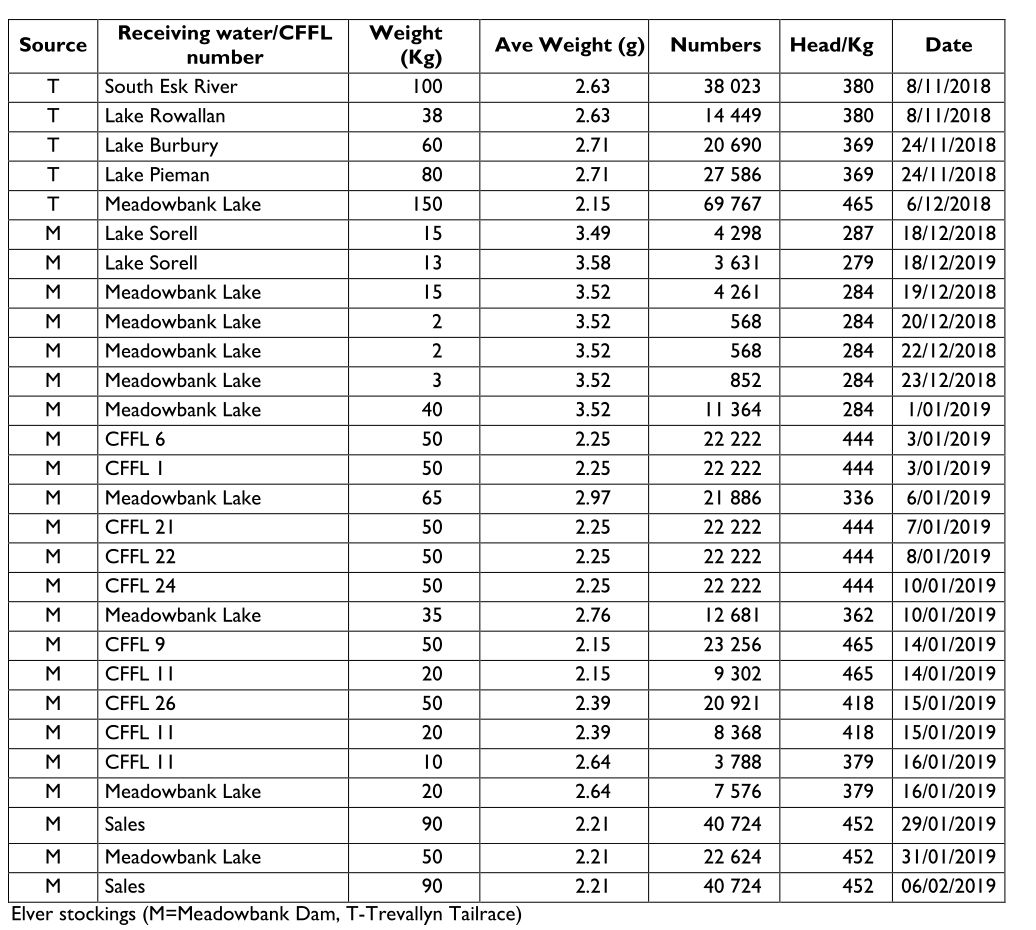 The rising water temperatures and high lake levels in December resulted in ideal environmental conditions for catching carp. Carp respond to these cues, which trigger the fish to push into shallow marsh edges looking for spawning sites.

This reflects the decreasing number of carp in Lake Sorell. Gillnet effort peaked in December in response to ideal weather conditions and increased carp movement.

Juvenile recruitment surveys started in December and will continue each month until March. The surveys involve intensive backpack-electrofishing in the high-risk marsh areas; Kermodes, Silver Plains, and Robertsons. We survey the areas from the marsh fringe to the lake edge. Importantly, we have found no evidence of spawning or juvenile carp; this is a great result for the Carp Management Program.

At the start of 2019, the carp catch rates dropped with only five carp caught in January and one in February. We now estimate that less than 20 carp remain. By the end of February, all fishing nets, traps, and set gear was removed.

Heading into next spring, the chance of carp spawning is much lower as few carp remain and those left are stunted in size and maturity and half the males are affected by the “jelly-like” gonad condition potentially rendering them sterile.