In accordance with the Tasmanian Inland Recreational Fishery Management Plan 2018-28, two fishery assessments have been identified for 2018-19, Woods Lake and Bronte Lagoon. We also plan to undertake a follow up survey of Shannon Lagoon following the release of 500- tagged fish in June 2017.

Angler surveys We conduct the annual Angler Postal Survey (APS) to get measurable information on recreational fishery each year. We mail a written questionnaire at the end of the season to a sample of licence holders.

There is a summary of the top ten rivers and top ten lakes and lagoons below. A full report of the Angler Postal Survey (APS) results for the 2017-18 will be published on the IFS website during September 2018. 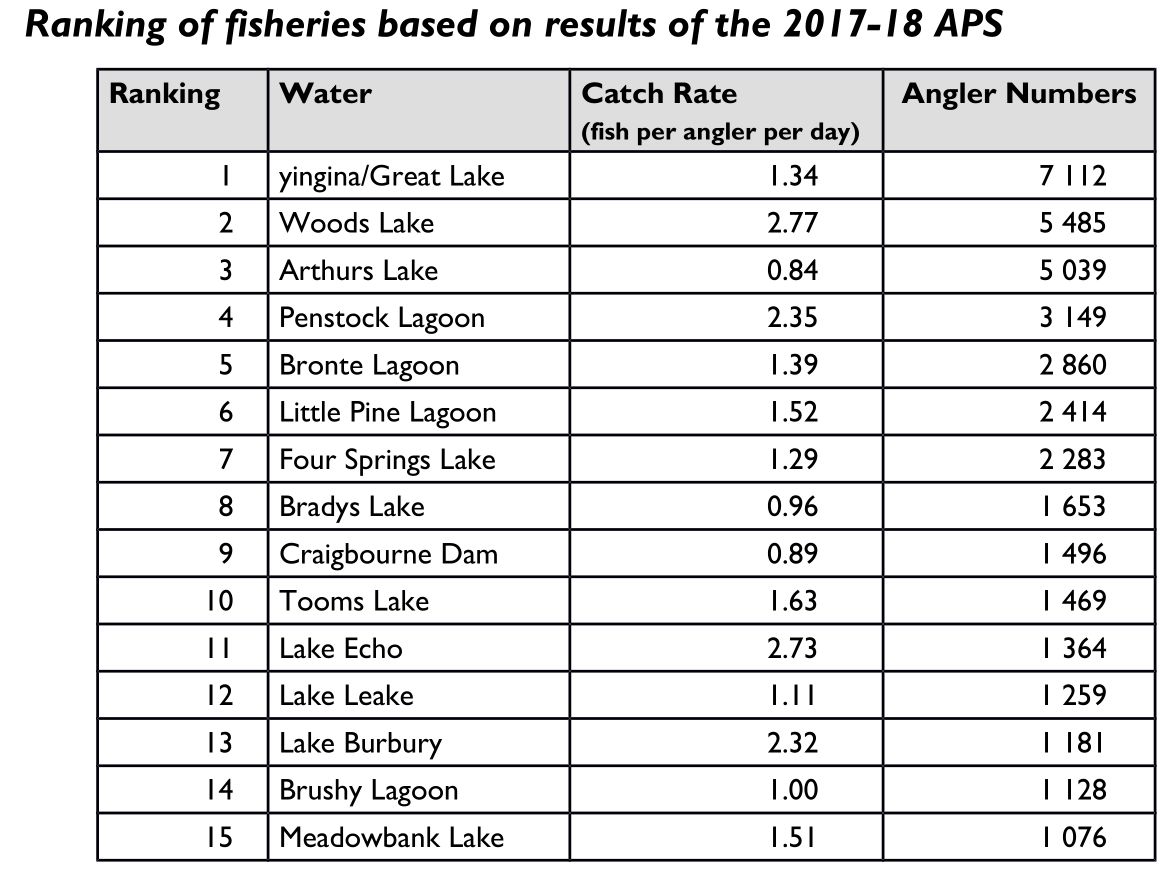 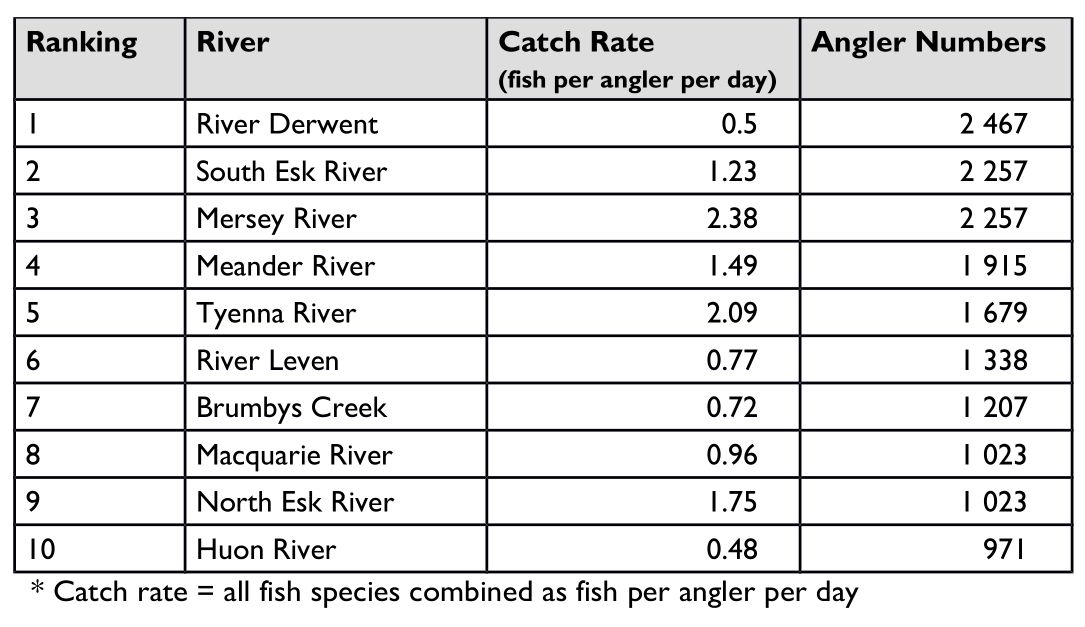 Ranking of fisheries based on results of the 2017-18 APS

During the spawning run, we sampled the fish from the traps at yingina/Great Lake, Arthurs Lake and River Derwent above Lake King William. We do this to get the average weight and length of the brown trout.

The average length and weight of the fish at yingina/Great Lake decreased for 2018 compared with 2017. The average weight of brown trout at Liawenee Canal fell by 157 grams and at Sandbanks Creek, the weight fell by 86 grams. At Arthurs Lake, the number of fish in the traps over 400 mm in length increased from 43% in 2017 to 62% in 2018. We continued to release all fish over 400 mm above the traps to spawn. The River Derwent trap above Lake King William showed an increase of in average weight by 87 grams and an increase in average length of 35 mm.

From the Liawenee Canal (yingina/Great Lake) fish trap we transferred over 13 000 wild adult brown trout. From Sandbanks Creek, (also yingina/Great Lake), 1 554. From the River Derwent (Lake King William) we transferred just over 9 000. Most of these we stocked in to the Bradys Chain of lakes. From the three fish traps on Arthurs Lake we trapped 8 606 wild adult brown trout but transferred only 1 416 fish. All fish over 400 mm were released above the trap to continue on their spawning migration.

Rainbow trout stockings started on the 26 June 2018 with 12 785 stocked into the public fisheries.

Throughout the winter period, maintenance was done at Lake Sorell ready for the peak carp spawning season (October to February). This involved checking and repairing the 14 kilometres of barrier netting used to stop carp from getting into their wetland spawning sites. Gillnet was also repaired in anticipation of warming waters and rain events. A shipment of 60 new trammel nets were ordered from the UK, which will be due to arrive in September. Fishing effort was maintained on a small scale, and was dependant on weather conditions. The two remaining transmitter fish remained spread across the lake, sitting in the same locations for weeks at a time. Gill nets were set in a range of spots, targeting both tracker fish as well as rocky reef structures in deep water (2m +). Two carp were caught, one in a non-targeted gill net set over a rocky reef, and another which was caught while targeting a transmitter fish. In mid-July, Jonah Yick, IFS Leader of the

Tasmanian Carp Management Program attended a workshop in Canberra. The workshop was part of a larger project under the National Carp Control Plan (NCCP). At the workshop there were specialists from all over the country including:

-> researchers of small and large fish,

-> amphibian (frogs and toads) researchers, and

The workshop discussed how different levels of carp reduction from mainland waterways might affect the surrounding ecosystem. It also talked about water quality, system modelling, risk analysis, and economics.

Hopefully, the outcome of the workshop will assist the NCCP to: -> plan an integrated approach to controlling carp in Australia’s waterways, -> understand and manage the risks involved with the removal of carp, -> quantify the benefit/cost analysis of the project, and -> inform stakeholder engagement. For more information about the National Carp Control Plan, see http://www.carp.gov.au/

The following amendments were made for the 2018-19 angling season:

-> changes to the interpretation section of the regulations to support the application of daily bag limits, define waters reserved for juvenile anglers and update species nomenclature; -> amended wording so minimum size limits are specifically applied to inland and excepted waters;

-> a 220 mm minimum size limit for “salmon” for all rivers and wild and over populated fisheries;

-> a 300 mm minimum size limit for “salmon” for lakes generally;

-> removal of the specific size limit reference for brown trout for yingina/Great Lake;

-> a daily bag limit of two “salmon” that are greater than 500 mm in length for specific waters as listed under the new Schedule 6 of the regulations;

-> a daily bag limit of one “salmon” that is greater than 500 mm in length for Bruisers Lagoon, Camerons Lagoon, Lake Crescent, Penstock Lagoon and any Junior Angling Development fishery;

-> a separate daily bag limit of 12 fish for either “salmon” or blackfish;

-> a specific daily bag limit of two “salmon” while fishing in a junior angling development fishery;

-> a specific daily bag limit of five “salmon” for any river;

-> a daily bag limit of two brook trout or five Atlantic salmon for all inland waters;

-> new bag limit regulations to be applied the same as current bag limits, i.e. to allow anglers to continue to fish once the daily bag limit has been reached, provided all subsequent fish are returned;

-> amended fishing methods to allow anglers to use bait while fishing at Huntsman Lake;

-> a new schedule inserted (Schedule 2) that prescribes waters reserved for juvenile angling and redefines the age of a juvenile angler as a person under 18 years of age;

-> an update to Schedule 4 – Infringement Notice Offences, to include current amendments;

-> an update to Schedule 5 – Bag Limits, to include new waters and changes to new bag limits;

-> minor administrative matters amended relating to: correcting nomenclature, removing obsolete references and updating matters primarily relating to the issuing of infringement notices and updating the numbering of specific regulations; and Page 25 of 31

-> moved the seasonal boundary on the River Leven to Whisky Creek and the River Derwent to New Norfolk Bridge, to provide for an extension of all year round waters on these rivers. Amendments were made to the Inland Fisheries (Commercial Net and Fees) Regulations 2009:

-> renamed as the Inland Fisheries (General) Regulations 2009; and

-> added a Schedule 2 – Infringement Notice Offences and Penalties, allowing an infringement notice to be issued for prescribed offences under the Inland Fisheries Act 1995.

Regulations are reviewed every 10 years. This ensures that legislation made is effective, efficient and necessary and that, in cases where it imposes a cost or burden on the Tasmanian community, it is justified as being in the public interest. It is also ensures outdated or inappropriate subordinate legislation is not kept indefinitely.

The IFS will soon begin reviewing these two regulations. For the recreational fishery, this should be a straightforward process, as we have recently reviewed our regulations for the trout fishery under the Tasmanian Inland Recreational Fishery Management Plan 2018-28. For the commercial freshwater fishery and associated industries, it is envisaged that some significant changes may be required to meet the contemporary management of activities. Interested stakeholders will be able to offer comment on this legislation when a Regulatory Impact Statement is released for public comment mid-2019.

The IFS is also reviewing the Seaward Limits Order that defines the boundaries between Inland and State (marine) waters. We hope to complete this by the start of the 2019-20 angling season.

Following up intelligence leads was critical to the success of joint operations during the year. With Tasmania Police, we carried out operations to enforce whitebait regulations on waters in the North West, successfully laying charges for fisheries and non-fisheries offences. The cooperation benefited all enforcement agencies involved, and the operations led to the conviction of nine defendants for 34 whitebait and related offences, with fines of $26 394. Seven further defendants are pending appearance in the Magistrates Court on 33 charges.

-> Five vehicles and one vessel searched.

-> Nine defendants convicted of 34 offences in the Magistrates Court with seven further defendants listed for appearance on 33 charges.

-> Peter Morris SALTER of Montagu was convicted on 20/8/18 in the Burnie Magistrates Court of 3 counts of inducing another person to commit an offence under the Inland Fisheries Act 1995. The charges relate to his part in transporting Brodie Lee POPOWSKI to the Montague River so he could illegally fish for whitebait. The Defendant was fined $700 and court costs of Page 27 of 31 $83.74. These offences will appear in the 2018/19 ‘Prosecution Offences’ table, on the next occasion.

-> Paul Charles BAKES OF Hampshire was convicted on 20/8/18 in the Burnie Magistrates Court of 6 counts of take protected fish, 9 counts of possess freshwater crayfish and 1 count of take trout without a licence. Information from the public resulted in a joint operation between IFS Fisheries Officers and Marine Police at Stanley. Mr Bakes admitted the offences and was charged. The complaint outlined the Defendant illegally hunted, caught and ate the highly protected and threatened species from November 2013 to November 2017. The Defendant was fined $8550 and court costs of $66.36. These offences will appear in the 2018/19 ‘Prosecution Offences’ table, on the next occasion. Club events, meetings and dinners June 2018 -> Southern Tasmanian Licenced Anglers Association annual general meeting and dinner -> Longford Anglers annual dinner July 2018 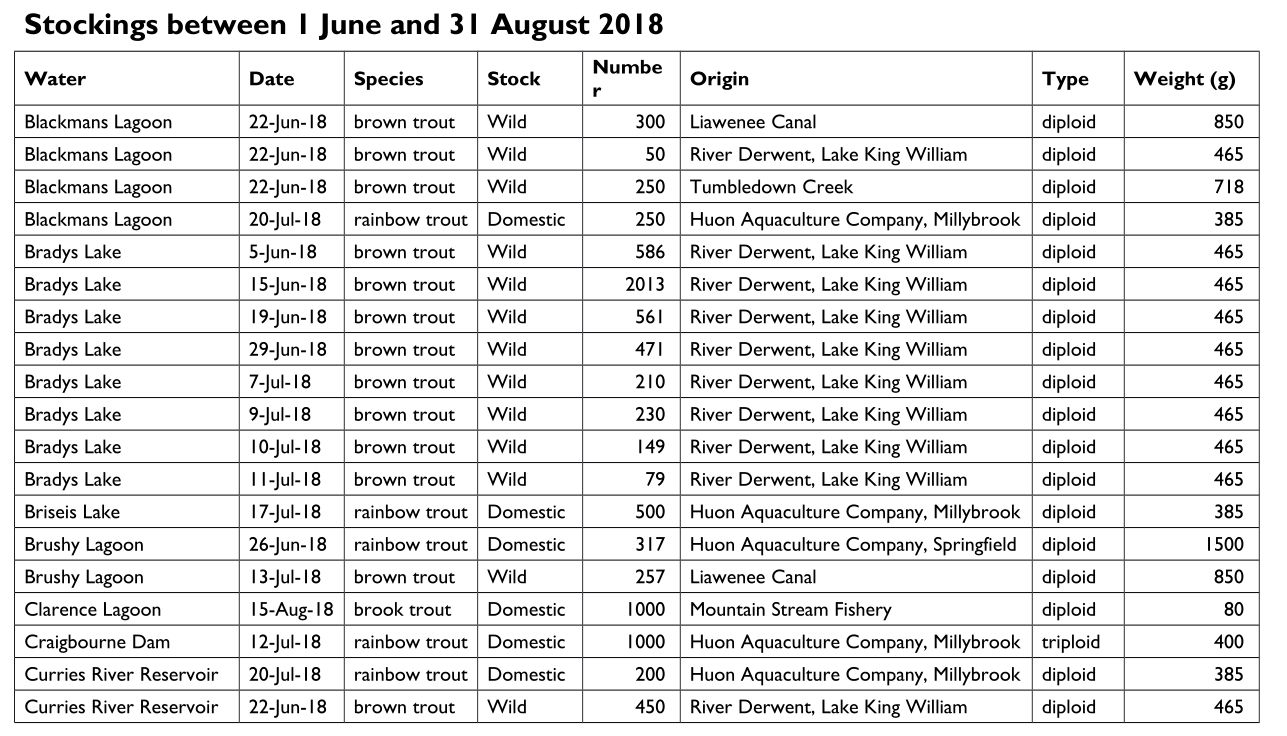 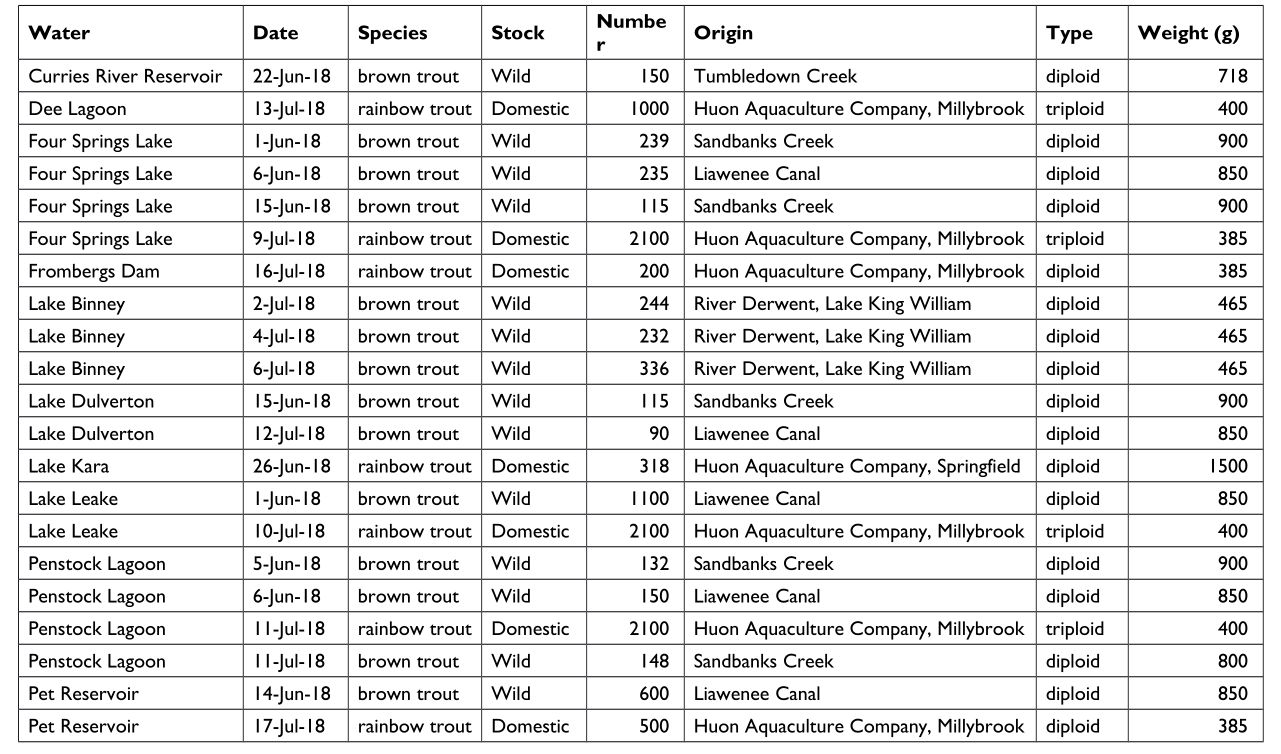