During 23-25 July 2018, the Service undertook a trapping survey within South Riana Dam. The purpose of the survey was to gain information on:.

Before the survey, to help estimate the population, 400 adult brown trout, sourced from the Liawenee Canal spawning trap were adipose fin clipped and transferred to South Riana Dam. These fish weighed an average of 850 grams.

During the survey, 54 box traps were set over two nights with 115 brown trout captured. This equals 2.13 brown trout per trap. This indicates moderate to low abundance of brown trout. We examined the brown trout for the presence of an adipose fin clip with just two clipped fish captured. One individual freshwater crayfish (Astacopsis gouldi) was also captured.

The catch of 115 brown trout consisted of 77 females and 38 males, with no immature fish recored. There was a significant difference in the average weight and length of male to female fish.

Males weighed an average of 1 328 grams with an average length of 499 mm. Females, 847 grams and 420 mm. This difference was largely driven by the high percentage (34%) of male fish greater than 500 mm (see figure 1). In comprison, only 4 percent of females were greater than 500 mm. The average condtion factor for both males and female fish was not significantly different, although fish over 500 mm generally showed signs of poor conditon.

A comparison of length against weight (see figure 1) indicates the fishery has plateaued, with typical lake-fish growth rates apparent. The group of fish greater than 500 mm are the remnants of the original population from the inundated farms dams. These fish are now reaching old age with several fish over 600 mm in length. Fish under 500 mm generally displayed consistent growth with the rate of growth marginally slower than similar lake fisheries. 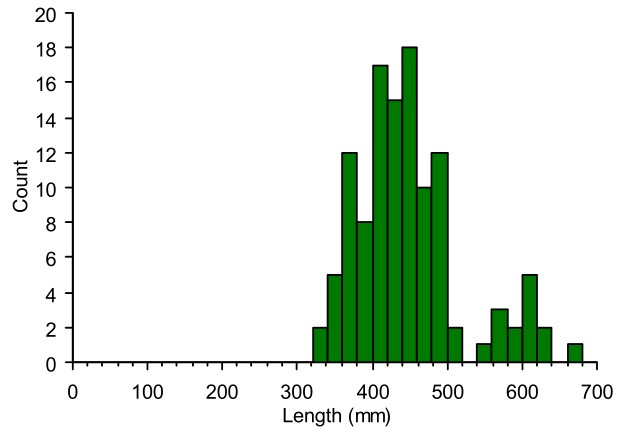 A plot of length frequencies (see figure 2) shows a number of fish 340–420 mm that likely represent the fry stocked during 2015 now forming a single cohort of 3-year-old fish. Fish between 420–500 mm may be from a population of river fish before flooding, and/or a stocking from November 2016 of 200 gram fish. There is no evidence of the 2017 fingerling stocking that should have shown up as fish of approximately 220 + mm. Smaller fish (less than 180 mm) are typically not captured in box traps and are absent in the length frequency data.

There is no evidence of any 1 + or 2 + year old fish from natural recruitment.

The results of the 2018 survey indicate South Riana Dam has small to moderate brown trout population. The capture – mark – recapture population survey was not precise due to the low number of fin clipped fish released and the low number of total captures. Nonetheless, the low catch effort of 2.13 fish per trap indicates a low to moderate population size. Given the results of this fishery assessment, it is apparent that South Riana Dam has already passed through the initial period of higher productivity normally associated with a newly formed water. The decline in the condition of fish over 500 mm is an indicator that larger/older fish are unable to sustain their weight. The growth of fish under 500 mm was within the lower bounds for a typical Tasmanian lake fishery. The reasons for slightly slower growth is likely linked to the significant drawdowns in lake level for seasonal irrigation. This has limited the establishment and growth of both submerged and emergent macrophytes.