During 23-25 July 2018, we undertook a trapping survey within the Pet Reservoir.
The purpose of the survey was to gain information on:

Before to the survey, to help estimate the population, 600 adult brown trout, from the Liawenee Canal spawning trap, were adipose fin clipped and transferred to Pet Reservoir. These fish weighed an average of 850 grams.

During the survey, 46 box traps were set over two nights with 29 brown trout and three rainbow trout captured. This equals 0.63 brown trout per trap. It suggests low numbers brown trout.
Catch effort for rainbow trout was negligible with just three fish captured at 0.07 fish per trap. We examined the brown trout for the presence of an adipose fin clip. We captured three clipped fish. Three native blackfish (Gadopsis marmoratus) were also captured.

The catch of 29 brown trout consisted of 17 females, 8 males and 4 immature fish. Males weighed an average of 996 grams with an average length of 450 mm. This compared to females at 768 grams and 428 mm (see table 1). The average condition factor of 1.0 k is, by comparison to most lake fisheries, slightly lower than typical, although the majority of brown trout sampled were in post spawning condition. 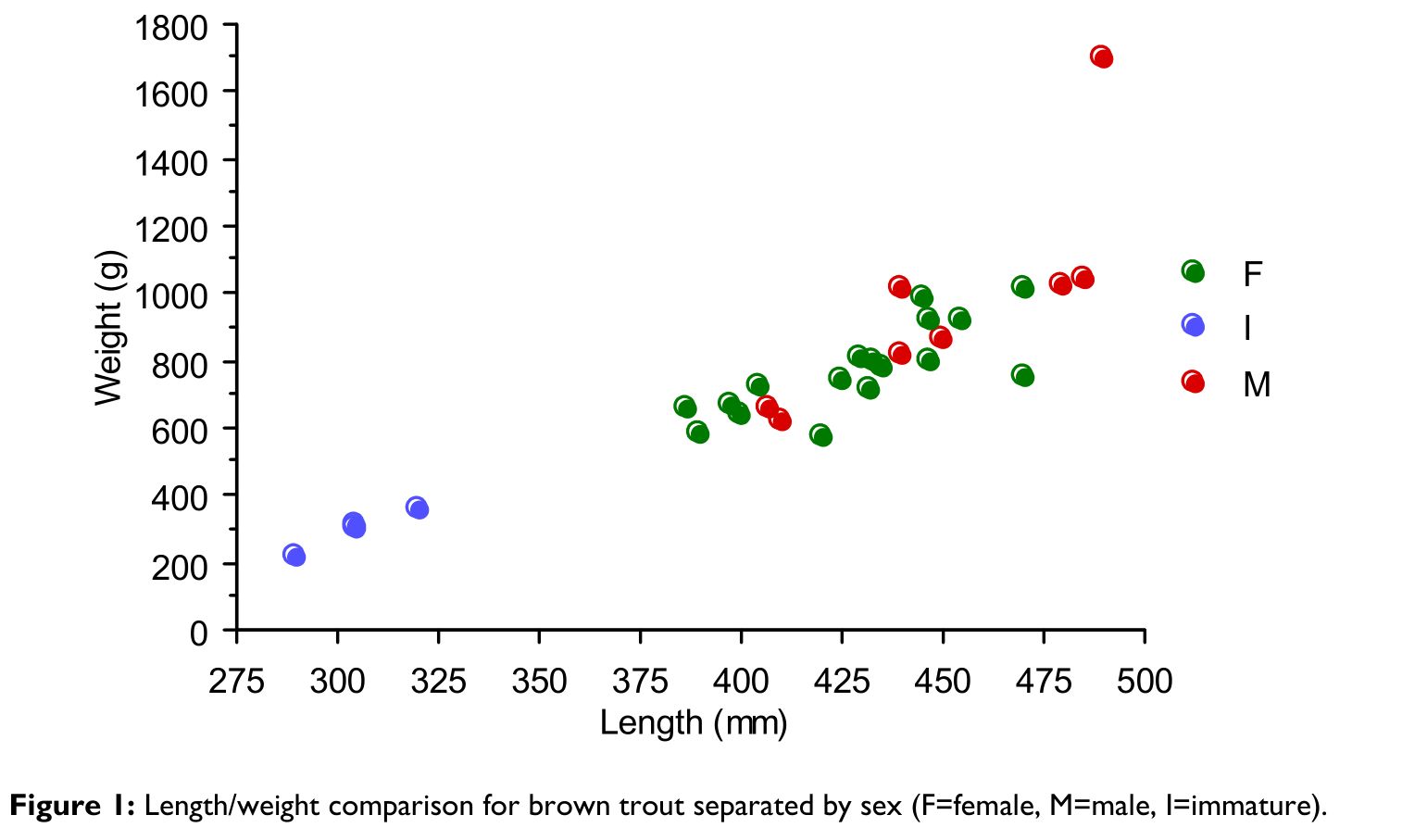 A comparison of length against weight (see figure 1) indicates that the growth of fish is typical of lower productive lake fishery. A larger sample size is needed to make an objective assessment. 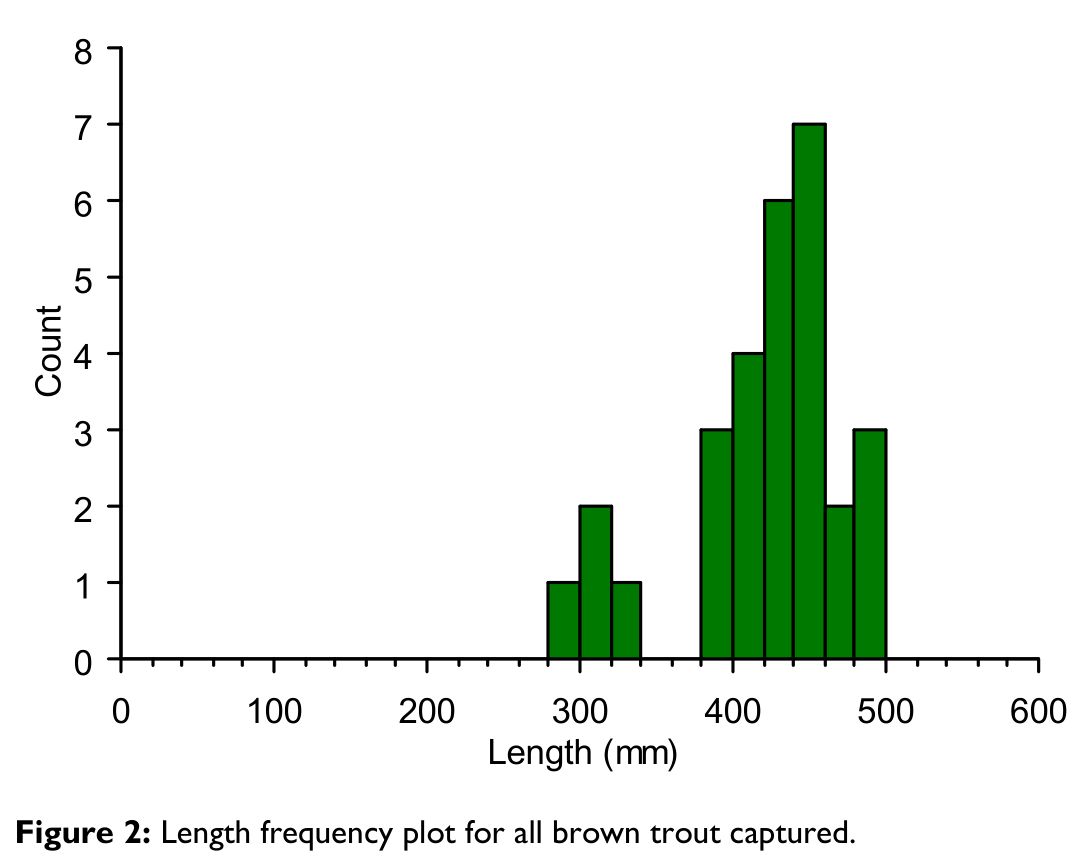 A plot of fish length (see figure 2) clearly shows two groups of brown trout. The first of these, 280-340 mm, are representative of three-year-old fish. The second group, 380-500 mm, possibly contains a range of fish from a combination of adult brown transfers (2015 and 2017), natural recruitment pre 2015 and a stocking of 10 000 fry in 2013. It is not possible to differentiate any of these sources. It is evident that natural recruitment is low. 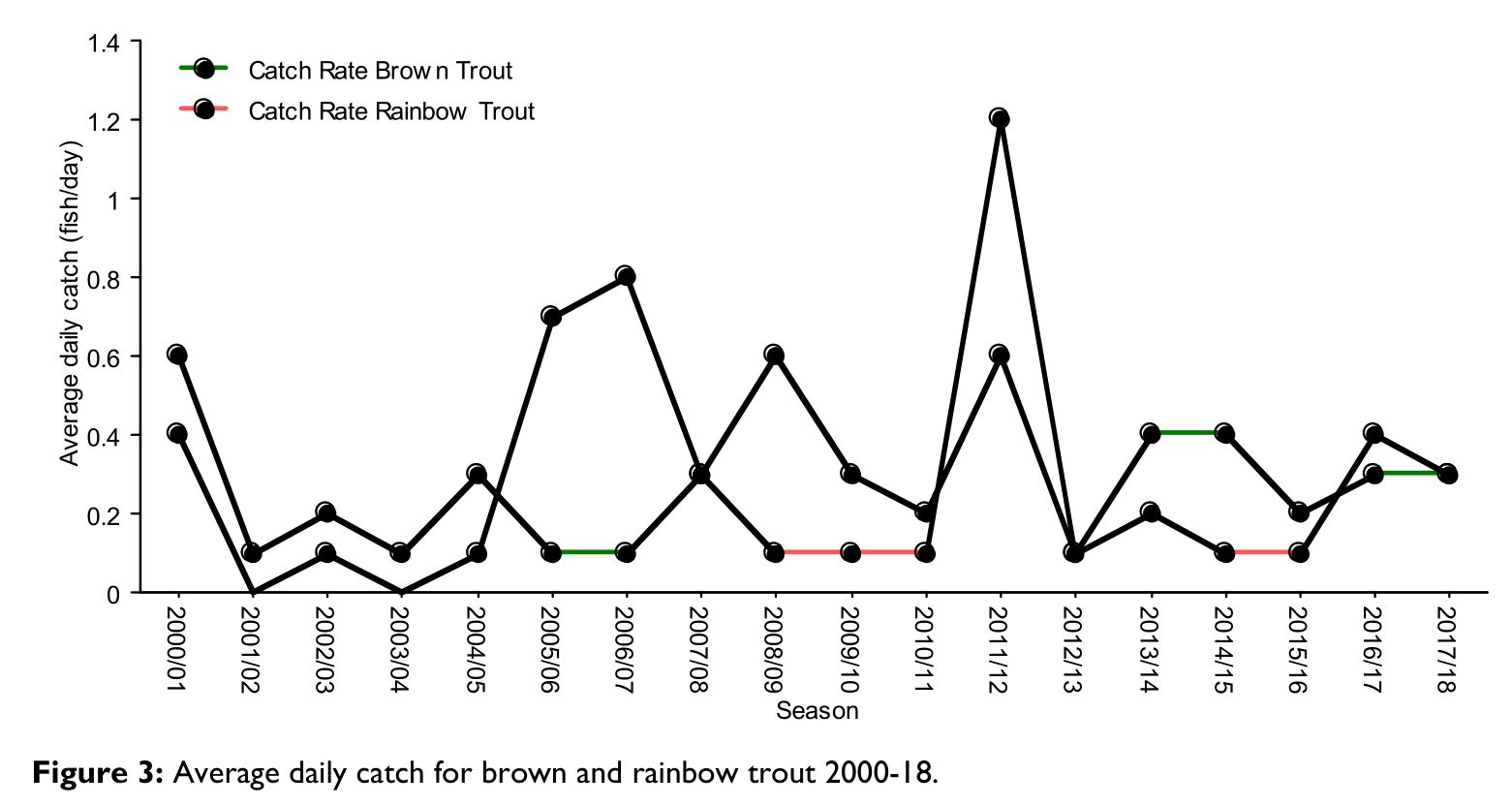 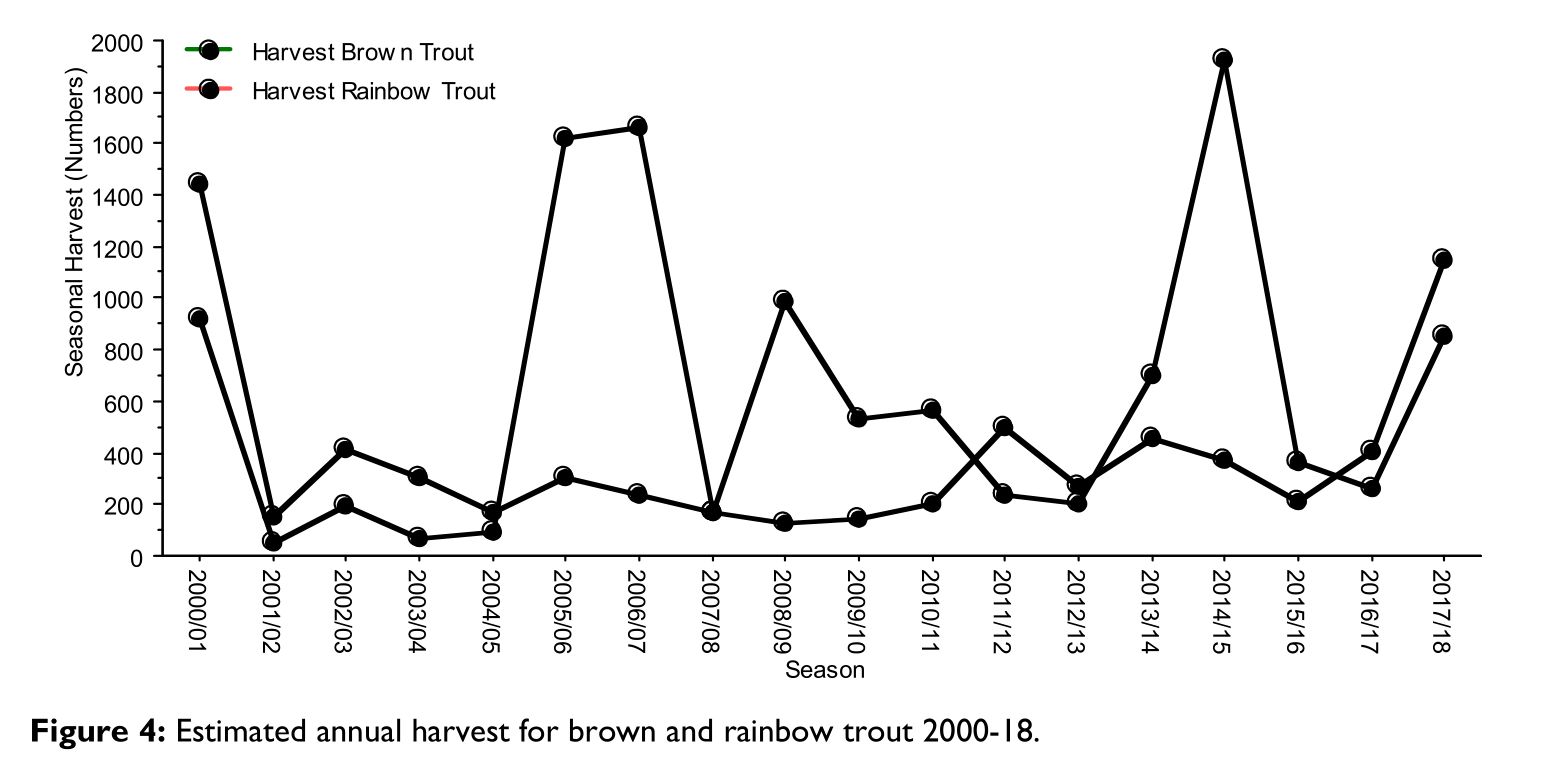 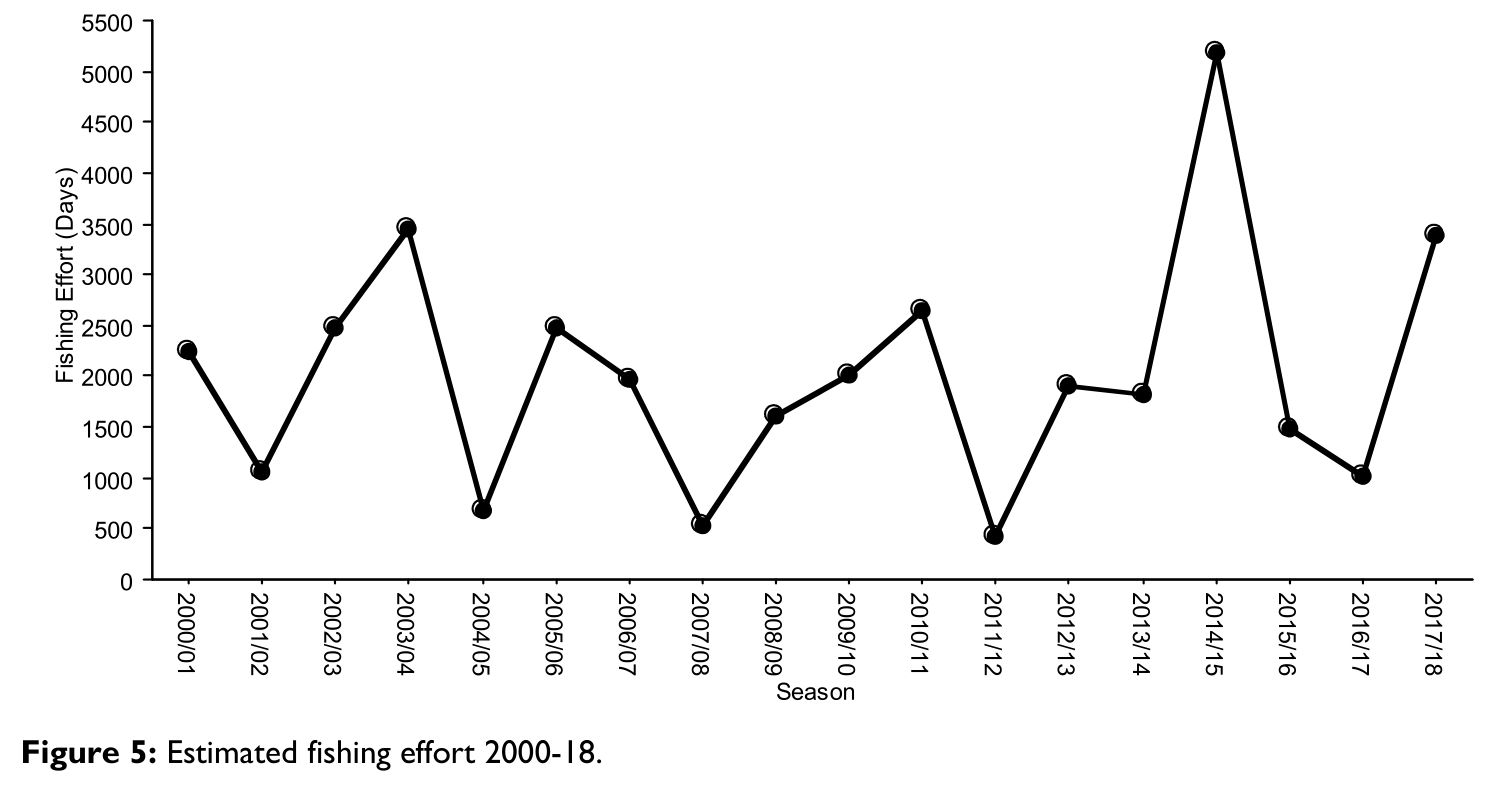 Click on the images for a larger view - opens in a new window.

There were just five rainbow trout captured for the whole survey, indicating very low abundance. The growth of fish is typical of lower productive lake fisheries within Tasmanian, although a larger sample size is needed to make an objective assessment.

Analysis of length frequencies showed two length cohorts. It is difficult to determine the origins of these fish but they are likely to be a mix of adult transfers, fry stocking and/or natural recruitment.

It is evident that natural recruitment from the Pet River is low and unable to sustain a large population of brown trout in the reservoir. The reasons for this are unclear, but the reservoir does appear to have a sizable blackfish population, which may be influencing annual recruitment.

There does not appear to be any demonstrated link between angler catch rates and stocking events, except for one large stocking of yearling rainbow trout in 2005-06. The long-term catch rates for both brown and rainbow trout are low. The transfer of adult brown trout in the period 2014-17 does not appear to have contributed to any meaningful improvement in catch rates. It may be necessary to increase the number of adult brown trout transferred to meet acceptable catch rates, however this would need to be balanced against the resulting increase in fishing effort.