The Wild Fisheries Management Branch wish all fishers a safe and happy holiday period. A big thank you to those who took the time to contribute to fisheries management in Tasmania during 2015, especially the outgoing members of the Recreational Fisheries Advisory Committee (RecFAC), other FAC members and fishers who provided input into the new Scalefishery Management Plan and Rock Lobster catch limits.
Source : http://dpipwe.tas.gov.au/sea-fishing-aquaculture/

Before going fishing make sure you have the new fish measuring rulers, Recreational Sea Fishing Guide 2015/16, or the updated version of the Tas Fish App so you have the new scalefish and rock lobster limits at hand. For a guided to area restrictions we recommend using the interactive maps in the Tas Sea Fishing Guide App or the area restriction web page.
Keep safe and check the weather before heading out. Happy Fishing !

What happens if the weather is too rough and I cannot retrieve my gear?
Your safety is important. If you cannot retrieve your gear due to bad weather, wait until the weather improves. If it will be more than the setting time limit, phone Fishwatch on 0427 655 557 and provide your details including your licence number.

Can someone set or pull my fishing gear without me on the boat?
No. A person with more fishing gear in the boat than authorised fishers would be considered to be using excess gear.

Do I have to set or pull my own pot or net?
The licence holder or aboriginal engaged in a fishing activity must be participating in the fishing activity. A light bodied person or a person with a disability may be assisted by another person in pulling or setting their gear.

Don't leave your licence purchase to the last minute, even if you plan to do it on-line.
Only major Service Tasmania shops will be open for business during the Christmas period.
The Recreational Sea Fishing Section, Wild Fisheries Management Branch will be closed from 3:00 pm, 24 December 2015 until 4 January 2016.
You can check if your licence is current, or get your licence number or change your details on line.
Common problems applying on line ?
Make sure you use zeros and not the letter "O" in the birthdate. In the licence number.
If the on-line licence system is not able to find you, it is because the details that have been entered are not matching the details on our database, including:

*A small number of long term licence holders may have a letter after the code. 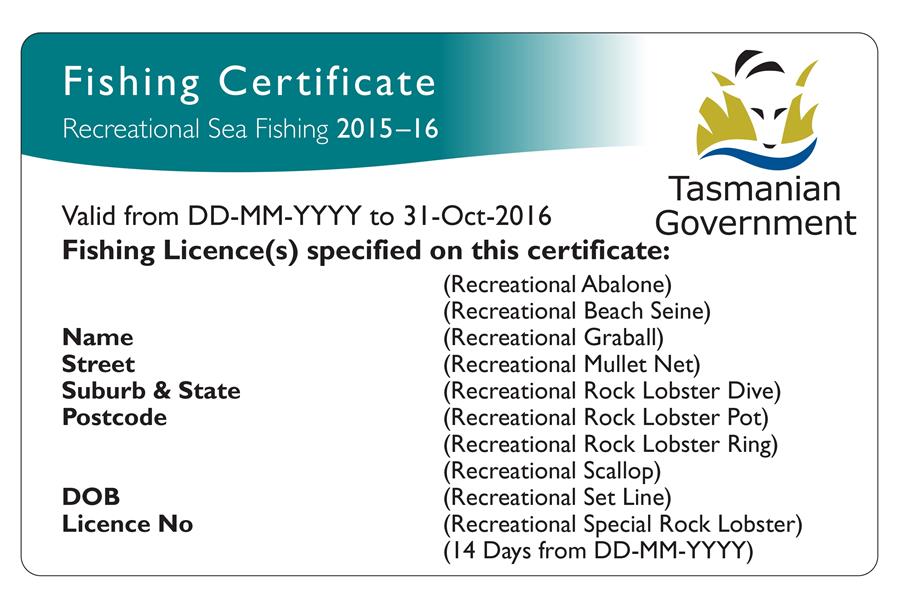 Not only fish get caught !

If you are buying rock lobster this festive season make sure it is a legally caught commercial rock lobster and has a Government-issued tag to distinguish it from recreational rock lobster. All lobsters taken by recreational fishers and aborigines engaged in an aboriginal activity must have the central tail fan clipped or have a 10 mm hole. If you are offered a “deal” please contact Fishwatch on 0427 655 557 with the details.
Remember it is illegal to sell, buy, barter or raffle recreationally caught fish. Both the seller and the purchaser are liable for prosecution.

A hint about measuring your catch
Use an accurate measuring device. Make sure it is thin or has a chamfer that can go hard into fits hard into the middle notch between the antennal horns.
Free rock lobster measuring gauges which may be used as a “guide” are available at Service Tasmania. Certified and higher quality gauges may be purchased from retailers. 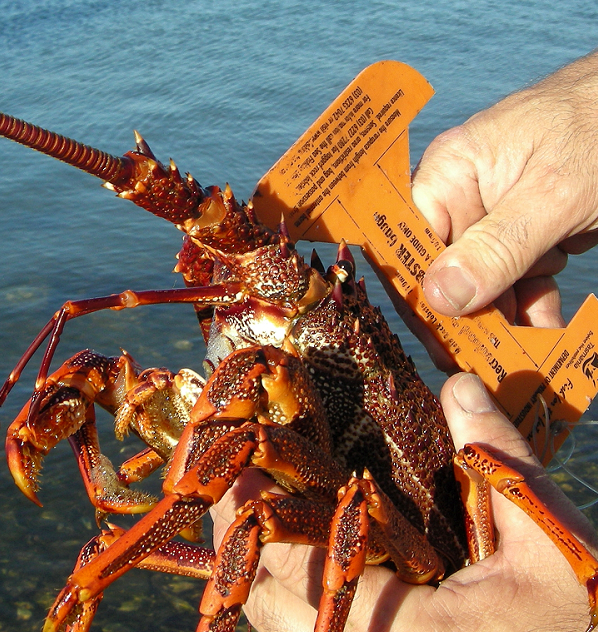 The Maria Island Zone remains closed for taking rock lobster due to persistent elevated levels of biotoxins. The Institute for Marine and Antarctic Studies (IMAS) are scheduled to collect rock lobster samples on Monday 4th January (weather etc. permitting).
This will allow further time for toxins to flush out of the rock lobster in that area, and results should be received for consideration prior to the weekend of 9/10 January 2016.