We left home at 6am this morning and met up with Phil and Bailey Zanetto at the Four Springs car park around 6.30 ish. A couple of cars also rolled in , but not "too many"... to speak of early. It is about at this time, I must admit to my own Tool Academy nomination. I launched my little 12 foot tinny, only to see the rope come undone and it drifting out of reach toward the middle of the lake.

What happened next, I am first to admit, I could never do again in a hundred years, I made up a lasso and threw it over my electric motor first cast and was able to retrieve it!. (How Lucky!)

Phil still thinks it is one of the biggest flukes he has seen in a while, but hey, I WILL TAKE THAT ONE!
Anyway, after that performance, we headed out, Bailey hooked up almost immediately on a cracker of a fish that weighed 5 pounds.

Another two were hooked a short time after but unfortunately both of them eluded us by pulling free of the hooks.
By this time the sun had came up and the water flattened to glass, making fishing difficult, so we decided to head back to the ramp for an egg "n" bacon and a coffee.

To be honest, we didn’t expect much thereafter but still managed another four, we felt quite fortunate as we only saw another couple of fish landed elsewhere.

By the time we left at around 2pm, the place was a Regatta. 60 cars in the car park; we even saw one car back into another’s car door... (A note was left under the windscreen).
The park was so full that people had to park in the "no parking section" just to make room! I've never seen the place so packed, and on a Friday too!...wonder what it will be like tomorrow? As I said, we had a great day even though we didn’t set the world on fire. To cap it off, Phil gave a lady who has been coming to Four Springs for a couple of years (without success ), one of our fish.

It made her, (and our) day as she rushed off to clean it for her families tea. The water there is quite turbid at the moment. Think I will wait a little while before heading back, (for things to settle down a bit)... on all fronts! 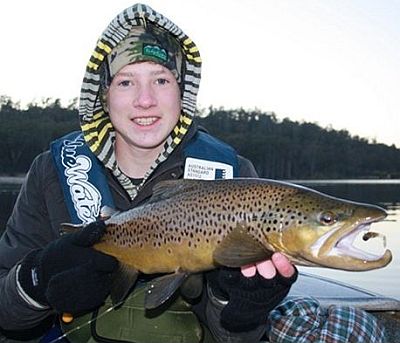 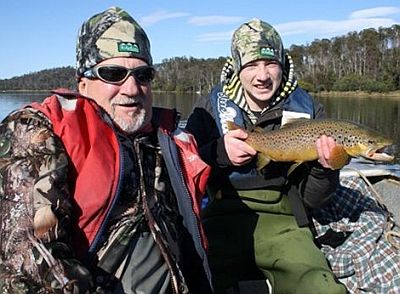