Trout all fired up

After having an eleven day break from trout fishing due to bright sunny days, clear water and mainly easterly winds today was the day to go and chase the trout. Why, because it was a cool foggy morning and there was a nice cloud cover, a perfect morning to go trout fishing in the Meander River. The maximum temperature forecast for the day was twenty seven degrees which meant the sun was going to burn the cloud off and that's when it would start to warm up. As much as I wanted an early start I wasn't in the river until 7:30 am mainly due to a change of area I decided to fish, which resulted in a twenty minute walk to my entry point. The reason I made the change was because I knew once the cloud dispersed I would still have shade along one side of the river and I would probably be ready to call it a day as well, that was the plan anyway. I started the spin session off using a well used Mepps #0 March Brown Bug spinner and it wasn't all that long before I hooked and lost the first fish of the day, thankfully it was only a small brown trout.

A few minutes later I had a hit and miss from another trout, once that happened I felt it was time to go for a brand new March Brown Bug spinner. The Bug spinner I chose was one that I had placed two small #00 Mepps black fury stickers on as an experiment to see if it would work on the trout. I have done this in the past with the small #00 Aglia spinners and it's worked quite well on the trout. After making a few adjustments to the treble hooks such as putting each hook off centre to the shaft, turning each hook marginally inwards. To finish off the hooks were given light touch up with a small pocket sharpening stone, the new #0 March Brown Bug was ready to go to work. And work it did, fives minutes on after a long cast directly upstream a solid brown smashed the bug. It was a decent size brown trout, one that made several leaps from the river and a few hard runs as well before I had it in close enough to ease it into the net. Looking at it while it was in the net I thought it was in the 500 gram range, once I weighed it while it was in the net I was quite surprised to see it was a 665 gram fish after deducting the 310 gram net weight. Over the following hour and approximately one hundred meters of river I caught another four browns on the March Brown spinner, then the sun started to break through the cloud and was on the water surface. The trout were now following the lure for a short distance before turning away, the aggression was gone, the sun being on the clear water had shut them down.

I had to make a lure change, would it go for a #0 Black Aglia Mouche Noire or stick with the bug spinner, I chose to go with a new #0 Stone Fly Bug spinner, like the new March Brown this one also had a couple of small Black Fury stickers on the blade. Ten casts and retrieves later I picked up the sixth trout of the morning in a medium fast flowing semi shaded stretch of water. Fifteen after the release of that small/medium size brown while fishing a shallow fast flowing stretch of river I caught and released four nice browns using the cast and drift method. Each of those trout were lured from small flat waters close to the opposite river bank. From there I moved into a wider medium flowing stretch of water that was also good for casting and drifting the Bug spinner. Half of the river here was in full sun, thankfully the side I was fishing from was the shaded side. Like early on, the trout were here, they would follow the lure for a short distance then turn and move off. Then lady luck arrived, the cloud cover returned for a short time and the trout were on again until the cloud dispersed again and the trout shut down once more. The good thing was when the cloud cover returned I did catch and release another four trout with the best fish being a nice well conditioned 515 gram brown trout.

Once I had reached the top end (11:05am) of that stretch of water I was fishing in full sun and I could really feel the heat, it was intense. I thought about calling it a day then and there but decided to give it another ten minutes in which I did catch one more small brown trout from a fast water run. With fifteen trout now caught and released it was time to call it a day and head back to the car which I didn't do, I fished on for another thirty five minutes without catching a fish. They were still there but the aggression was gone, the shallow clear water that was in full sun wasn't worth putting any more time and effort into. As I crossed back to the side of the river where I was going to exit I had a couple of casts and retrieves into a narrow run of water close to the river bank where I hooked and lost two small browns. Once I scrambled my way up a heavy foliaged covered river bank and made it into a more open area, I then had the joy of a thirty five to forty minute walk back to the car in full sun. Once I was back at the car the first thing I did was to start the car and put the air conditioner on, I was that hot and bothered I even felt a little giddy. Leaving home and not having breakfast or drinking water while fishing for four and a half half hours followed by the long walk back to the car probably didn't help either. One day I may put my brain into gear and quit while I'm ahead. Anyway, the spin session was a better one that I was expecting, with fifteen trout caught and released which included two very nice trout, a good overall result and a much needed one at that. 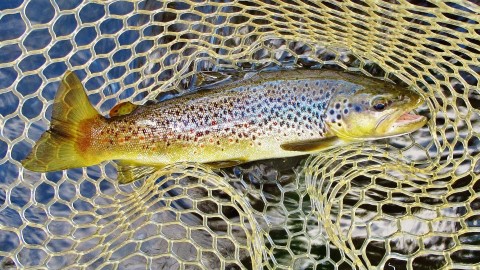 Another solid brown trout made it into the net 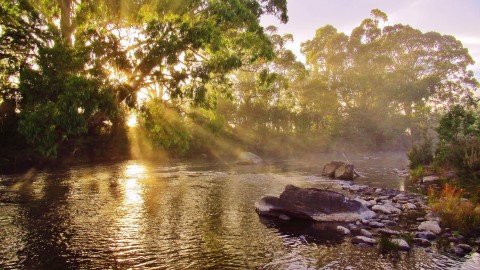 Beautiful time to be in a river 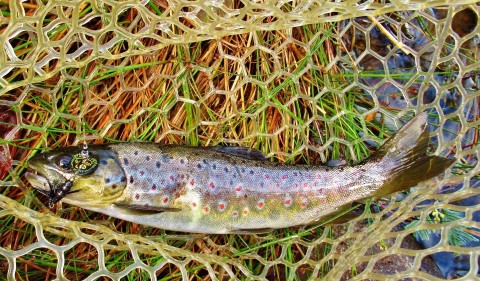 Most of the trout were medium size fish today 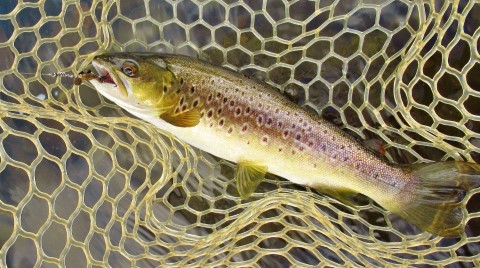 The March Brown gets another one 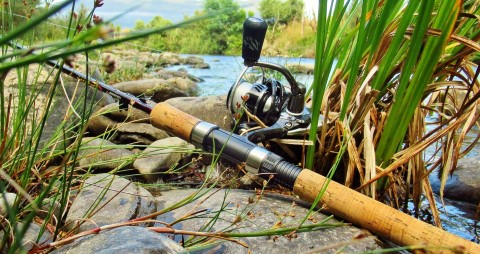 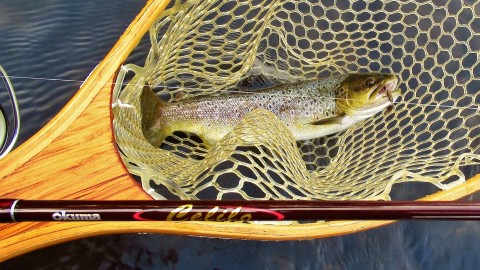 This plump brown is finally in the net