The choice of where to fish pays off

As much as I wanted to do today, fast water fishing was taken off my where to fish list, I still headed to the same river and started the spin session in the slower flowing waters of the Meander River. The same waters where the river bottom is covered in green algae and brown slime, the water level was up by 40mms so that gave a little more space between the lure and the river bottom today. I was in the river by 7:10am this time, a little earlier than my last trip here, I started off using a #0 Mepps March Brown Bug spinner only to have it fouled by the green algae that was drifting down the river.

This happened several times and at one stage I thought about getting out and heading off to the fast waters, then decided to push on and put up with it. The trout were few and far between as I fished my way upstream with the March Brown Bug spinner drawing the attention of quite few small brown trout of which four of them took the spinner. It had taken an hour and twenty minutes to catch those four small trout and by 8:55am I hadn't caught any more, it was time to get out and try elsewhere on the river. I had four places in mind, it was just a matter of which one had the shortest walk now that the cloud was breaking up and patches of sunlight were appearing, with a temperature of twenty four degrees forecast I wasn't in for a long walk at this time of day to reach the river. I had it down to two areas on the river that had the shortest distance to the river, the one that had the longer walk of the two was one that normally fished well, the other which had the shorter walk hadn't fished all that well for quite some time. The shortest walk to the river was the one I chose, why you may ask, because it was the shortest walk, it was now 9:20am and getting warmer and I needed to see if the trout were back in this area. I didn't fish this area at all during the trout season last year for the very reason the trout were not there in good numbers. Once I was in the river (9:30am) it didn't take all that long before I caught and landed the first trout, three minutes here and I had a fish take the March Brown Bug. It was only a small trout but that didn't bother me because it was the first time in a long time that I've caught one there. After the release of that fish I had three more hits for one hooked and lost trout, just after the loss of that trout I spotted one leap from the river a few meters ahead of me, a long cast and retrieve in that general area results in another trout being landed. Even though the two trout that were caught were small it looked like they may be back here in good numbers. Instead of continuing to fish my way up the river I hopped out and headed off downstream for another three hundred meters or so where I returned to the river to start fishing my way back upstream. I felt if the trout were up there then they should also be down here as well. It was a good idea doing what I did because the trout were here too and I caught several more using the cast and drift method working the right hand side of the river from the left side. The sun was fully on the water here and the only shade was along the left side of the river, I did pick up a couple from the shaded areas as well as hooking and losing a few on the way. I had to make a change of lure when the trout started following the March Brown without any signs of aggression towards it, the lure that replaced it was the Stone Fly Bug. I felt the trout went off the March Brown because of it being a light brown in colour and the water being so clear and in full sun was the main reason for them going off it. It didn't take all that long when the StoneFly Bug started working on the trout, and before I knew it I had reached double figures for the spin session. I was probably within a hundred meters or maybe less from the car when I reached the double figure mark and I was pretty satisfied with that too. The casting and drifting was working a treat in the river today, I could do no wrong with it today and I went on to catch another five trout before reaching the area where I had parked the Trout Stalker 2. All up I caught fifteen trout from twenty two hook ups and I lost count of the hits and misses I had during my time in the river today. The decision to head here was a good one that paid off in the end, what was even better was the river bottom was in very good condition there with no signs of green algae or brown slime to be seen. I will return here for another spin session before the season ends hopefully. 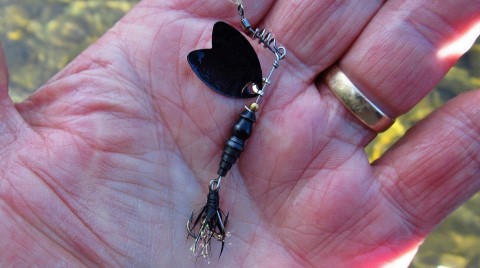 Alterations made to the treble hook 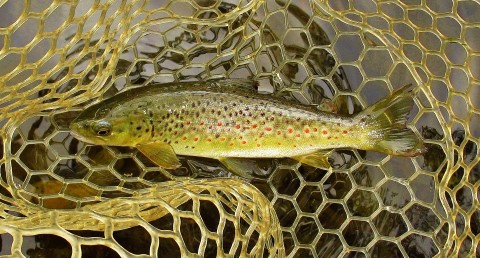 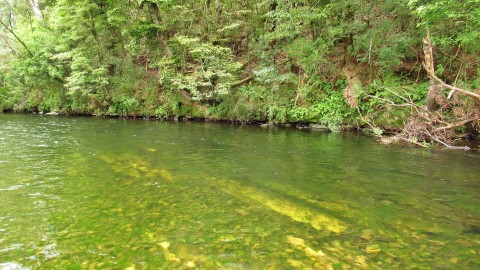 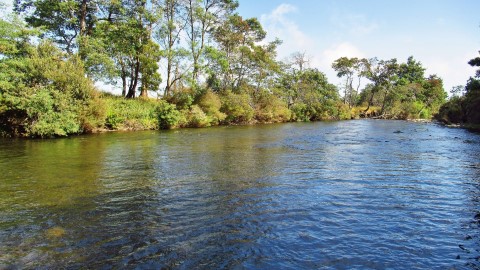 The choice to move here was a good one 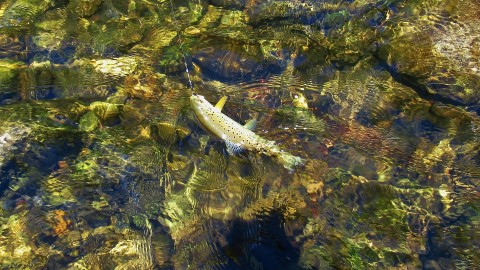 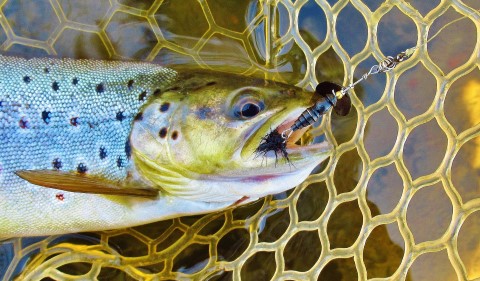 This brown fell to the Stone Fly Bug spinner 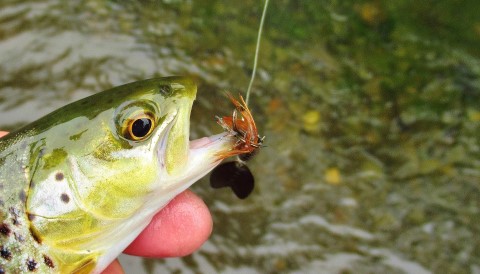 This little brown took a like to the March Brown Bug