Fifteen trout and 200th for the season

Perfect weather was forecast and with the Meander River running at 60cms it was time for another fast water spin session today. I was in the river by 7:20am and the conditions were perfect as forecast, the river was running cool and clear it couldn't have been better, all I needed now was to find the trout. This morning I decided to give the Black Fury a go, the Black Fury inline spinner is the first lure I caught a trout on some 55 years ago and it's the lure that got me into trout fishing. It's been a while since I used one and with the water being at the right height today I thought it was well worth giving it a go using the cast and drift method in the fast waters. With the water running at 60cms there's a lot of flat waters on both sides of the river and I'm hoping most will be holding trout.

The first seventy meters of water I'll fish from the left side of the river, from there I can easily lob the spinner into the flat waters on the opposite side (18 meters away) of the river and drift the spinner with the flow. After that I'll be changing from one side of the river to the other as well as fishing from the middle of the river because of the various water depth and fast flows that could take my feet from under me. It's going to be a long slow spin session here today, care is a must when fishing fast waters like this.The first few casts and retrieves drew the attention of a medium size trout that took the spinner on the drift but I lost it as fast as it took it. A little further up the river and another long cast into another flat water near the opposite side of the river saw another trout come up behind the spinner, as the lure drifted with the flow I gave the rod a light twitch and the trout took the spinner. I knew it was a reasonably good size trout as it made a fast run downstream then darted back across the river where it made a few leaps from the fast water.

It took a couple of minutes before I knew I had this fish under control as it ran out of steam and I could manage to get it to my side of the river and into the landing net. As much as I love seeing trout leap from the river I also feel nervous that the fish may only be lipped and it only takes one or two solid head shakes for it to toss the lure. This fish was a well conditioned solid brown, I weighed it while it was still in the net then deducted the net weight, the trout went 475 grams and it was well hooked in the lower jaw. The following forty metres of river was unproductive with not a sign of a trout, it wasn't until 8:00am when I had the second trout take the Black Fury. This brown was a decent fish too and like the one caught earlier it ran every which way in the fast water trying it's best to toss the spinner, it didn't, this fish made it into the net. It was all quiet again as I fished my way upstream until I reached a deeper slower flowing stretch of water, it was here I caught and released three small/medium size browns in fifteen minutes.

Once out of the deeper stretch of water ahead of me then was all fast water and one of the toughest long stretches of fast water it was at that. I knew what I was in for fishing my way up through it, it's slippery and the rocks roll under foot and there's a lot more force on the body here too, this water runs hard and fast and isn't for the inexperienced fisher person. No sooner had I moved into it when I picked up my sixth trout of the morning, it was only a small brown but they all count. From here on I kept hooking trout in the flat waters close to the river banks, the only problem was having them staying hooked. I lost five trout in a row, four on the gold Black Fury and one after a change to a Stone Fly Bug spinner. You'd think at least one of those five hooked trout would have stayed on, this is all a part of what happens when chasing trout in fast waters, even more so when the sun is on the water like it was now. I think it was only five minutes after losing the fifth trout in a row when a small brown fell to the Stone Fly Bug spinner, trout number seven was caught. The fast water I was in now was getting harder the further I moved upstream, the rocky river bottom was much worse than where I had just fished and the rocks were larger which didn't help.

The good thing was I went on to catch another five trout from nine hook ups in forty five minutes. With a tally of twelve trout now caught & released by 11:40am I was seriously thinking about calling it a day, but I could see there was still some good water yet to be fished ahead of me so I carried on. I went for another change of lure as I headed into this tough long stretch of fast water, this time it was a March Brown Bug that went on. It did take a while before I had my thirteenth trout in hand, in fact it took thirty minutes to catch it. It was only a little one at that, my problem now was to get off the number thirteen, something I often have a problem doing. I hooked and lost fish after fish on it before I finally had the fourteenth trout hooked and landed, five minutes after it's release I picked up my fifteenth fish. I was now ready to call it a day, my body was full of pain, I was done. I did have a few more casts and drifts with the spinner as I made my way across the river on my way out and had a couple of hits but no hook ups. There was still some nice water ahead that I would have loved to fish, even though the mind said to give it a go, the body was telling me enough is enough. I hopped out of the river at 11:45am and was back at the car at 12:25pm totally buggered. It was the longest spin session so far this season. With fifteen trout caught and as many hooked and lost it was still a top day in the fast water and I will be back there again more often than not as the season goes on. It wasn't until I got home and filled out my Angling Club trout catch form that I realised that the last trout I caught was my 200th for the season. I thought I needed seventeen for some reason, anyway it was a surprise and a good way to top off the day. 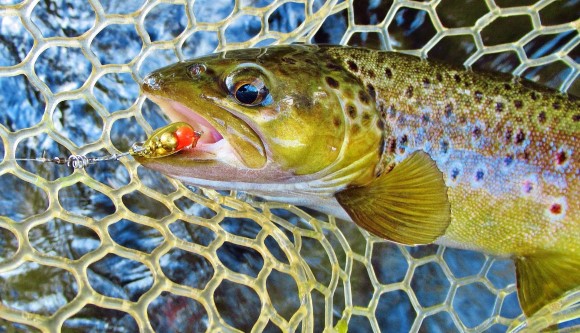 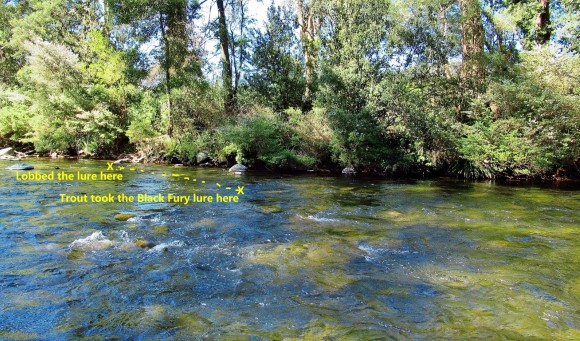 One of many flat water areas that gave up trout 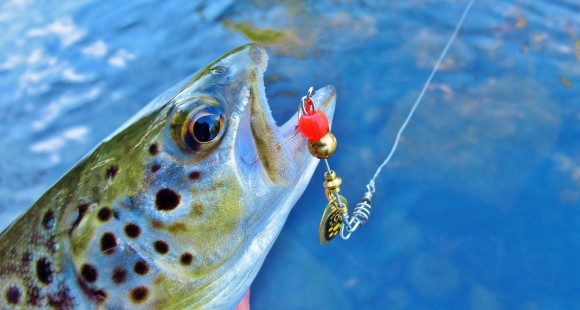 One of six taken on the black fury 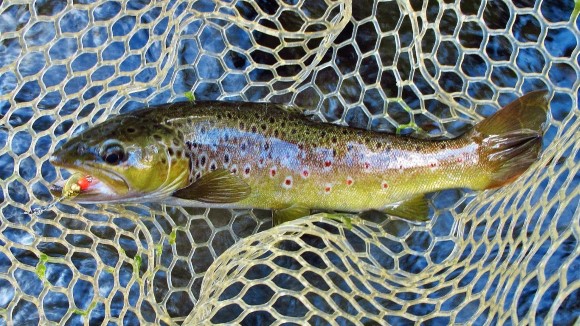 The first of the day fell to the Black Fury 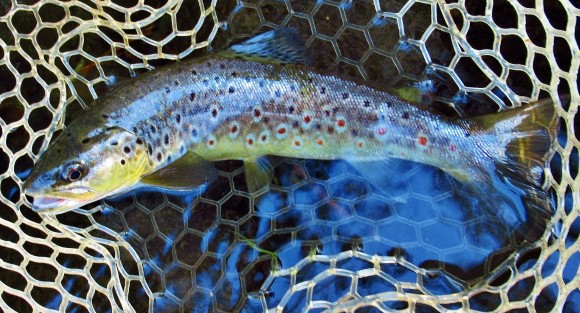 This lovely brown is ready for release 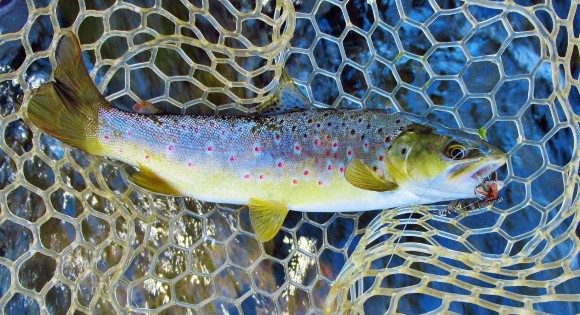