After having such a great fast water spin session a few days ago I headed back to the Meander to have another crack at getting a double figure catch. This time it was a mid morning start, a morning that had clear skies, light breeze and a temperature of 22 degrees later in the day.

It was 9:45 am when I hit the river above the Chestnut Road Bridge to fish a long nice stretch of fast water, the first thing I noticed was green algae covering the most of the river bottom. Soon as I had seen that I knew then and there it wasn't going to be a good day on the trout here. I did fish around four hundred meters of river without seeing a trout so headed back to the car and drove to the fast waters in the upper Meander River.

I didn't go to the same stretch of river I fished three days previously but one a lot further up, an area I haven't fished at all this trout season. This fast water may not look all that tough but I can tell you now it as tough as it gets, much tougher on the body than the one I fished a few days ago. Always remember “looks can be deceiving” and this is certainly one of them. As tough as it is, it does hold a lot of trout and well worth the time and effort one has to put into it, it's also one that's not for the inexperienced trout fisher.

It's a mix of long deep fast water, short scattered fast water with the occasional wide medium/deep water, all of which are full of slippery rocks of all shapes and sizes than roll under foot. It only takes one mistake and you will be in the water bouncing your way downstream. It was 11:55 am when I was finally back in the river, the first stretch I fished before heading into the fast water was a long deep medium flowing run that could only be fished from the right hand side due it it's depth and a little further up some very unsafe fast water. Anyway all I could manage here while using the #1 Aglia Mouche Noire was two hits for one hooked and lost small brown trout.

When I reached the deep, top end of this run I couldn't go on any further, it was time to get out and do a little bush bashing to the more open fast waters a hundred meters upstream. Once I found my entry point I was soon in the middle of the river (11:30) slowly making my way upstream working both sides of the river with the Aglia Mouche Noire. It wasn't long before I had a hit from a medium size trout in a shaded piece of water to the left of me but missed hooking it. A long cast up and across the river to the right hand side I let the lure drift with the fast water while retrieving it at the same keeping the spinner at the same speed as the flow a small brown came out of nowhere and took it.

This little 280-290 gram brown gave it's all to toss the spinner making several leaps from the river before I slipped the net under it, the first trout of the session was landed at 11:36am. After that I hooked and lost a couple of small browns before making a lure change, it was on with a #0 (2.5gram) Stone Fly Bug spinner to see if that could get a trout to stay on. Several casts and retrieves to both sides of the river saw trout chasing the Bug spinner in and around the rocks nipping at it but just missing being hooked. To me this is just a part of fast water trout fishing seeing the trout chase a lure only to miss the trebles or being lipped and tossing the spinner as quick as they took it.

It wasn't until I had reached a slightly slower flowing fast water when the spinner was taken by one solid brown that really took off no sooner had it taken it. This was a good size trout that had the Okuma Celilo Finesse ULS 1-3kg rod well and truly bent over, it made quite a few leaps from the river and was certainly testing out the fine 4lb Platypus Super 100 mono line as it made several hard runs every which way. The little Okuma Inspira ISX20B reel was holding it's own with this trout too as line peeled from the spool, it took a few minutes before the trout tired and I had it in close enough to lead it into the net. With this trout being such a decent size fish I didn't mess around getting the camera out to video it, I didn't want to chance losing it like I've done previously, it was a good decision, once the trout was in the net out popped the lure.

After a couple of quick pic's I weighed it while it was still in the net (less handling of the fish the better) and after deducting the 410 gram net weight the trout went 1.04 kgs, my first trout over a kilo for this season. A little further up the river (8 minutes later) I was onto another nice brown trout that quickly snapped up the stone fly spinner, it was taken at the tail end of a long, wide medium flowing stretch of river. After the release of that brown I moved into the medium flowing water, it was here the trout were few and far between, those trout that were about only followed the stone fly & march brown Bug spinners.

Other Mepps lures I tried were the Black Fury and Aglia Mouche Noires all with the same results, the water that was in full sun was just too clear for the trout to take the spinners. It was time to give the little thirteen year old unbranded brown trout pattern lure a go in the clear water to see if a trout may take a liking to it. Well, it didn't take all that long before it was fish on after a long cast across the river into a small shaded area. This was another decent size brown that ran me all over the place trying to get rid if the little hard body lure, after it made a couple of leaps from the river it soon tired and I had it in the net.

It was a beautifully coloured, well conditioned brown that went 670 grams. It was a little quiet until I was nearing the head water when the trout came on the take again, it was here I hooked and landed another four nice browns from seven hook ups. All of those trout were quality fish too and would have averaged around 400 grams, amongst them was trout number nine which brought up my 300th trout for the season. From here on I was back into the fast water where it's running hard and fast plus the depth varies from just below the knees up to around eight inches inches above them.

It's here one has to make sure each step taken has a good foot hold on the slippery, rocky river bottom, there's no room for error at all. From here on the trout were fussy and well scattered in the fast water, they were into taking the Stone fly for a short time then go for the March Brown before I finished the session with the last two taking the White Miller. In all it was a reasonably good session with fourteen trout caught & released from 24 hook ups. 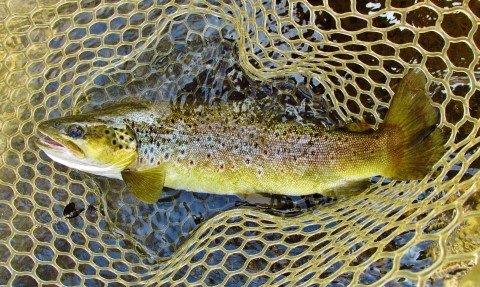 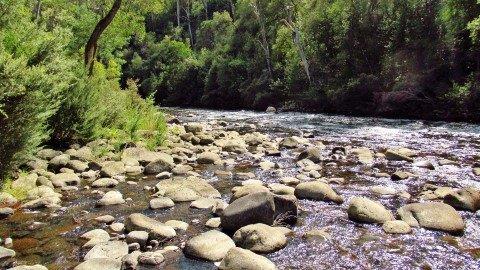 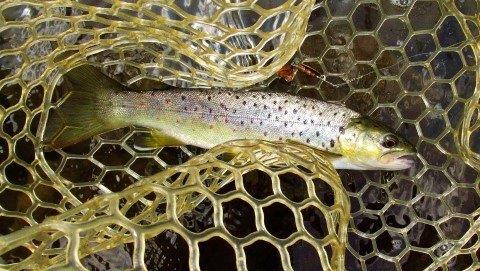 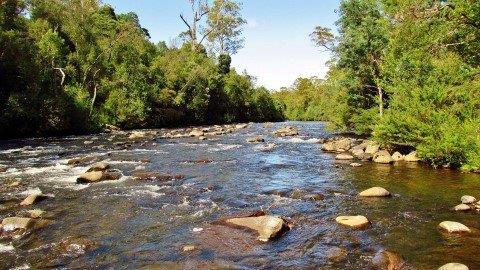 My kind of trout water

The fourteenth and last trout of the day