Rain puts a dampener on the trout fishing

A cool morning with light drizzle, what a top day to head of for a spin session, yes you guessed it I was on my way to the Meander River again to have another spin session in the fast water. When I arrived (7;35am) the drizzle had gone but it was still quite cool with heavy cloud cover which made it near impossible to see the river bottom. On heavy overcast days the cloud cover acts like a mirror on the water and polarised sunglasses don't work either, they're okay in close to the river bank with the cover of foliage but that's as far as it goes. Any way I started the morning off using a copper #00 Aglia Mouche Noire and picked up a small brown mid stream in the first five minutes, just the start I was wanted. The river was down a little since my last trip here six days ago which was good as it meant the trout should be well spread out across the river.

Making sure each step taken I had good footing on the slippery rocky river bottom as I slowly made my way upstream casting and drifting the little copper spinner without a hit from a trout. It was time to go for gold, a colour that always works well on days like today, a gold #00 Aglia Mouche Noire was the spinner that went on. The second cast with the gold Mouche Noire into a small flat water directly ahead of me resulted in a hook up, my second fish of the morning was on and soon in hand. A few cast and drifts to the opposite side of the river resulted in another brown taking the lure which it tossed in quick time.

Two trout from three hook ups in fifteen minutes wasn't good enough in my book. It wasn't until I had reached the cattle bridge twenty minutes later as light drizzle started when I caught my third trout after a direct cast up and under the bridge, just a small 270 gram fish. This time instead of passing under the bridge and crossing the river I hopped out of the river, crossed the bridge (8:25) and re-entered the river. This was much a much simpler way and a lot easier on my body as well, I don't know why I haven't thought of this before. Just as I was about to hop back in the river the light drizzle turned into light rain which was still okay even though I was getting a wetter it wasn't enough to stop me fishing yet.

Once back in the river I started to slip and slide a little on the rocky river bottom, it was very slow going because it was impossible to see the bottom due to the heavy cloud cover & rain on the water surface. To make matters worse there were no trout to be seen in the first stretch of river, a stretch that normally gives up a trout or two. It wasn't until I had reached a divided area on the river near the irrigation pump station when I hooked (8:40) a solid trout, it was the trout of the day so far. I had cast the spinner into a small pocket of water behind the floats that held up the irrigation intake pipes and that's where the trout smashed the lure. It made a run over the rocky tail end of the pool and into the fast water where it fought like hell to toss the 1.5 gram gold spinner.

Thankfully it wasn't a large trout like I caught in the same spot several years ago, one that went 2.7kgs (5lb 15oz) and took me ten minutes to land. The trout that took the little gold spinner today only took a couple of minutes to tire it out and lead it into the net, it went 515 grams and was in beautiful condition. Three minutes later in the same stretch of water I hooked and landed a small brown as the rain became much heavier. I fished on until 9:25 am before getting out of the river, I was drenched plus I hadn't had a touch from a trout for so long it wasn't worth knocking the body around any longer. Not only that I was wetter inside my waders than on the outside of them due to my clothes/fishing vest being saturated.Once I had reached the car after a short ten minute walk the rain started to lighten up but not enough to get me back in that fast water. I was heading for home when the rain dropped off to a light drizzle so I decided I'd take a dirt road and head to another stretch of the Meander River and give that a go. I went straight to one of my favourite stretches of water that has a mix of fast & medium flowing water, one that does give up a trout or two most times I've fished it.

By the time I got there and put the wading gear back on it was 10:20 am when I was making my way up the river. On the second cast up and across a medium flowing river I had a follow from a non aggressive brown, it sat a couple of inches off the back of the spinner before turning and moving off. I did think of making a lure change then decided against it, I thought I'd stick with the little #00 gold Aglia Mouche Noire a little longer. The light drizzle had gone but the wind had started to pick up from the North East and it wasn't a warm breeze either. Still being saturated from the rain early on I was feeling a little on the cool side now. Not being all that far from the car I was in two minds whether or not to go and get my light waterproof jacket out of the car but decided against it and continued fishing my way up the river.It wasn't until I was close to the shallow fast water when I picked up the first trout from a small flat water near the opposite side of the river. Like most of the trout taken during the spin session today it was only a small 280 gram brown. Sticking with the gold Aglia paid off, but not for very long, after having a couple more follows and no takers I swapped over to a #0 (2.5grams) stone fly Bug spinner, another lure that does well here.

Twenty minutes on and having a few follows from some small browns I finally had one take the Bug spinner, another little 275 gram brown. The fishing was pretty slow going here but the river bottom was much easier on the body so I continued on knowing I would still catch a couple trout in the waters ahead of me. As time went on the wind became stronger and was gusting around 20 -25 kph which was blowing dead leaves, small twigs and grass onto the river. I felt the fishing gods had it in for me today for some reason, I thought I'd fish on for a little longer then call it a day. There was still a couple of decent fast waters I wanted to fish before ending the spin session. Thankfully the the last short fast water gave up the trout of the day (11:30am) after I had cast the Bug close to the opposite river bank it was snapped up by one very aggressive brown trout.

It ran me around for a couple of minutes before I had it in close enough to lead it into the net. It was then the Bug spinner popped out of it's mouth, how lucky was I, the fishing gods were on my side after all today. After a couple of photos then weighing it while it was still in the net it was soon back in the river and on it's way. That fish weighed 535 grams after deducting the weight of the landing net that weighs 400 grams. My day was done & with eight trout caught it wasn't as good a day that I was expecting, I was looking to have caught a lot more than I did. Was I disappointed today, yes I was mainly because of the rain that put a dampener on what could have been a much better day in the first stretch of fast water I was fishing. 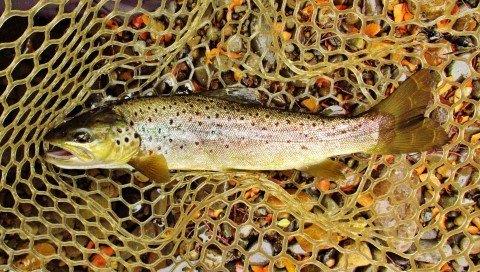 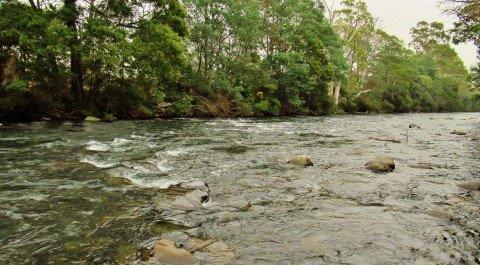 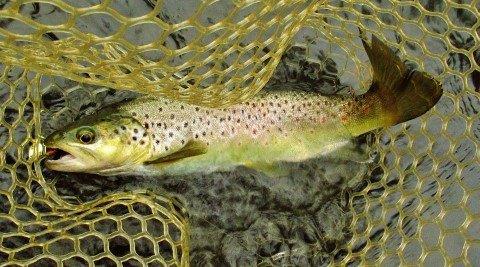 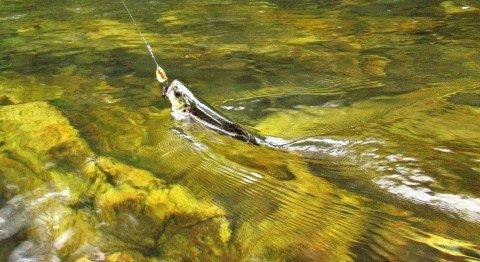 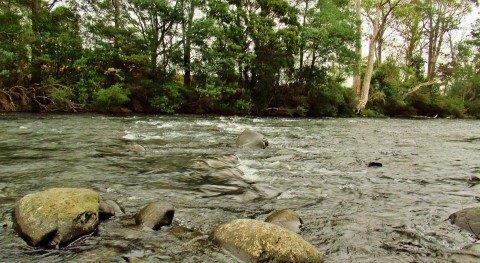