Trout aggressive and in good numbers

Calm, mild overcast conditions had me heading back to have another crack chasing trout in the rocky fast waters of the Meander River. I hit the river at 7:40 am to find it was a little lower than my last trip here, it still had plenty of water coming down. Like most of my trips of late I started off with the lure that keeps on keeping on even though it's now very much worse for wear, the copper blade Mepps #0 Aglia Mouche Noire was the lure.

I only intended to fish a five/six hundred meter stretch of river then move to another area two or so kilometres further downstream. The area I fished was perfect for the cast & drift method and it wasn't very long before I had the first trout hooked and landed. The trout were here but they weren't overly aggressive to start with, they were just nipping at the spinner. I stayed with the copper Mouche Noire lure and by the time I had reached the area I was finishing up I had caught a total of six small browns from nine hookups.

The trout had suddenly become aggressive which I was quite happy with. The reason for not fishing any further up the river here was because it was a very rocky and tough long stretch of water and one of the hardest to fish on this river. Seeing as I had around thirty injections in my lower back and hips the day before I thought it wise not to fish there this trip. I was heading to a long stretch of river that I hadn't been to for at least four trout seasons because I was interested to see if it held any fish. I gave up fishing there because it died right off, the trout were very few and far between and it was a time waster.

As I neared the turn off to the river I drove past it and decided to fish one of the areas I knew would give up some trout. I had only gone a few hundred meters past the turn off when I had another change of mind, I turned the car around and headed to the area I hadn't fished for the last four seasons. I just had a feeling I shouldn't bypass that long stretch of river, it could be worth having a go there, I had nothing to lose by giving it a go. It was slow going for the first couple of hundred meters with no signs of a trout. I was now doubting my decision & in two minds whether to carry on or not when I picked up a small brown from a direct cast and retrieve straight up the river. Well, catching that little 280 gram brown was enough to keep me fishing on and it wasn't long before I had another small brown take the Aglia spinner.

I came to a wide, deep slow flowing stretch of river which I bypassed because I only wanted to fish the medium/fast water runs here this trip. After bypassing that stretch of water I was soon back in the river where I had several follows on the copper Aglia but no takers. It was time to try a small hard body lure to see if that may hit the aggression button on the trout. That little lure did the trick, the trout really turned aggressive and kept taking it on a regular basis. I finished up catching and releasing eleven browns and one rainbow trout from fourteen hook ups, the trout varied in size from small to medium fish with the best one going 510 grams. There was just the one quiet period when the trout were nowhere to be seen, that was in a wide medium depth stretch of river that didn't have any cover on both sides of it.

It wasn't until I was back in a narrow fast/medium water when I started having more hits from the trout. I went back to the Aglia Mouche Noire again to fish the last one hundred meters of river before calling it a day. The Mouche Noire did it's job in catching two more browns from six hits. I finished the spin session with a total of twenty two trout being caught & released. After some hesitation to fish here before deciding to do so turned out to be the right one in the end. Today's catch gave my seasons catch a good boost which I'm very happy with. 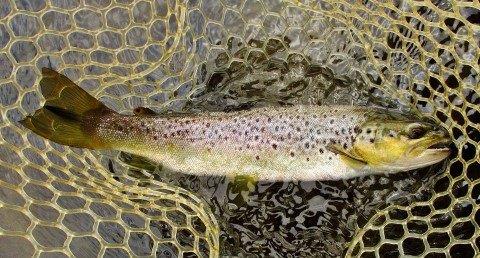 One of several trout caught 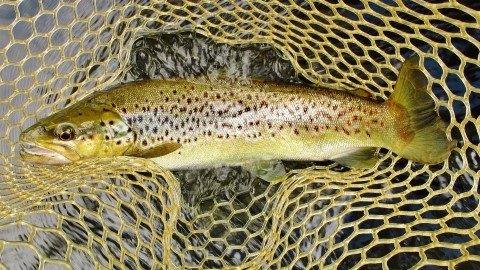 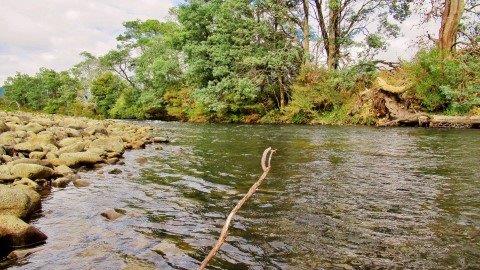 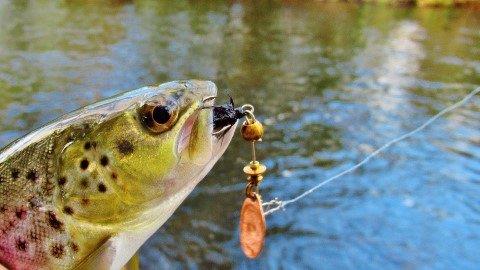 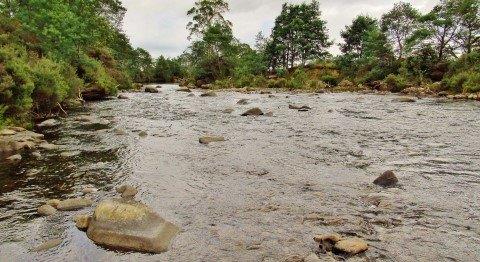