Trout number 400 for the season

Given it was a beautiful cool & frosty morning I decided to head off for an early spin session to see if I could catch three more trout to reach the 400 mark for this season. It's been a tough one for me so far and being around 120 or more trout down for the same time last season, reaching the 400 mark will make up for my poor season.

Also I wanted to try out a couple of new hard body lures from a site member on fishing boating Tasmania who makes & sells his own lures under the name "Pointer Lure Project". First of all I started off in a shallow stretch of river and had to use the Mepps spinners where I could only manage the one small brown in freezing conditions. It had taken me just on an hour to catch that trout in the one kilometre stretch of water I fished.

I did try several different spinners over the distance and had a couple of follows and that's as far as it went. I decided to head off and try another area further downstream that I knew would at least have some sun on it and I could warm up a little, also it was an area I haven't fished for two seasons. It was a little deeper and would be more suited to the larger hard body lures I wanted to try out on the trout.. First one I tried was the 57 mm Sandy a shallow sinking lure, it had a great action and it did attract the attention of a couple of browns.

The stretch of river I was fishing wasn't quite deep enough for it and a few times it bottom bounced and became fouled with some green cotton like algae. This was a real shame as I'm sure it would have picked up a trout or two as the session went on, I will give it a go in a deeper run on my next trip or two. So it was on with the 55 mm Green/ black striped “Sergeant Major” floating shallow diving lure, not sure what the name is but it only took three casts with it before I had a solid brown smash it. A nice 410 gram brown made it's way into the net

I was now on 399 for the season, all I was hoping for today was to catch three trout after that I didn't care. It only took another five minutes when I flicked the green lure to the top end of the stretch of river I was fishing when the lure was taken again. This time it peeled line from the reel big time & stayed deep, I knew then this was one decent size brown and patience was a must. Knowing I had number 400 on the end of the line I was feeling a little on edge, it took me close on ten minutes playing this fish before I finally had it in the net. It was a beauty, a well conditioned wild brown that really put the fine 4 lb mono & hard body lure to the test, both came out on top and so did I.

Trout number 400 was landed, photographed then released back into the river.. I was really stocked to catch a quality fish, something I wasn't expecting to do today at all.. I fished on and caught another three nice browns from four hook ups in what finished up being a very good few hours in the river. 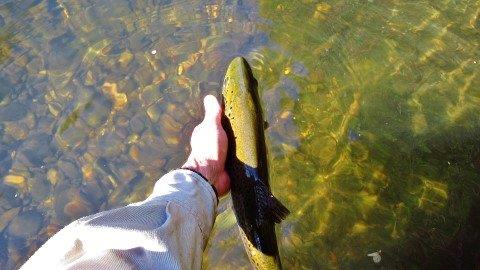 Meander River and trout No 400 is on its way 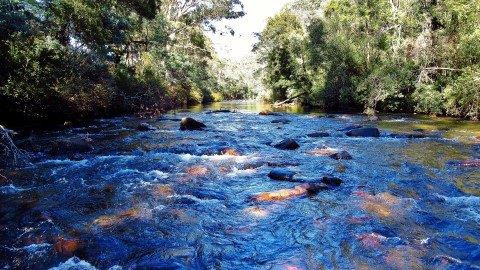 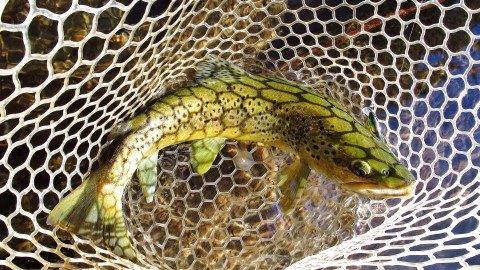 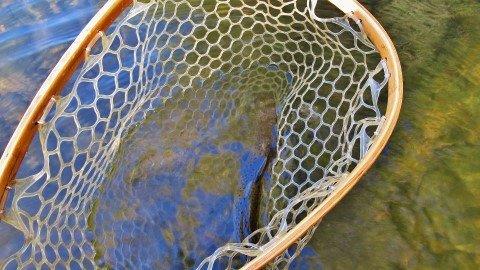 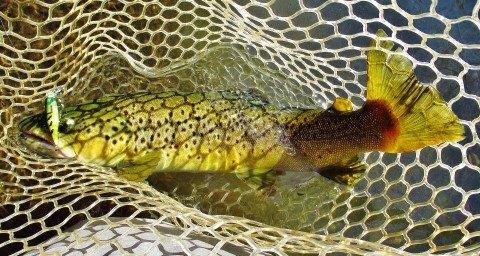 The Seargent Major lure catches trout No. 400 for the season