Took another trip over to the Meander River again to day to see if there was to be any improvement in the trout fishing. The forecast was good with light winds & a temp of around 21 degrees, I was in the river by 7:00 am & the air was damn cold as was the water temp. It was also running at 70 cms which is on the high side for wading but still safe enough when you know the river. I started off with the lure that's been working the best in the rivers & that was the Mepps #1 Aglia Furia. I had a trout take it in the first five minutes and I thought I was in for a good day.

Well, that was the only trout caught in the long 500 meter stretch of river even though I did hook and lose two others as well as having a few hit & misses. It was time to get out and head elsewhere on the river. I headed to another stretch of water a kilometre upstream, it's a stretch like the rest of the river that's fished poorly all season. I wanted to see if it has improved since I last fished it several weeks ago. It was a little slow to start with and after thirty five minutes of pushing my way upstream against a lot of very fast flowing water & without seeing a trout I was seriously thinking about another move. Knowing that there was still some good water ahead of me I decided to push on to the end.

The decision was a good one, still using the Aglia Furia I approached another stretch of fast water that has a nice small flat water next to the river bank on the opposite side of the river. That flat water is one that has quite often given up a trout on many other trips I've had here. It did again today, a small brown snapped up the spinner no sooner it had hit the water. At long last I had caught my second trout of the morning at 8:50 am. A little further up I hooked and lost another small brown, then not long after that fish I hook and lost another one. I was losing more trout that I was catching so I wasn't all that impressed with how the spin session was going at this stage. I was into the last two runs of fast water before calling it a day, it's a stretch of water that I really like, another one that often gives up a trout or two. I hooked & lost two more trout in the first fast water which ticked me off even more so. I new the reason for losing the trout was because I had cast directly upstream then retrieved the spinner straight back down. This regularly happens when casting directly upstream & 90% of the time one will lose the fish.

What happens is the the trout come at the lure from behind and strike the lure on the turn, so nine times out of ten they're just lipped and toss the lure. Once out of that short fast water I was into another medium to fast flowing stretch of water, it was here I had a trout take the spinner on the second cast into a shallow run to the left of me. I spotted it following the spinner then as it drew close to it I gave the rod a light twitch to make the spinner blade flutter and that's when it took it. It was the biggest trout of the three, a nice solid fish 390 gram brown. After it's release I concentrated my fishing to a deeper medium flowing stretch of water to the right of me. The first couple of casts I had two small/medium size browns follow the spinner before turning and moving off. The next cast was up and across the river when a small brown took the spinner, after it did a dance across the water it tossed the spinner.

Another cast into the same area resulted in another take, this fish stayed deep and I knew it was a decent fish. It fought like hell making several runs every which way before it made a leap from the river which I didn't want it to do in case it tossed the spinner. Thankfully it didn't make any more leaps from the river, it slowly tired & I slipped the net under it. This was the fish of the day and a great way to call it a day, it went 520 grams. It had a scare half way along it's back which looks like it had been hit by a cormorant. It was released back into the river no worse for wear, hopefully to grow into a much bigger fish. 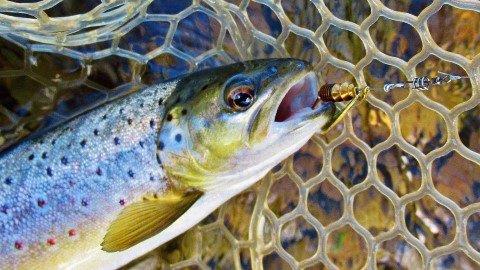 Close up of brown trout and Mepps Aglia Furia spinner 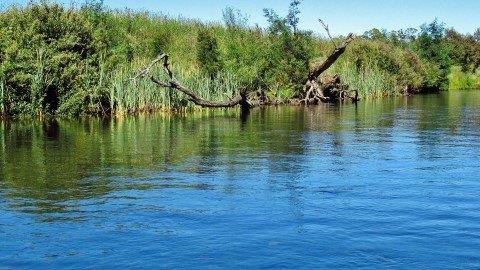 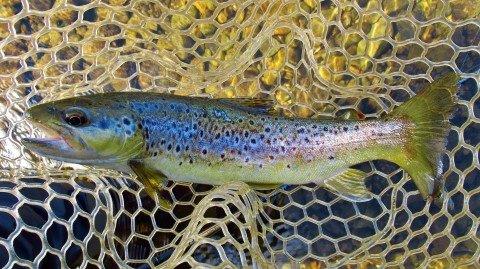 Fish of the day 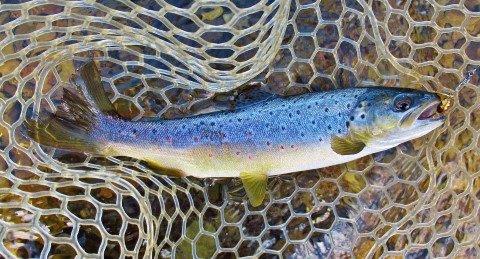 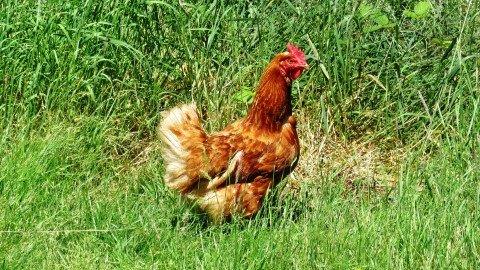 Had a visitor when I was back at the car