I don't know what the odds are but just over two years ago I lost a small Atomic shad40 lure in the Meander River when for some reason the line parted & the lure kept going and lobbed in the middle of the medium flowing river. It was a slow sinking lure & I did go and have a look for it all to no avail, it had more than likely disappeared between the rocks on the river bottom. A week later I was back in the river and while fishing the same stretch of water and decided I'd have another look for the little ghost gill brown lure. I roughly stood in the same area from where I had cast the lure a week earlier and sort of had an idea of where the lure had landed. I then had a guess of where in may have drifted to as it slowly sank. Good thing was that the sun was out this time where as the day I lost it it was a dull overcast day. Any way I headed out to where I thought it may have drifted to.

Looking into the water with the polaroids I could not believe what I saw first up. I spotted the gold reflection of the Atomic brand on the lures back, the lure had wedged itself in an upright position between the rocks in 90 cms of water. Had the sun not been out I doubt I would have found that little lure, not only that the sun must have been at the right angle to reflect the gold brand name on the lure. Now what where the odds of finding that little 40 mm lure a week later in medium flowing water with a very rocky river bottom. It was just pure luck or what, anyway it was back in the tackle box with the only other one of it's kind I had at that time.. 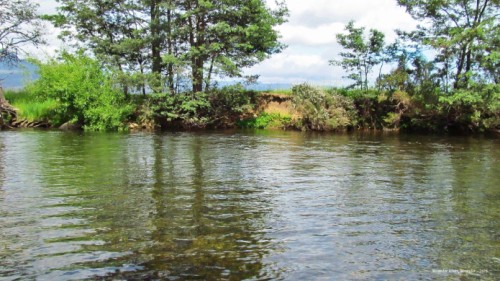 This was back in 2016 where I first lost the little lure..

Well yesterday a similar thing happened.. Hard to believe too, it was in the very same river and yes, the same stretch of water as well. This time it was around five meters further down stream from where it first happened two years ago. This time the result in finding the lure was a little different but losing it was exactly the same as I did before. A long cast saw the lure part from the line and lob in the middle of the river. I was in luck today because the sun was out so I thought I was in with a good chance of finding it.

I slowly made my way to the middle of the river and started looking around but couldn't see it any where at all. I dug my wading boots in and around the rocks to see if it bobbed up or put it at an angle that the sun may give it up. Nothing, I didn't spot it anywhere, all I did was to stir the bottom up so I conceded defeat and put it down to being lost, never to be seen again. I continued to fish my way upstream for another hour without any signs of a trout so decided to call it a day here and head elsewhere. I had lost a top little trout lure and not caught a trout, not a good day at all. It was really a day I should have stayed home because my lower back & hips weren't all that good when I got up at 5:00 am, but I was determined to chase the trout.

I did managed three hook ups, but my reaction timing was way off today.. Too many pain killers for breakfast I reckon..

After a twenty minute walk through some bush & high grass I was finally back at the car. I opened the boot and sat down in the back of it, cooling off with a cold Pepsi Max I was thinking what a poor day it had been chasing trout. While I was sitting there with my head down I happened to look at my wading boots, I couldn't believe what I was looking at. Bugger me if it wasn't the little Atomic ghost gill brown lure stuck in the soft cloth on the top of my right boot. Some how when I was in the river moving the rocks around the trebles must have locked onto my wading boot. I sat there staring at it in disbelief, that the little lure had been found again.. I thought the odds of finding it before were high, so what were the odds of finding it again, even stranger it was the same lure in the same stretch of water... Not only that, how it stayed there all the way back to the car after that twenty minute walk through the bush & long grass.. Unbelievable yes, but true it was.. 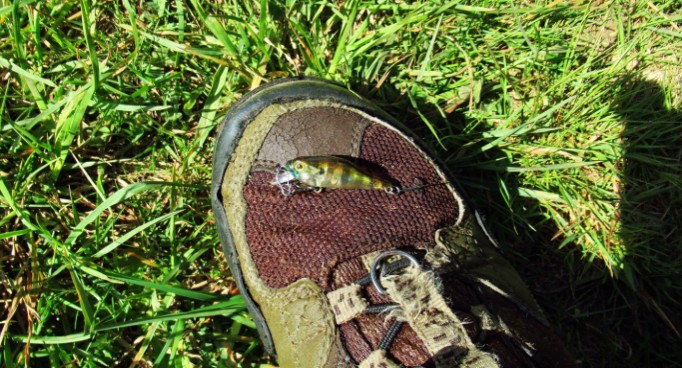 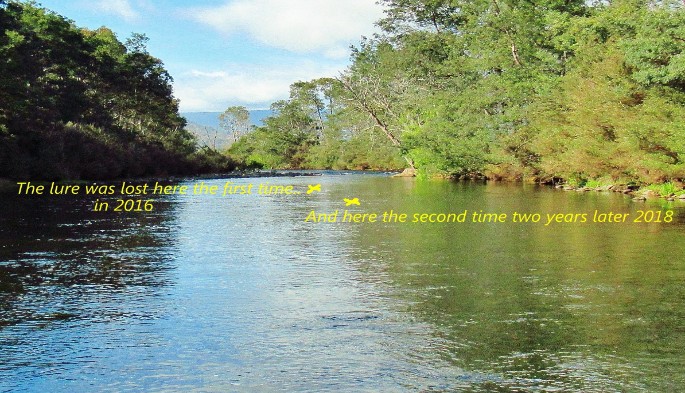